Mt. Redobut has Erupted (Thanks for Telling Me!) 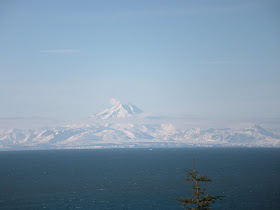 Photo of Mt. Redoubt on Thursday, March 19, two days before the eruption,
taken from Sterling Highway just south of Ninilchik.

Mt. Redoubt has officially erupted as of last night. The "explosion" that occurred a week ago (Sunday, March 15) has finally been called a "minor eruption." I was grateful that my husband emailed me this morning and told me that Mt. Redoubt had blown; otherwise, I would not have known. Shortly after I found out about the eruption, the electricity went down, and then shortly after the phone line went dead also. This was not looking good. Halfway into Homer I was able to get a cell phone signal and the college had left a message: classes are still being held even though there is no electricity. Hey, flexibility is key here, right?! Come to find out, the electricity was an issue with Bradley Lake Dam across Kachemak Bay and completely unrelated to the volcano (the electricity came back on just before my 10:30 a.m. class), but it certainly added to the suspense! Many of my students didn't even know Redoubt was erupting, and others found out from friends or family in the Lower 48 who were watching the news.

So now we just have the volcano continuing to erupt , though we wouldn't know it to look out our window. Life goes on like usual--besides that "edge" and attentiveness. The windows are covered, electronics wrapped in plastic when not in use, masks and flashlights are handy, extra water stockpiled. According to the AVO volcano watch website (http://www.avo.alaska.edu/activity/Redoubt.php), eruptions could happen at any time and could continue for weeks or months. As of now, "The explosions also destroyed one seismic station near the volcano's summit (RSO), and disrupted telemetry from AVO's obsveration hut." This is annoying; for the past several months the seismograph readings and webcams have become part of my life, like breathing and eating, so it is frustrating not to have these connections to what is going on at Redoubt.

I seriously hope the electricity and phone lines don't go out again, because those are our connections with the rest of the world, and we don't know what's happening if we can't turn on our computer or radio! Meanwhile, home seems like a good place to be!
Share