What Some Alaskan's Do for Fun! 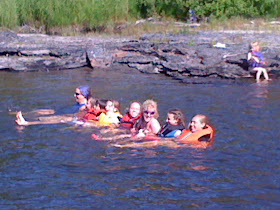 Each summer we spend a week in Ninilchik at my aunt and uncle's for Vacation Bible School. A number of people stay there for the week so it has become a tradition to go swimming and floating in Deep Creek each July during VBS. We'd never been part of it before, but it was one of the highlights of the week for our kids. 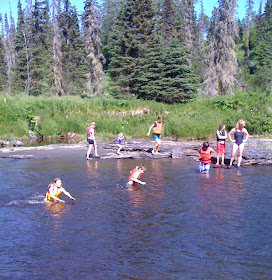 We get life preservers on everyone, find a good spot to head in with the deepest water (not more than 4 feet anywhere) and strongest current, and then let go and float down! This year we lucked out and it was actually a little bit hot--64 degrees in the shade! I wasn't going to float, but it looked like so much fun I broke down and did it. I was impressed that I was warmer when I came out of the water than in in (normally once you're wet the wind makes it chillier to be out of the water than in!). The water was surprisingly warm too. I'd waded in that water before and it was so cold your feet hurt within minutes. I stood in the water for 10 minutes before jumping in with no loss of feeling in my feet!

The clincher was that just as we were done wading someone discovered bear prints in the mud of the coal bar that we'd been walking on (seen in the picture). It looked fresh within a couple of days. We'd had a heavy rain two days before, and there were a few water drop marks in the track, but for the most part it was a clear track. Apparently if you can see the claws it is a grizzly/brown bear, and the claw marks are clear on the front paw print of the picture below. Obviously we'd been walking right by these tracks for an hour without even seeing them (the footprint next to the hind pawprint was not done on purpose for the picture). The kids weren't overly nervous, but we did look around a bit after that, just to make sure we weren't being stalked!! 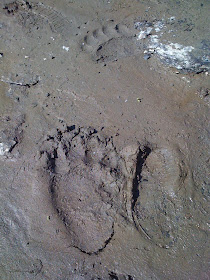