Finding good fundraisers for sports teams and other groups is a huge deal in Homer.  The high school teams must raise $100,000 a year in travel expenses, on top of regular fees and out-of-pocket expenses from families.

Here's how parking lot sweeping works:  The coach or parents contact businesses around town that might need their parking lots swept of the sand and gravel that's been layered on all winter.  Generally if a group does it, they get dibs on it each year unless they give it up.  The kids and their parents show up at the assigned parking lot at the agreed-upon time with brooms, wheelbarrows, shovels and masks.  They sweep the sand into piles, it is shoveled into barrows and dumped, usually off to the side of the lot, though not in ditches.  For their work, they get $150-200 or more for the lot, depending on the size of the lot and the generosity of the business.

This year it seemed there was a lot of toe stepping as certain coaches tried to get parking lots away from teams that had always done certain lots.  The track team got a couple parking lots and swept them today (hard, dirty work!).  Ironically, another group was sweeping a parking lot right next to ours.  And as we swept a lady drove up and said she knew of a business owner who needed their lot swept and would we be willing to do it?  (We said maybe!)

We had a good hardworking group of kids and parents there today.  We are earning money for a running camp in Oregon this summer.  After 2 hours of work each family will get about $50 towards their camp, which isn't too bad as far as fundraisers go.  This isn't my favorite fundraiser, but on the other hand, it is less torturous than others, and I think it is a good thing to work with our kids to help them earn money for things they need, like a pricey camp.

Softball Practice on the Spit

Heavy snowfall this winter has presented a challenge for spring sports.  Although temperatures have been above freezing during the day for almost a month now, there is still snow on the ground, and where the snow has melted it is still wet and mucky.  Today as we were walking on the Spit trail we were tickled to see the Homer High School girls varsity softball team practicing in a tide zone.  At high tide this area is covered with water, but it provided a good field (albeit a windy one!) for the girls to practice on.  One girl was late and had to jump across the incoming stream of the high tide.

I appreciate the creativity of the coaches in finding ways to make practice happen.  This was certainly better than the boys team, who saw the baseball field was free of snow so went up there to practice and large gouges of grass were obliterated where boys had slid.  It was with good reason that all sport games scheduled for this weekend (soccer, baseball, softball, track) on the Kenai Peninsula were cancelled.  Everyone is hoping but not too hopeful that they'll be playing games next week.  Right now the middle school track season has been condensed to 1 1/2 weeks (all 4 meets in 8 days!)...but that's only if enough snow is gone for Thursday's meet to be held.

I don't know if the girls appreciated the view, but it was a glorious sunny day and the mountains were gorgeous!  Plenty of people pay money for this view, which we get every day!
No comments: 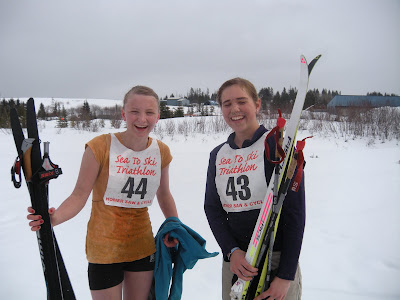 Gutsy girls did the ironwoman section of the Sea to Ski Triathalon--5k run, 7k bike, 5k ski. Looks like they had fun from finish line smiles!
Once more my daughter surprised me. The Kachemak Ski Marathon wasn't enough--she wanted to do the Sea to Ski Triathlon. Aurora was going to get a team together and do the run, her friend Ziza was going to do the ski, and they tried to find someone to do the bike leg but were unsuccessful. Days before the race they decided they would both do the entire race together. Two days before the race it occurred to me that Aurora doesn't even own a bike anymore, and ours are too big for her so I would need to find a bike for her. A willing friend who is the same height as Aurora fixed that problem with a very nice mountain bike. Saturday I took the girls out to the spit for a bike ride; neither of them has ridden a bike more than 5 times in the past 2 years so they wanted to make sure they knew how to do it! After the bike ride I drove the course so they could see where they were supposed to go. 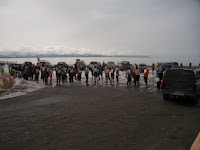 The course starts at Mariner Park near the base of the spit (the 'sea' in Sea to Ski!). A 5k run of flat or gradual uphill follows the Sterling Highway up to West Homer Elementary. There the racers grab their bikes (or if they are part of a team, tag off their team member) and head up West Hill Road (up, up, up the ridge in Homer--ALL uphill!) to Highland Road, a dirt back road that meanders along over to Roger's Loop Road. The Highland half of the road was in good shape, hard packed dirt and not too wet. As it made its way up in elevation to the Sprucewood side, the road was covered with inches of slush with 2 ruts where cars had driven, with rivers of water running down the ruts. Yikes! This was the point I told the girls they could ditch now if they didn't want to do it, but they both agreed that it looked like FUN! Coming out to Roger's Loop, a right takes them 1/4 mile to the skiing portion (for a total of 7k of biking) where they ditch their bike and helmet and don their ski boots, grab their poles and ski away for the final 5 kilometers. The ski portion is mostly flat and a very fast, fun section--a breeze after that bike ride. 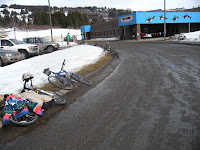 The girls were convinced they wanted to do it, and were just going to have fun and not be competitive (ha!)....just finish. As their pit crew, I was making sure they had the gear for each leg of the race, which felt crazy--run (running shoes and clothes), bike (helmet, bike, gloves, jacket) and ski (skis, poles, boots, dry clothes, dry gloves), and drink and food at each stop. And of course I had to have a camera. 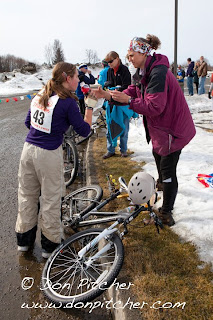 This year right around 40 people signed up for this, down from over 120 last year. I suspect that slushy, snowy road scared many people away! Few kids were doing it, and fewer (if any!) were doing the whole thing, so the girls were a bit nervous that maybe it was too much. The parking lot at Mariner Park was a slushy mess when we arrived at 11:30, and by 12:30 for the pre-race meeting it was under 5 inches of icy slush water. The temperature was right around 40 degrees, which everyone agreed was delightfully warm (it's all relative!). People were hopping from ice berm to ice berm to avoid soaked feet. The start was moved from the beach to the entrance to the park so the runners wouldn't have to soak themselves crossing the parking lot.

The girls had a good run. When they arrived at West Homer, we had bikes, clothes, food and drink ready. They eschewed food and drink, and didn't want much more clothes (Ziza did the whole thing in shorts and a t-shirt, no gloves or hat!). Off onto the bike! The really nice bike loaned to us served Aurora well and she passed a lot of people on the uphill. After cheering on the girls at one point on the way up West Hill, I rushed up to Roger's Loop to unload all the ski gear. 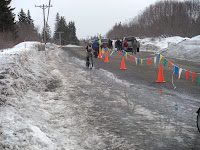 When I arrived at Roger's Loop, it was snowing. I was shaking my head, thinking about Ziza in shorts and a t-shirt, soaking wet and probably freezing. It was really fun watching the bikers come zooming in, dropping their bikes and running over to their skis, boots and poles standing ready in the snow. The organized pit crew who had done this before had milk crates for the athletes to sit on while they changed into boots. I dumped out one bag of clothes and had the girls sit on that. Aurora came through looking strong. The first words out of her mouth were, "That bike was SO FUN!" She was bubbling over with enthusiasm. 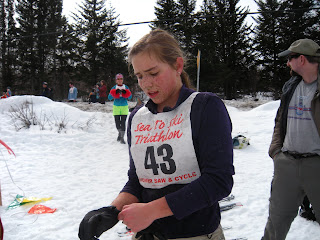 I helped her get her shoes and socks off, got fresh gloves on her hands and off she went. Soon Ziza came through and the first words out of her mouth were "That was SO FUN!" referring to the bike ride. I offered her a jacket, but she said she was hot so she skied off through the falling snow in her soaked t-shirt and shorts. I was shaking my head thinking her mom would kill me!

After grabbing bikes and loading up, I dashed off to the finish line at the DOT parking lot on the Sterling Highway, the same place we'd finished the Kachemak Ski Marathon a few weeks ago. Not long after I arrived Aurora skied into view, smile on her face. She looked very muddy...and very happy. Shortly after Ziza arrived, zooming in at a super race pace with great technique, smile on her face. The girls were full of giggles and stories, and had fun raiding the snack table (Reese's peanut butter cups even!). A plethora of door prizes allowed every competitor and volunteer to get not one but two prizes in the raffle.

I have always wanted to do the Sea to Ski but never gotten a team together. Now that I've gotten an intimate view of how the race works as pit crew for Aurora and her friend, I think I may be ready to do this! Like Aurora said, the bike uses different muscles than the run, than the ski, so they were complementary. Both the girls are jazzed and looking forward to doing this again next year. They both came in right around 1 1/2 hours, so I'm sure they'll want to do better next year, though the course route and conditions vary from year to year making cross-year comparisons iffy at best! 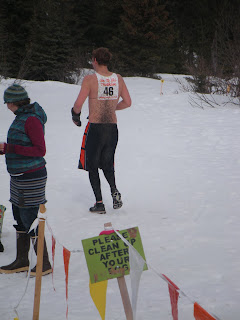 A daring competitor just got his skin dirty instead of his clothes in the muddy bike leg of the triathlon!
10 comments: