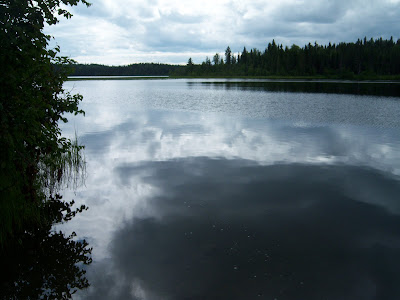 The lakes we canoed are just what I picture the Boundary Waters to look like.
Ever since I was a kid growing up in northern Wisconsin, I wanted to go on an overnight canoe trip, and it has been my dream to canoe the Boundary Waters in northern Minnesota. When we moved to Alaska, one of my friends and I laughingly said I'd have to fly down and we'd canoe the Boundary Waters together. While Alaska is a long ways from Minnesota, I am pretty sure my recent canoe trip with my son's Boy Scout troop had some things in common with that trip I've dreamed of all my life. And now that I've experienced carrying 4 canoes, 1 kayak and 3 days of supplies over 7 portages, I no longer dream of doing it again! But I get ahead of myself. Here's our adventure: 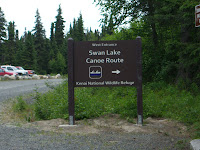 When I heard Denver's Boy Scout troop was going on a 3-day canoe trip, I wanted to go, but I wasn't sure they would let a woman go with Boy Scouts. The scoutmaster was gracious and I joined him and one other parent on the trip, along with 6 scouts ranging in age from 11 to 17. I'd received drybags for Christmas in anticipation of a boating trip of some sort (this is Alaska, where there is water everywhere!) so Denver and I packed our gear in them. I wasn't sure how to pack at first, but after talking to the scoutmaster I realized that I should pack for a canoe trip with portages like I would pack for a backpacking trip. I'd just done that a week before and still had my equipment out so it was a cinch, adding ziplock bags over anything that didn't fit in drybags.

We met at 8:30 on a Friday morning, loaded up a couple pickup trucks and headed out. No trip from Homer is complete without a stop at Fred Meyers in Soldotna for a potty break and to pick up last minute supplies or food, so we battled summer crowds and then we were back on the road. 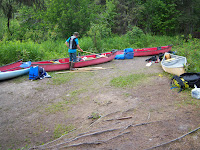 In Sterling just past the elementary school there is a turnoff marked by a brown recreation sign. We turned down that road and drove the gravel for 45 minutes to the Swan Lakes trailhead. Once there, the fun began. We unloaded all the gear, canoes and kayak and carried everything 150 or so yards down to the first lake. Supplies were divvied up between the canoes, with the one 17-footer getting the heaviest load. Supplies were bungied and tied in, life preservers secured and we shoved off. 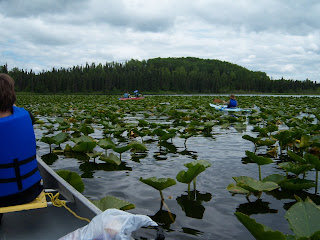 We looked around the tiny lake and then realized that we were going to have to paddle through the daylilies. It was novel and exciting for a little bit, but we soon got used to it. We broke through the lilies into the main part of the lake, which twisted and turned, till we spotted the little brown canoe sign that indicated the take-out point.

The scoutmaster had been on this route a couple times before and he said there was a narrow stream that led to the next lake, but we might have to get out and drag the canoe through some places if it was too shallow. He didn't think his 17-foot canoe would make it through. Denver and I opted to portage with our canoe and his while the rest of the group paddled through. Just as we pulled out, a group with 4 canoes was heading down the trail towards us, so it was a mess jockeying around each other. Denver and I had our backpacking packs on full of gear and were trying to carry the canoe too. It was a recipe for failure. A kind man in the other group offered to finish carrying Denver's end of the canoe the rest of the way, and Denver carried his gear to the end they were putting in at. By that point I was hot, sweaty, exhausted and dreading the rest of the portages. The rest of the paddlers were waiting for us, having made it through the stream with no problems.

We got our gear loaded up again and set off. Less than 5 minutes later it seemed we spotted the 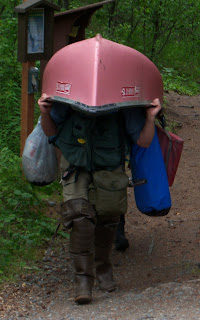 take-out point sign, and with a sigh, started the process over again. This portage was a bit longer (1/4 mile?), but the trail was flat and in pretty good shape. We no longer tried to carry our gear and the canoes at the same time. And we were working out a system for who carried what and how to most efficiently carry the canoes and kayak. Denver was so much shorter than everyone else that I ended up assigning him to carry gear back and forth, so he usually made 3 trips back and forth from one end to the other of the portage, while everyone else made 2 trips: one for gear and one for a canoe. By the trip coming home the best system was discovered: hook on the drybags to the canoe and carry it on your shoulders. I didn't actually carry a canoe like this till the final walk back up to the staging area at the end, and I was amazed at how easy it was compared to hauling gear in a straightarm hang or some other contorted way. Now I know. I got such a good workout that I am still sore from the portaging a week later!

Soon we got into our routine of put in, paddle, take-out, unload and haul, load up and put in again. This was interspersed with conversation, snacks, potty breaks and just a tiny bit of complaining. Mostly, we just put down o 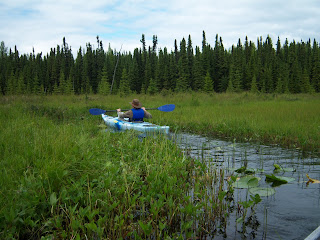 ur heads and did what we had to do. I spent some of my time pondering what food I was carrying that was so gosh-darn heavy. I discovered that it was a bottle of syrup, an entire box of pancake mix, scads of oatmeal, among other things. We ate well, and I worked for it!

After 4 portages (3 for some of them), we had a river portage. This one was fun as the river twisted and turned through the grass, and if we pushed off the banks we could go really fast. Once we got through this river we were in Spruce Lake, our destination. There were 4 'developed' campsites on this lake (you know from my prior blog posts that 'developed' doesn't mean much!), one on the right side of the lake when we came in and three on a nice level grassy bench with poplar trees on our left. We opted for the middle one of these as it had a nice launch area and had the largest grassy area for pitching tents. As you can see from the picture, it looks like previous groups of Boy Sc 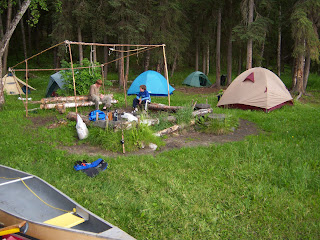 outs had a lot of fun 'developing' this campsite!

Within 10 minutes of landing the kids had their tents set up and were back in the canoe paddling around the lake and exploring the camp area. It had taken us 4 hours to paddle across 5 lakes, make 4 land portages and 1 water portage. It was 6:00 p.m. What a process! 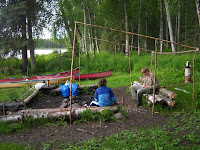 The camp was beautiful and comfortable, with even an outdoor bathroom (which no one used since it was in full sight of the camp!). There were virtually no bugs. I put bug spray on the first evening to deter a few mosquitoes, but after that never even thought about bugs though I was prepared with headnets. Loons were calling back and forth, we saw a momma swan with 4 lit 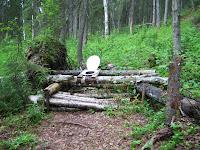 tle babies cruising around the lake, occasional eagles flew over, and the temperature were typical 55-60 degrees, which is what we are used to most of the summer in Alaska. It was very peaceful, even with Boy Scouts running around, whittling swords out of sticks, planning mock fights and all the things that boys do.

I had more fun on that canoe camping trip than I've had in a long time. The kids were great, the conversations good, the weather excellent and I had a good book. Because I wasn't in charge and I did not want to take over and 'mommy' the kids, I held back and let them cook and clean, giving me a lot more leisure time than I am used to when it comes to meals. We stayed until Sunday morning so had a full day to loll around, chat, explore, read and play. I don't normally plan on days of 'doing nothing' into our camping trips, and I discovered how delightful it was! Best of all, I got to see the inner workings of a Boy Scout trip. The quantity of sharp objects was amazing, the amount of industrious building and creating was fascinating, and the level of 'niceness' of the boys was just cool. I can't say every outing is like this, but I sure enjoyed this one, and it was worth every sore muscle!

that had to be a exciting canoe trip, Here in arizona I have just taken my canoe on the lakes. I would love to go on a over night river trip.