The day after the Slaughter Trail we'd opted to raft the Kenai River, figuring we'd need a break physically.  While we weren't as sore as we'd expected, it was still nice to take a break from our daily 3-5 hours of strenuous exercise.

There are 3 major and a bunch of minor rafting companies in Cooper Landing.  We'd picked up brochures for all of them.  Many specialized in fishing float trips, and we weren't at all interested in those.  I appreciated the brochure for the Alaska Rivers Company because they had their rates published in their brochure, and they had the most different trips to choose from.  Of the ones we were interested in, it would have been a 3 hour float from Cooper Landing to Jim's Landing, all along the Sterling Highway, or the 7 hour "adventure" that included class III rapids, a float through the Kenai River Canyon to Skilak Lake, lunch on the beach of Skilak Lake and then either a boat ride across Skilak Lake or hike up Hidden Creek Trail.  Although 7 hours sounded like a really long day, it sounded more exciting than a 'float' so we opted for that one.

We didn't need to bring anything with us as they supplied wet gear, rubber boots, life preservers, sunscreen and lunch.  However, we brought some of our own wet gear, extra snacks and water, as well as a camera.  Come 11:00, the 9 of us on this trip walked down to the dock and hopped into the boat one by one.


I knew this wasn't going to be a wildly exciting day, but I was curious about the view from the river, as we've driven by the Kenai River so many times on our way to Anchorage.  A view of the Russian River Ferry was one of the things I'd hoped to see, and I got a good view of it.  It takes the ferry about 1-2 minutes to get across the Kenai River, and they charge $11 per person to go across (round trip, I assume), ferrying fishermen to the prime fishing spots on the non-road side of the river.  The ferry used to run 24 hours a day, taking advantage of long daylight hours, but after a person got mauled by a bear along the river in this area last year they now close at 11 p.m., though fishing does continue 24 hours.

The fishing season just opened June 14th for the first run of salmon, and it was a Saturday, so the river was packed, with shoulder to shoulder fishermen for miles it seemed.  Our trip guide was telling us of a time that he and his buddies had fished in this area and they caught a fish with every single cast.  That is the thrall of fishing the Kenai, though I suspect that people who come here must not mind or actually like the crowds.  Personally, I found a strange fascination with floating by hundreds of fishermen and seeing them casting, again and again, only feet from the next person.  Some people had boats, others had a whole family on shore behind them.   Some were eating, some drinking.  Some people had hip waders, while most had chest waders.  Some looked very experienced, while others were quite inexperienced even by my untrained eye.  There were youth all the way up to the very old, male and female.  There were many nationalities and body sizes.  It was by far the most interesting part of the trip seeing the fishermen close up.


The boat landings were busy too, though we stopped at Jim's Landing for a bathroom break and, according to our guide, sometimes it is difficult to find a spot to land.  With the current ripping along at 4-6 mph, it takes some skill to guide a raft into a small spot on a launching dock.


The Class III rapids were not all that exciting.  Water sloshed into the boat a few times, and that was the extent of the excitement.  The closer we got to Skilak Lake the wider and slower the river got.  For us the other interesting and valuable part of the day was our guide, nicknamed Torch.  He was born in Kodiak and grew up in Soldotna and has been guiding on the river for 8 years.  Just the day before he'd climbed one of the peaks in Cooper Landing and snowboarded down it (obviously, one with snow on it!), and then in the evening climbed the Slaughter Trail, for a total of 7000 feet of climbing.  He'd hiked and biked and adventured plenty and knew the trails and had lots of stories to tell, so we were thoroughly entertained.  And as with any time adventuresome Alaskans get together, stories are swapped, exchanging information on the level of daring, skill and conditioning of the storytellers.  While we've only been in Alaska 5 years, we still have our share of stories to tell.

I did ask Torch the most exciting or dangerous situation he'd been in in the 8 years of guiding and he had two to tell.  One time he took the raft down a side stream because there was an eagle on a tree along it.  As they were floating along they suddenly saw a brown bear in the middle of the stream.  The channel was narrow enough that they only way to get past it was to run it over so Torch rowed to shore, had everyone get out (with the bear right there!) and he pulled the raft upstream back to the main channel and got everyone back in.  Another time he was going along when a float plane came up the river at him for a take-off.  The only problem was there were powerlines above his raft, and there was no way the plane would be able to get above the wires in time.  He started to row to shore but there wasn't enough time.  The plane took off, squeaking by under the lines and almost within touching distance of the raft. 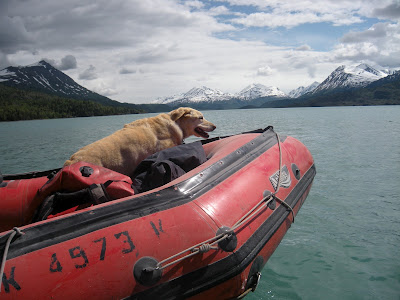 When we got to Skilak Lake, another raft (this one with a motor and dog!) met us.  They tied the two boats together and headed for the beach for lunch.  Until now it had been a sunny day and we'd been comfortable in our rain gear.  Now the wind picked up and sun disappeared.  We went from comfy to freezing in a matter of minutes.  We had some extra clothes we'd brought along, so we put it all on--jackets, hats, gloves--and added more raingear on top of our own raingear.

Lunch was simple:  deli ham or turkey on your regular, store-bought bread, carrot sticks and hot cocoa.  After we ate we were given the choice:  we could ride the motorized raft 5 miles across Skilak Lake to the Upper Skilak Lake boat launch, or we could hike the Hidden Creek Trail up to Skilak Lake Road and get picked up there.  We've hiked that trail before and can do so any time, so we opted for the boat ride.  I was glad we did.  We had a different guide to get to know, swap Alaska adventure stories with and quiz about trails.  Come to find out he'd been at the Sea to Ski triathalon in Homer this spring along with our guide Torch and another guide, and they thought they remembered Aurora.  We also got to place the many hikes up peaks around the lake that we've been on, from the lake perspective, giving us a better feel for the lay of the land. 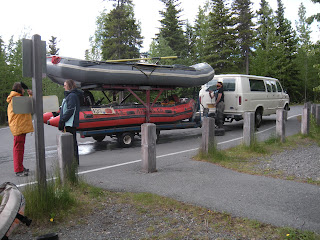 Our guide said he has seen Skilak Lake go from glassy calm to 10 foot swells in 15 minutes.  This lake is the deadliest lake in Alaska, with more people having died on it than any other.  It is a combination of being glacially fed (very cold; low survival time) and surrounded by mountains, as well as winds coming off the glaciers.  Sometimes people don't get a choice about whether they hike or ride if the lake is too choppy.  A few summers ago there were 12 days that the lake was too rough to boat after a trip.  In that case they stash the rafts and get them later once the lake calms down.  That summer, though, there were so many consecutive days of bad weather that all of their rafts were stashed and they had no rafts left to give trips on.  Bad weather or not, they had to get some of them out of there, which was a hairy enterprise, but obviously our guide was still there to tell us about it!

At the boat launch at the Upper Skilak Lake Campground boat launch our guide got both rafts out of the water and the other two women who'd chosen to ride the boat (from New Jersey and Holland) and our family clambered into the van for the 30-45 minute ride back to Cooper Landing.  Shortly after we turned onto Skilak Lake Road from the campground road we saw a black bear a little ways off the road.  We stopped and watched it before it wandered out of sight.  Just minutes later we saw a young black bear, probably a 2-year-old, scarfing down dandelions on the side of the road.  We watched it for a few moments before it dashed out of sight.  And then just minutes later we saw a third black bear along the road.  This one was large and we got a great view of it (no pictures!  I'm sorry!).  Seeing 3 black bear ended up being one of the highlights of our trip.

Overall we all agreed that we enjoyed the day, that it wasn't too slow paced (it helped that we were tired out from yesterday's hike), and that it was worth it--once.  We would recommend it to others, but it would not be worth doing again ourselves at $150 each (half price for kids 12 and under).  The lunch was disappointing and was a bit late (after 3:00!), but the weather and guides made up for it.  And it is one of those things that you just have to experience.  I say you don't truly know Cooper Landing until you've been out on the Kenai River--whether it be rafting or fishing.  We got to cross that one off our bucket list!

Love to read your adventures and the pictures are so beautiful. Thanks for posting.

Enjoyed read about your rafting trip!
Great details...
We are thinking of taking the trip with the grandparents, who r in their 60s, 70s. Mom is a bit afraid of the
thought of "rapids". What are your thoughts? Is it doable?

This is very do-able by older folks. I would take my mother on this....it is fairly mellow, yet still enough of an 'adventure' to be worth doing. Water level has been extremely low this year each time we've driven by so definately make reservations or call to check on conditions. Have fun!

Ah! Fantastic...Thanks for your response! We are visiting from NJ and are looking forward to this trip to AK. I will soon check out your other postings :) I had come upon this when i was researching about rafting adventure.