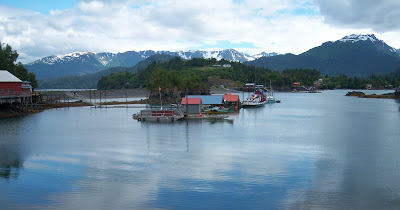 Everyone talks about Halibut Cove like it is 'next door,' and it is--if you have a boat or are willing to pay water taxi rates (@$85 per person). The last time we went to Halibut Cove was 6 or 7 years ago when we were visiting Alaska, long before we ever considered moving here. On July 4th, the group of us that were camped on Right Beach decided to take a boat ride over to Halibut Cove and walk around. 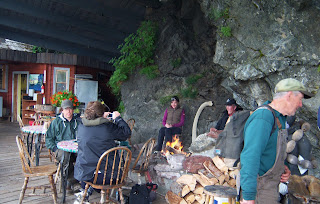 I admit, Halibut Cove is a neat place. We docked at The Saltry, an indoor/outdoor restaurant that abuts a natural rock, creating a cozy spot for a fire and a unique dining atmosphere. Boardwalks wind around through the village, with art galleries, a coffee shop and gift shops scattered along the way. While the population of Halibut Cove swells in the summer months, there is a core of people who live there year-round, including the physician who treated my burned hand earlier this year. That lady grew up in Halibut Cove and lives there still, commuting the 5 or 6 miles across Kachemak Bay by boat to the Homer Harbor to get to work a couple times a week. From what I hear, artists flock to Halibut Cove, and there is an oyster farm there as well. There are many nooks and crannies to explore, whether by land or water, and it is a very popular place for kayakers as well as hikers. We saw a number of very well-kept horses and people out riding, so apparently there is enough space to make it worth saddling up a horse and going out, though we didn't venture that far. 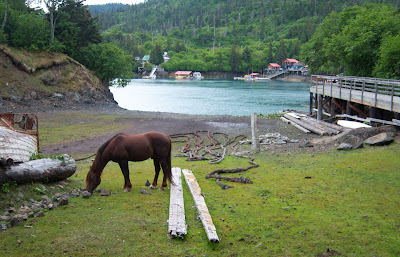 We expected the cove to be hopping with Fourth of July festivities, but besides the Saltry and one gallery, everything was closed. We saw a lively softball game going on behind one gallery, so apparently the fourth is a day of rest in Halibut Cove rather than a day of work. And later that evening as we sat at our campsite on Right Beach (which is on an undeveloped arm of Halibut Cove), fireworks began going off over the village. 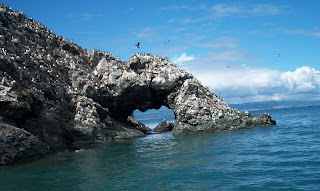 One can hardly mention Halibut Cove without mentioning Gull Island, as it is a big rock covered with common murre, cormorants, gulls, puffins and more on the path between the Homer Harbor and Halibut Cove. We decided to explore the coves, bays and lagoons down the coast towards Seldovia after we were done meandering through Halibut Cove so we made a jog over to Gull Island to check out the teeming seabird life.

There is a sense of special coziness to Halibut Cove, though 'cozy' can at some point feel claustrophobic if one no longer wants to live there. It can be very isolated in the winter when storms come up and batter the shore, keeping boats off the waters. Part of me said, "I could never live here," but I think I would need to explore it more before I said that. And it is the people that really make a place a community, so without getting to know the people there it would be premature of me to say I couldn't live somewhere. It did remind me of my time living on Mackinac Island on Lake Huron (again, cozy or claustrophobic, depending on your state of mind), with the quaint uniqueness of a small town on the water. I do hope to get back over to Halibut Cove and explore more over the next few years.

Try calling Red Mountain Marine. He only charged me $32 one way for Jakolof Bay.

Still $64/round trip--but better than most I've heard of. Was that recently? Rates keep going up...