A friend invited me across Kachemak Bay to stay in a cottage in Jakalof Bay for the weekend and bike, berry pick and explore.  It was a new experience for me to take a water taxi over and stay (I'd taken a water taxi and hiked for the day, and also gotten boat rides over with others, but not the water taxi and then explore with someone who didn't know the area) so I was a little uncertain what to expect.

The cottage we were to stay in had electricity (fridge, microwave, coffeemaker, lights), propane stove for cooking, a woodstove for heating and water in jugs for cooking and drinking.  It also had 2 double bunk beds, so all we needed to bring besides food and clothes was sleeping bags.  I had a hard time getting my head around having electricity in a cabin across the bay, and even in the 2 days of being there, I didn't get used to it.  It seemed like an oxymoron to have electricity in such a remote place.

But I get ahead of myself.  Once we decided to go, we called Mako's Water Taxi and told them when we'd like to leave on Saturday and when we'd like to be picked up on Sunday.  We got within an hour of our requested time.  After stopping at Mako's office above Pier 2 on the Spit Saturday morning, we hauled our backpacks and bikes down the ramp to "the blue boat"--the one boat Mako's owns (they contract out to other skippers and boats when needed).  A group was also heading over to Kayak Bay with their kayaks and camping gear so we all squished into the cabin of the boat to stay out of the rain and wind.  The water was rough, but not overly so, and the conversation was good, so the trip went quickly.  It took ten minutes to offload the kayakers, and then we headed over to Jakalof.

The last time I was in Jakalof Bay was for a very low tide tidepooling expedition based out of Kasitsna Bay Research Center, right around the corner from Jakalof Bay.  We weren't going to have a super low tide on this trip, which was too bad because it is an incredible tidepooling area.  The skipper expertly parallel parked the boat next to the dock and we hopped off and walked the two minutes across the parking lot and up the path to the Wharf Cottage (can't beat that for convenience!). 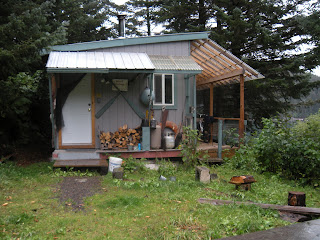 Parking lot? you say.  From Jakalof, it is an 8.3 mile drive up a reasonably good road (it's all relative!) to Red Mountain, where chrome was mined around the turn of the century.  If you take a right out of the parking lot, 10 miles will find you in Seldovia.  Locals drive to the Jakalof dock to catch the water taxi since the taxi doesn't come all the way to Seldovia, and the ferry doesn't run as often as the taxi.  So the parking lot had a good 15-20 cars in it, some in working order, some not.

The cottage was cute--definitely an Alaskan cabin. It was small, but just having electricity made it seem slightly luxurious for this 'roughing it' type place!  A new outhouse out back made for a quick walk to the toilet--a relief in bear country.  In fact, just up the drive there were 3 piles of fresh berry-laden bear scat, though they were just black bear as no brownies live on this side of the bay.

We dropped our bags and bikes and immediately started exploring.  Salmonberries welcomed us, and soon we ran into the owner of the cottage, Carla, who has a log cabin just up the hill from the cottage.  We got to talking, then headed back to her very cozy (as in comfortable, though small) cabin.  A fire was roaring, so it was a welcome relief from the cold, damp outdoors.  We chatted for an hour or two over tea, then Carla offered to drive us up to Red Mountain.  We jumped at the chance! 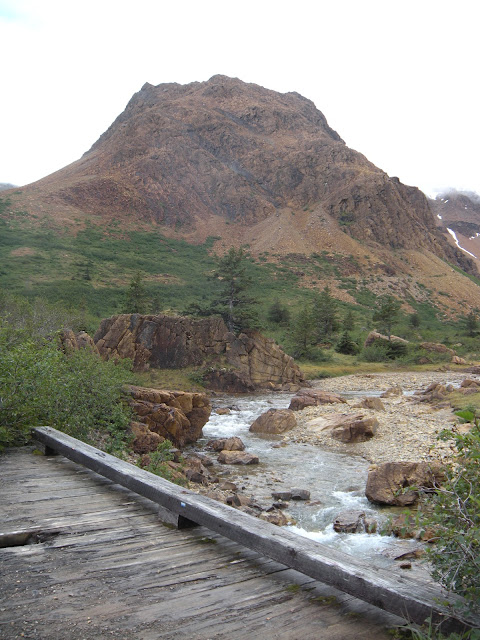 I'd heard about Red Mountain--people bike out there, camp, explore.  I'd also heard it was 8 miles uphill so I didn't relish biking that in the rain.  A ride in a pickup truck by a local who knew everything (Carla has owned land in Jakalof since 1994) was heaven!  We grabbed our sandwiches and headed out.

Red Mountain is just that--red.  The surrounding mountains are all green and brush or tree covered, and there is a line where the green ends, nothing grows, and the rock is red.  It is a fascinating geologic feature, so different from the surrounding area, and like nothing else nearby.  As we wound up the road to the mountain, Carla regaled us with stories of locals, trails, and a wealth of insider information.

Despite what she had said, I wasn't quite prepared when we finally came into sight of Red Mountain.  It was so stark.  Termination dust (early season snow) covered the peak, when the peak peeked out from the cloud cover.  Old roads, now mere trails, to the mine shafts criss-crossed the valley and mountainside.


I admit, I am a sucker for all things wild and natural.  But I understood now why people like to go up to Red Mountain.  On a nice day (it stopped raining for a little bit while we were up there, which is as good as we got) it would be glorious to explore, picnic, just sit and gaze and wander about.  It felt park-like up there with all the red rock monoliths, streams and springs.  The vegetation was scrubby, but not trees, and it could be challenging walking because the valley floor was all boulders that plants had grown over.  But if you're not in a hurry and just wanted to soak it up, it was a magical place.  I'm already plotting going back, but I'm afraid it may not happen till next year.

We wandered about for awhile, soaking it all in and chatting some more (things shared can be so much more special!).  The drive back down was faster than up (about 1500 feet elevation gain from the dock to the base of the mountain where there road ends), and luckily we didn't meet any cars this time.  Going up we'd come around a tight, narrow corner and a big pickup was barreling at us.  With some maneuvering we were finally able to get past each other with no one going off the road.  The guys in the pickup had cleared a large tree that had fallen on the road, so we had them to thank that we'd even been able to get up to the end of the road.

By time we got back to the cottage it was pouring.  We parted with plans to meet up for a glass of wine and more chatting at Carla's cabin come evening, and headed into the cottage to get a fire started, eat dinner and relax.

We let the fire go out after heading up to Carla's that evening and it kept the cottage toasty comfortable through the night.  It had been a full day, even if we didn't do any berry picking or biking, so we were tired and ready to sleep that night.

Weather forecasts for Sunday had been for sunshine, so I was really banking on it being sunny.  How often have I seen a weather forecast for sunny in Homer in the past 5 months?  Like, never.  It was also supposed to be windy, with a small watercraft advisory out for many parts of south central Alaska, so I figured it might be interesting getting back.  But I was leaving the worries to everyone else and just enjoying myself.

But Sunday did dawn sunny though calm, so we got our daypacks filled up with lunch and buckets, bear spray and jackets, hopped on our bikes and headed up the road towards Seldovia.  Well, we obviously weren't too goal oriented because we didn't get far.  We stopped for every berry we saw, got off our bikes, picked and ate, talked, hopped back on, biked a little more.  Lunch happened in there too.  It was a gorgeous day and we kept peeling of layers.  Shorts would have been great, except for all the prickers:  devil's club, salmonberries, currants, whatever, when we wandered off the road to pick.  So I appreciated the heat, just happy for some nice weather.

We got back to the cottage, closed things up and locked up, then headed out to the dock to await the water taxi.  It was late, but we had cell service so called and found out they were about 15 minutes behind schedule.  No problem--beautiful day to sit on a dock and watch all the traffic go by--and there was an amazing amount of traffic.  Trucks in and out of the parking lot, boats in and out of the bay.  I hadn't realized this was such a hoppin' place.  We could see that the water outside of Jakalof Bay was quite choppy--the wind had come up since morning and things were now getting fun out there.

The water taxi ride back was a blast!  We were on a catamaran, and the sun was shining so it was gorgeous.  We picked up a couple other parties from the Kasitsna Bay area before heading back to Homer.  Once out of the protection of the bay, the water got rough--at least 3 foot seas at times.  And it was choppy, not nice, regular rollers.  The skipper was having a blast, cruising along at 25 knots (I don't know why, but that seems amazingly fast to me--particularly in the rough seas).  The boat just skimmed over the waves like they were nothing.  You would never have known the water was so rough if you weren't looking out.  Our bikes, tied on outside, were thoroughly sprayed with salt water and would need a good washing once home.

What this trip did for me is get me hooked on going across the bay like I've never been hooked before.  I've gotten over there 2-3 times a summer since we moved here, for up to a week at a time, but I've always been with other groups and been restricted in my activities.  I appreciated the freedom to stay and be able to go wherever, whenever (well, Jakalof has a road system, so that offers road options!).  My husband occasionally suggests getting a boat and I've squashed the idea, but now I am entertaining that thought myself....!