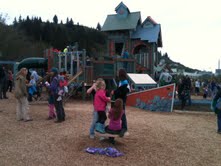 One of the things that continually impresses me about Homer is the number of talented people and the generosity with which they share those talents.  Those things came through so clearly in the past year as the Homer Playground Project (HoPP) grew from an idea into a finished product, fueled by so many dedicated folks. 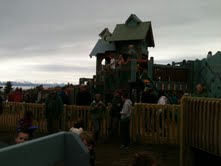 Our kids are past playground age, so when we heard about the HoPP request for kids' input for a new playground, we didn't make it a priority to get there.  In some places I would expect to hear about such input, but the idea might just fizzle and die or take years to come to fruition.  I couldn't say exactly, but it doesn't seem like they've been working on this project for more than a year.  The organization needed to raise over $200,000, a goal which they ended up exceeding by quite a bit. They sold engraved fencing ($50/slat), wrote grants and fundraised to make it all happen.

This week was "Build Week".  From Sunday last week through Sunday (today), hundreds of community members volunteered thousands of combined hours.  Shifts ran from 8-12:30 and 12:30-5 each day, with food and drinks galore provided for those who showed up, as well as entering volunteers into drawings for each shift they worked for a chance to win massages, meals and other cool things.

The day before the build began, Troop 555 Boys Scouts erected a 1000 foot orange fence marking the construction zone.  No kids under the age of 14 would be allowed in the construction zone.  However, there were still activities youth could do, and some teachers brought their classes to the HoPP build site for their end-of-the-schoolyear field trip (Wednesday was the last day of school).  Tasks for the kids included soaping bolts to make them go in easier.  When adults volunteered they were separated into skilled or unskilled:  if you could cut a straight line with a Skil saw you were considered skilled.  Unskilled adults were put to work digging, raking, painting and whatever else needed doing.

When I arrived on the site to volunteer today I signed a waiver, got a duct tape name badge, got a safety orientation, was given gloves and led to the site by a safety personnel who would hand us off to one of the foremen who were assigning tasks.  I ended up helping 2 other folks dig the holes for a bench.  It was a messy affair but it did eventually get done!

When Douglas arrived at the build site at 10:30 this morning he thought to himself, "There is no way they're going to have this done by 5:30 for the grand opening!"  But he left at 2 and we came back at 6 for the food, music and grand opening, and it was indeed mostly done!  There was a bit more gravel to put down for the walkway around the structure and painting, but overall, it was done, from the slide, the water sluice, swings and the main structure.  Amazing!

For me the funniest part of this playground is how 'artsy' it is.  There are so many stylish additions, courtesy of our very talented, artistic Homerites (oops, I guess we're called Homeroids now!).  The biggest bummer is that my kids are past playground age, but this is an awesome addition to our community and something it has sorely needed so I am so glad it happened and I got to be a small part of the process.

And if you want to know more about it, check out the HoPP website at http://www.homerplaygroundproject.org/.
No comments:

Baseball is not one of my favorite sports, but I certainly felt immersed in it the past few days.  Douglas was on the Board of Control for baseball regionals this year, meaning that if there were any disputes, he and the other BOC members would make the ruling.  Thus, he had to stay close to the fields Thursday, Friday and Saturday as the eight teams in the region sought the title.  Part of the reason Kenai was able to host the regional games is because they have a semi-pro baseball league and field, the Kenai Oilers.  The field is just down the road past Kenai Middle School, and I'd walked by it before as I checked out  the disc golf course trails adjacent the stadium.

The parking lot is gravel, the concession stands and ticket booth typically old, worn wooden buildings, and the box seats in the stadium were comfortable, though worn.    I'm always a little startled when I come across places like Oiler Field--they are so out of my normal activities, yet they are one more thing that add to the quality of life/entertainment for people living in the area.  It also made me a little sad going to these games because there were so few spectators.  Even the boroughs track meet a few weeks back got more spectators than a regional baseball game.

While I'm not a baseball fan, I can still appreciate the athleticism of these boys, as some of the games we watched were exciting, including a 3-hour nailbiter of Homer vs. Houston (Alaska).  I wanted to blog about this because it is yet another cog in life in Alaska.
No comments: