A Kayak Trip Across the Bay

I've been out kayaking before in Halibut Cove and on Hidden Lake, but never spent a ton of time on the water. Last spring I was attending a silent auction and won a bid for a full day kayak trip with A Seaside Adventure.  It did indeed end up being an adventure!

As a single person, I was curious who the rest of the group would be.  It ended up being a family from the East Coast with two adult daughters and one of those daughter's husband who were doing a family vacation to Alaska. Ma and Pa were in the 60's and 70's, and Pa was hard of hearing and not wearing his hearing aids. We discovered each other on the dock as our water taxi was late.  They were panicking, pacing up and down the docks, worried they would miss their boat. Once we started talking, I realized it was likely they were more nervous about the kayak trip than missing their boat. Neither Ma nor Pa had ever kayaked before in their life, and I admired their willingness to try it--on the ocean in Alaska no less.

Turns out the water taxi was late because the waves on Kachemak Bay were impressive that day. The ride over turned into a prayer not to get sick all over the boat as we were up and down and up and down all the way over. Once we got behind the Herring Islands, the way was smoother.

I don't know if every trip is as epic to set up, but between getting to Rick and Dorla's spot in Little Tutka Bay late and then gearing up, getting lessons on kayaking and actually getting the kayaks in the water, it was almost noon. I was just along for the ride and not set on making incredible progress so I just enjoyed getting to know the family I was spending the day with.

Pictures are worth a thousand words, so I'll let the pictures (with captions!) demonstrate the day.

Things got interesting after lunch. We were paddling back towards our starting place and there were waves coming in and Rick noticed some rip tides in the area we would need to paddle. As he said, if all the folks were young and experienced paddlers, he likely would have had us push on, but Ma and Pa were struggling as it was so Rick decided to head back to our lunch spot. He called a friend who lived next door to him in Tutka to come and get us, and he left the kayaks there to come back and retrieve them later.

The water taxi was 30 minutes late picking us up, but the ride back was uneventful and smoother than the ride out that morning.  We'd kayaked maybe 2 hours out of the whole day. I heard that other kayak tour places cancelled completely that day, so we were lucky to get that much in.

Even for that little bit being out there, it is an experience that gave me confidence on the water. And it was fun getting to know some new people for a day too!

One of our favorite campgrounds in our early years in Alaska was Johnson Lake in Kasilof. It is relatively close to Homer--only a bit over an hour away--and has a beautiful lake, nice big campsites and some years, berries to pick. We'd given up fall camping for 8 years while the kids were in middle school and high school cross-country running, and have rediscovered the joy of fall camping once again with our empty nest. We didn't even have a full day, leaving Sat. evening after the Homer High football game and coming back early Sunday afternoon, but it was a delightful break nonetheless, even with rain nearly the whole time. The campground was pretty full but peaceful, with little traffic. I managed to find a few lowbush cranberries in the process, which will be wonderful come Thanksgiving! 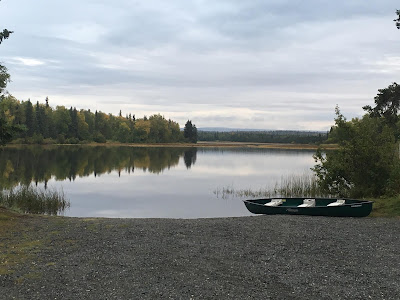 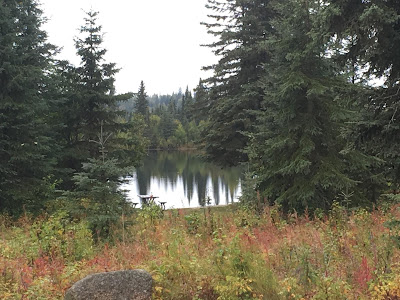 Labor Day weekend we did a mish-mash camping trip that included a visit to a relative in the hospital in Anchorage, shopping in the big city, a night in the Bird Point Campground just south of Anchorage, then a jog on down the road to Trail River Campground just south of Moose Pass on the way to Seward. We got some biking in, some hiking, and explored places we'd never been before.

One of those places we discovered was Vagt Lake. We weren't intending to go there; the plan was to find the Falls Creek Mine or Falls Creek trails, neither which I'd ever heard of before, but which we'd stumbled across the day before while hiking from the Ptarmigan Campground.  But we didn't find the parking area for either of those, and having passed them I suggested we pull off where the Trail River outlets from Trail Lake and check it out. It led us to one of the most gorgeous, scenic views we've seen--courtesy of the soft fall morning light and an incredibly calm morning.

The trail was only a mile, graveled and mostly flat so very accessible. There's a nice picnic or tent area when you reach the lake. We started going around the lake but it got grown over quickly and we were just out for a pleasant morning hike so we left that for another time.  Here are some photos from the hike. 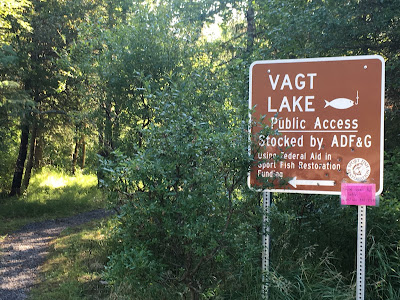 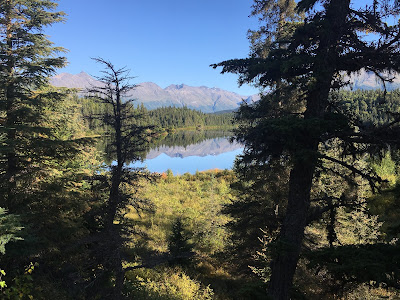 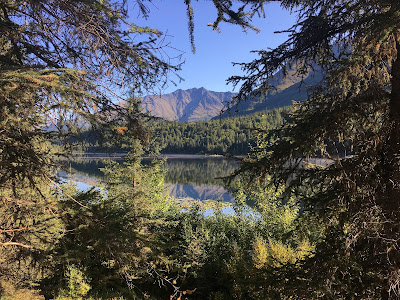 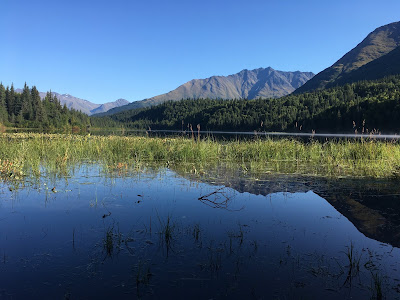 Lazy Day In Search of Berries

Friends invited me to hang out with them in search of berries across Kachemak Bay last weekend. It turned into the most deliciously lazy day I have had in a long time. A late morning leisurely start out of the Homer Harbor included lots of details of affection about their sailboat. Smooth waters made the ride to Halibut Cove Lagoon relaxing, and I appreciated the new dock in the lagoon, having the rigged float dock for a year or two.

A ride back out of the Lagoon with the outgoing tide was exciting. We turned off the motor and rode the current, which was 5 to 12 knots in places. We joined the masses of sea otters that were floating about just off Hawaii Beach, which is the start of the Saddle Trail, floating along with them for another few hours.

Then we took the boat to shore and each took some quiet time, hiking, berry picking, and napping. By time we were ready to go, the boat had gone dry so we had to wait for it to come back in. We got some dinner on the boat while waiting for the tide to rise. We also got treated to an incredible sunset from the beach.

The ride back to Homer was magical, with glassy, sunset-laden colors on the water and the fullness of a day of great conversation, good food, lots of sunshine and a beautiful area. It was a day like no other I've experienced before.

Summer Day on the Spit

After a busy summer that is seguing into a busy fall, I'm finally in a space to think about transferring all my pictures from the summer to my computer, and that leads me to think about all my potential blog posts.  Came across a classic "Homer Spit" picture that I thought I would share:  the Alaska Marine Ferry in the background with families playing on the beach.