This campground has been on my bucket list for years, but it is a stretch for a weekend (5 hours away) and they don't take reservations so it's a long way to drive and find out there's no spot open. But this has been the summer of knocking off many hikes and trips that have been on my bucket list, so I was determined to make it happen.

This campground is definitely high on my list of fun places to visit, and my only regret is that we didn't discover it sooner as it is a family playland. Here are some features:

This place is about 25 minutes north of Anchorage; once you get off the freeway it is 10 miles down a winding road that makes 30 mph seem fast. There is no cell phone access (a good thing, I think!). So once you're out there, you're not going to be running into town since any town is quite a ways away. But it has all sorts of amenities out there to make it comfortable.

To me, this is the sort of campground you bring your family and your toys and enjoy for a week.

Here is my photojournal:

We were over across Kachemak Bay a few weeks ago at a social gathering at someone's house over there, when suddenly a couple orcas surfaced. My husband got out his phone and nabbed a quick view of them, but by time folks gathered to see them, they'd dived and were out of sight. We caught a glimpse of their blows when we were heading back to Homer an hour later, but they didn't resurface like they did in this video. The bouy's are an oyster farm.

This has been the most insanely abundant summer. It started out with a mild winter, and I'm not sure we got a frost at our place (varies by location around Homer) after mid-April; I could have planted my greenhouse then, but I kept waiting for the late frost that never came. June was dry and warm. It was a little scary because usually when I weed, there is moisture in the soil 3 or 4 inches down. This year there was no moisture in the soil up to 8 inches--bone dry. We got a week of rain the end of June and only the top 3 inches were moistened; it was still dry below that. For a gardener, I found that scary. Partly because I pay 6.5 cents per gallon of water and I can't or don't want to water as much as the garden would need to get down to the roots. But partly because I'm always sensitive to our environment, and the lack of snowcover this year likely contributed to the very dry soil as the snowmelt offers timed release of water.

In mid-July it started raining, and it seems like it was rainy or cloudy every day until yesterday, though I was gone for 3 weeks of that time, so I couldn't vouch for that. But suddenly we found ourselves watching for the rare period that the grass was dry enough to mow, and it felt like we were haying rather than mowing. Instead of being like 'normal' Alaskan rainy days, it was warm along with the rain rather than cool, making for crazy growth.

This is the year of the berries. I didn't know blueberries grew on this side of Kachemak Bay, but this summer, I am finding them here, there and everywhere in abundance on the Homer side, and others have mentioned this as well, so I know it's not just me. I thought I'd been missing them all these years!

By August 1 my quota of berries had been met, a whole month earlier than usual:  one shelf in my stand-up freezer. That lasts me about a year worth of smoothies. Of course, with berries right here in Homer, do you think I stop picking? No! It is a problem because every spare moment I want to run out to my favorite patches and pick, because the abundance continues. I lost all of my raspberries this year because I was gone during the crucial first week of August and by time I got home, the slugs and yellowjackets had decimated all raspberries I could find. It was disgusting picking berries (attempting to) because there would either be a swarm of yellowjackets around me or on the berries, and if not a yellowjacket, a slug! Eeeew! But other berries have made up for the raspberries.

My serviceberry plant that got me 1 1/2 gallons a couple years ago and 2 gallons last year got me 3 1/2 gallons this year. I was up on a ladder picking, with, once again, yellowjackets swarming. I am so amazed I didn't get stung, but they were pretty drunk from the berries. They'd literally eaten chunks out of the berries. The slugs had only gotten to the lowest berries that were in the grass so we didn't lose too many to them.

And did I mention the strawberries? I have this tiny little patch that I put 9 plants into a few years ago that was going nuts this year. It helped I beefed up my bird resistance system, covering the plants more thoroughly with chicken wire. Last year I lost a lot to the birds. This year I lost many to the slugs. I even ran into friends buying cheap beer to lure the slugs away from the berries. Despite slugs, I got a great strawberry harvest. 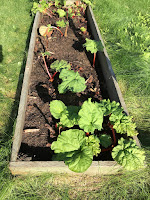 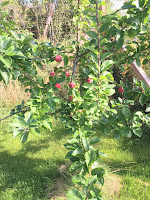 And my apple tree...what a weird thing. A few years ago rabbits ringed two of my three apple trees. We cut the two down, and I'd heard that one tree cannot ever produce apples by itself because it needs to cross-pollinate, so I contemplated cutting the other one down. Low and behold, it blossomed and has apples on it this year--big, tasty apples! Go figure!

Our rhubarb brought in $70 this summer, in addition to providing countless crisps and enough to can and freeze as well. Bear Creek Winery pays 75 cents a pound for rhubarb cut into 1 inch pieces. My kids use it as a way to earn some mad money. Three times this season we cleaned out our small rhubarb patch, pulling the stalks, cutting off the tops for the compost, chopping, and then dropping it at the winery. It is quick and easy, and each time netted us a bit over $20. Otherwise it'll just die and rot, and I'll throw it all in the compost.

I didn't think I would get any fish this year, what with all my traveling, but one of my cousins called me up and offered a trade I couldn't resist:  She would provide the fish all filleted, if I would process (can most; vac-pack the rest) hers for her. Another cousin had a 36-jar canner (24 pints and 12 half pints), so that meant only 2 loads, one for her and one for me. I got to do it at one of my cousin's place, and she had it all set up with cutting boards, knives, and a freezer to throw things into when done. It was a deal too sweet to pass up, so a day later I was back home with 36 jars of canned salmon and 18 frozen filets and a happy cousin. That is abundance!

Alaska always feels like abundance to me anyways, but this summer was just nuts. Homer folks pulled in their hay on May 31, and this weekend are cutting a second round (first dry spell in 6 weeks!). Berries, fish, garden...and just the weather that made it all a joy. Wow. It makes me feel so rich to have a freezer and cupboards full of real, fresh food that we can enjoy for the coming year.
1 comment: