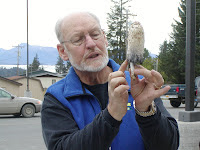 We had our first frost over the weekend. I was startled to have to scrape my car. I took a class called Mushrooms of Kachemak Bay Fri., Sat. & Sun., and a frost is not the best thing for mushrooms, so when we did our field searches we stayed away from the higher elevations. 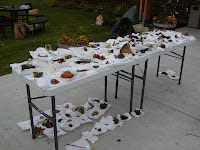 Dr. Gary A. Larsen, a research professor with the Institute of Artic Biology from Fairbanks, was our instructor. He was very knowledgeable, and it was cute how he would oooh and aaaah about various mushrooms we had collected. Basically we met at a site and then he would send us off for an hour or two to scavenge and find as many mushrooms as possible. The table above is maybe 1/5 of all the mushrooms we found the first day. The second day we went out and found many more different 'srhooms since we were in swampy areas the second day, and higher lands the first.
I brought bugspray with the expectation that walking cross-country through the woods would produce a swarm, but there were no bugs in the forest (thank goodness!). In the swampy areas we found crowberries, blueberries (shrivelled up) and lowbush cranberries. The cranberries we out-of-this-world delicious. My aunt had told me they are best after the first frost, and now I'll be able to eat them before, but will not pick lots of them until after the frost because they are sooooo good.
It was a fascinating weekend hanging out with dedicated mushroomers (there are morels in Alaska! They grow the first spring after a forest fire.), learning what distinguishes different mushrooms and how to identify them, and some edible mushrooms. I am hoping Dr. Larsen makes the 11 hour drive down from Fairbanks again next year to teach this class again!

We read your article in the Herald times. We were excited to see you!
Tell Aurora that Evey and Marissa and Courtney and Dakota all say Hi and that we miss her. If she has an e mail address, please have her send me a message and then I will have it. Mine is pswilly@yahoo.com. My family and I are living with my Grandpa and Grandma Williams for the winter.
Waiting to hear from you
Dakota Riness
Vanderbilt