In Michigan every community seems to have a winter festival, and Alaska seems no different. I didn't hear about any in December or January (probably too dark!), but now have been hearing and reading about them often. I picked up the paper and noticed Anchor Point's Snow Rondi coming up, and on a whim asked Aurora if she wanted to be in the cross-country ski race. She did, so we made plans to visit the festival on our way to Ninilchik to visit my aunt & uncle for the weekend. We are glad we did, for it was a great, fun-filled afternoon. 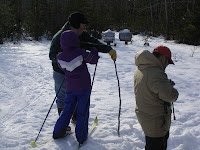 The kids both raced in the cross-country ski race and the biathalon. It was pretty casual. The race wasn't supposed to start until 1:00, but the lady said, "You're here, so you might as well race now," so the kids skied a loop to warm up, then raced the biathalon. It started with shooting a biathalon gun (no stock; looks like metal bars) to hit balloons, then racing the course, then shooting again. Points were given for hitting the target on the first shot, fewer points for getting it on the second shot. Denver took first in his age group, and Aurora got second. In the cross-country ski race both kids got first place finishes. 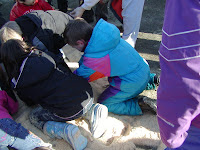 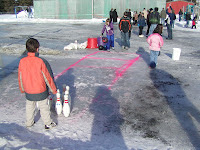 Then they headed to the local school where most events were held and played ice bowling. We watched the archery contest and snowshoe softball game while waiting for the coin hunt. This event is popular among the kids! The local VFW collects coins all year, dumps sawdust in a pile on the ground, pours some coins in it and the kids get to scrabble through it and keep what they find. There are age groups, and for each successively older group more sawdust is added, as well as more coins. Both Aurora and Denver found about $4.50, and Denver even found a Sacajeweah. It was great fun to watch, as the little kids would find coins and drop them back into the pile, not realizing their significance. The older kids were intense about finding coins, but it was still fun.

By Michigan standards, it would have been a poorly attended event, but I suspect by Alaska standards it was a great success. It is a 4-day event, has a wide variety of events (Pinewood derby contest, parade, dogsledding, snowmobile races, shooting, food every day and much more), and this year the weather was perfect. Some years there is no snow, and a lady told me the snowshoe race was converted to carrying your snowshoes and a glass of water. Whoever had the most water in the cup when they crossed the finish line won. Other years the temperature is way below zero. This year it was sunshiny and in the 20's, so we couldn't have asked for better weather. There were plenty of people there, but it didn't seem crowded.

The kids are already asking if we'll be going back next year. Guess they want more trophies and candy bars for winning races!! And even though we've only lived in Alaska 7 months, I ran into many people I knew, so it ended up being quite a social event for me. Overall it is a fun event worth going to.