I have been meaning to give garden updates before this, but haven't been around to snap a picture & blog--or else have been too embarrassed by how pathetic the garden has looked.

One month ago, at the end of June, I didn't know if I would get anything out of this garden. My cabbages, broccoli and cauliflower (C-B-C) were dying left and right, you could hardly see most of my kohlrabi plants, and my spinach and lettuce had sprouted but weren't growing. While it has been a very cool summer (some say the coldest since 1952), the garden is finally looking respectable.

My C-B-C died and I replanted 3 times. I ran out of my own plants so ended up going to the greenhouse and buying some. I'd been so careful to label each brand and type of plant, but after all those replantings, I was just throwing things in wherever there was a space. I have 70 C-B-C plants now, on last count, though I will just have to wait and see how many of each I get!

My spinach, seen in the raised bed in the foreground, is pathetic looking still. I put compost in the bottom, but then put regular dirt on top of it and didn't mix it up. That is how everything in the garden would be doing if I hadn't added 6 inches of compost/manure to the top last year. The romaine lettuce in the bed on the other end has finally begun to grow, after repeated fertilizing and lots of rain. We now have as much lettuce as we want to eat from that, and it is delicious!

In my coldframes, my zucchini is doing very similar to the spinach: small, pathetic plants (the soil is the same: hard clay when dry; muck when wet). However small the plants, they are loaded with blossoms and I noticed my first 2 inch zucchini on a couple days ago. Since it has been so cold I've left the wooden ends on all this time. My daughter asked me a few days ago how the blossoms were going to be pollinated. Good question! Now the boards on the ends are off and I'm hoping the bees come to visit!

All my plants (carrots-peas-onions-potatoes) are now pretty much on schedule and looking vital and healthy. I doused the bases of the C-B-C and kohlrabi in fish gurry yesterday to ward off fly larvae. It has rained for a couple weeks and now it is sunshining so that's the best recipe for success I think. Nothing much seems to produce till August anyways, and then we'll have to eat fresh stuff like mad!

I turned my compost for the first time this summer (I know, you're supposed to turn it regularly to give it air, etc. etc.) and it was HOT! Some shredded paper I put in there within the past week was browned--as in slightly burned! So despite not turning, it will still turn into compost! I have put in rotten barley, horse/cow manure, grass clippings, straw, household vegetable scraps, shredded paper and salmon leftovers/eggs (raw-after filleting). As you can see from the picture, I have a second compost bin started (as of today!). My other one keeps getting filled up, and I am discovering areas of the garden that are going to need significant infusion of "good stuff" for plants to do well next year!

The horsetail isn't too obvious in this picture, but it is an annoyance. It is solid between my rows of C-B-C, though I have pulled it when it is near the base of the plants. The other side of my garden, that is not in hills, is staying relatively weed free after 2 or 3 intensive weeding sessions. Someone told me to use a hoe to chop up the horsetail, time and again, and it will stop coming back, but my vegetable plants are so large now I'm afraid I'll damage them while doing so. And plenty of other gardeners have told me to give up on the horsetail, so I don't worry about it too much (after all, I'm sitting here blogging about it rather than out there weeding!!)

My basil is going gangbusters in my house, and my window sills are covered with them. I have 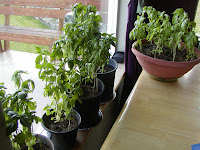 one plant each in the little 3x3x3 planters (2 flats full, plus 5 big pots with 5 plants each), and amazingly, they are still growing and producing! For awhile I kept them too moist and they started getting the wilts, but now I let them get quite dry before I water them. This has been my greatest gardening joy of the year (fresh pesto--yum yum!), and next year I'm going to grow more greenhouse plants in the house. I want fresh veggies--and the plants love our sunny window.

If I had to do this over again,
But this is all live and learn, and part of the fun. I keep saying it's all a grand experiment, and people keep telling me it's not an easy thing to grow a garden in Alaska. We don't have too much invested in it, so I keep convincing myself there's no great loss (besides my disappointment) if we don't get anything much. That was my attitude gardening in Michigan too, and there we had bounty beyond all words, with the joy of filling up cupboards and freezer, giving away to everyone we knew and selling at a farmers market to boot. If I ever move back to the Midwest and garden, I think I'll be in awe at how easy it is to grow things!!