Back in May I happened upon Bishop's Beach at a -5.5 tide, and said I was going to put the August low tides on my calendar (we were out of town for the June and July minus tides). Our entire weekend revolved around low tide activities, as we had a -4.1 for clamming in Ninilchik Friday, a -4.4 for tidepool exploring Saturday and a -3.4 Sunday for a 7 mile beach hike from Diamond Creek to Bishop's Beach. 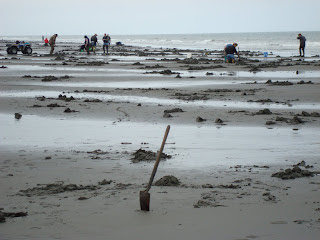 Clamming is great fun, and a way to get very dirty! A party of 7 of us (4 shovels) dug 2 1/2 three gallon buckets of them in one hour. Denver and Aurora each got a few clams all by themselves (dig and grab), but mostly I dug and the kids grabbed. My goal for the day was to not break so many (they're a lot harder to clean), and my first 5 or 6 I broke when I grabbed them, but then I refined my digging and grabbing techniques and pulled out my clams unscathed. Most were 6-10 inches long, and the 3-5 inch ones we put back in the holes. Our regular Alaska fishing license covers clamming, and we're allowed 60 per day. Clam Gulch, once known for their clams, has been overharvested and you can't find more than 3-4 inch clams there anymore from what I hear. 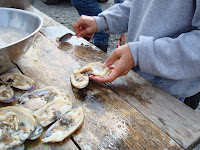 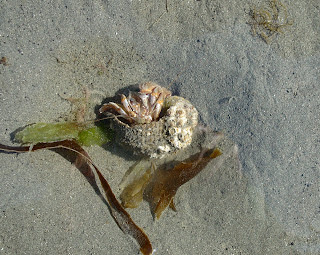 t is the cleaning afterwards that is not fun! It took me three hours to clean my one bucket of clams, with Denver cutting off the necks and cutting them open, and Aurora helping gut them for awhile. All the while we dreamed of clam chowder to keep us going through the tedious process.

Tidepool searching the kelp beds during a very low tide on Bishop's Beach is like a treasure hunt. We saw a small jellyfish, shrimp, a couple live crabs in shells, many dead crabs not in shells, anemones, sea cucumbers, clam breathers, starfish of many sizes and jellies, among many other things that we didn't know the names of. The kids found it as cool as I did. The tide only gets low enough to expose those areas a handful of times a year, and from here on out I will adjust my schedule to try to be in Homer to visit the beaches during those low, low tides.

The highlights of the tidepool exploring:
We have been wanting to hike from Diamond Creek to Bishop's Beach for a year now, ever since we found out we could. We used a low tide as an excuse to schedule it in so that we would have firm sand to walk on (hopefully; we weren't sure what the beach would be like!). Although it was only a -3.4, a whole foot less than the previous day, we ended up seeing a great number a very cool tidepool creatures and plants. 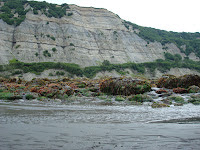 Most of the hike was bordered by cliffs like these. It was easy walking on firm sand most of the way, especially for the kids and I with our muck boots. Doug has held off getting muck boots, and by trail's end his hiking boots were soaked.

The Sterling Highway gets as close as 40 feet from the edge of this cliff, and with global warming and higher sea levels, this cliff is being washed away. I have heard that in 25 years or so sections of the Sterling Highway will be washed into the ocean if current trends continue. That could definitely change the dynamics of getting to Homer! 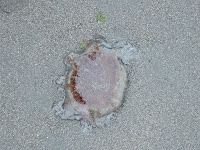 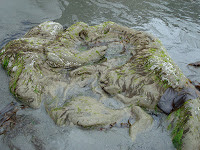 Slime molds were the highlight of this hike, as seen in the picture to the left. We've seen 2 or 3 slime molds in all our beach walks in a year, and today we saw at least a dozen. They are fascinating in the patterns and colors displayed. This one has obviously been out of the water for awhile as the edges are rough rather than smooth and regular. The rock pictured to the right was amazing. It looked more like driftwood or I don't know what--but not a rock!

The only blip in our hike was at about mile 5 when I got stuck in some mud. We'd been going along on firm sand and pebbly rocks, but decided to cut across a little cove. I was following Aurora, who got sucked in a little, but when I followed my boots got completely mired and I had to take them off in order to pull them out. Meanwhile, the mud had overflowed into one boot, so I had a mucky mess. I decided to take both of them off and walked out of there barefoot. It was warm enough and all firm sand from there on out, so I just walked barefoot for another mile or so until my feet started getting rubbed raw.

A dead sting ray was the most fascinating and unexpected find of the day.

Once again Denver had picked up shells to take home, and this time the crab didn't start coming out till we were in the car! Oh no! Denver panicked, and it was hilarious watching his expression as he held a shell with a crab crawling out of it! If he dropped it, it would fall in his lap, and he certainly didn't want that!! I relieved him of it, and he carefully checked all his other shells for hidden invaders! Who would have guessed what fun low tides could bring??!!

Sounds like such a wonderful time. I can't wait until both of my boys are old enough to have fun doing these kinds of things.

We love having our kids old enough to do these things too! Seems like we've waited a long time for them to be old enough to share all the things we want to do!

These will be lifetime memories! I can picture my stepson having the same delight!