We spent Labor Day weekend in Seward and were blessed with 2 whole days of sunshine. When it started raining on Sunday we decided to head home since we'd visited everyplace we wanted to go. We had 4 highlights of the weekend:

Climbing Mt. Marathon: The view of Resurrection Bay above was taken from the flank of Mt. 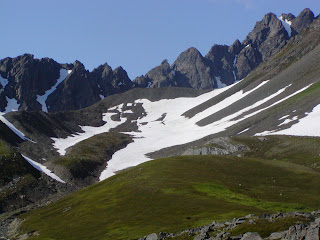 Marathon. This is a 3,022 foot mountain towering directly over the town of Seward. It is best known for the annual 4th of July race up it and back down. I've heard and read so much about it that climbing it (not running it like the racers do) was my main reason for wanting to go to Seward. One of my cousins won the race 2 years in a row. It is a 3 mile round trip race, and the runners wear gloves since there is a cliff in one section. When we went to the visitor's center to find out where it was (There was not a lot of signage), the lady said we could take the "runner's trail" as it is called, but the jeep trail was easier and went up to some falls.

We decided to take the jeep trail after much debate, and we're glad we did since we all ended up being sore the next day going a little over halfway up the mountain to the falls and the bowl that you see pictured here. Guess we haven't been doing enough mountain climbing lately!! It was a pretty trail, not too steep in most places. The pushki was awful, hanging over the trail, but Doug and the kids had pants on so they were fine. It was actually a warm day, which thoroughly surprised us, and so by the time we reached the bowl we were soaked with sweat and happy for the break. We sat and enjoyed the peacefulness for half an hour before heading back down. It took us 1 1/2 hours up, and 1 back down, including stops for berry picking. 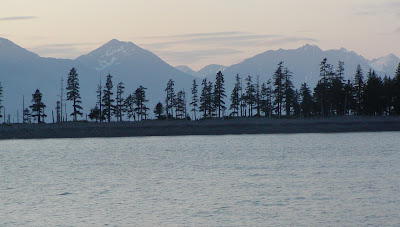 Resurrection Bay Cruise: Another reason we headed to Seward for the weekend was the Boy Scout cruise on Resurrection Bay. The tickets were rock bottom priced (a few hundred dollars off regular prices), though we did have to spend 4 hours on a boat with over 100 kids on it!
The Kenai Fjords Boat Tour was hardly in the same league as the Stan Stevens boat tour we took out of Valdez. Though they go and see the same things (sea life, glaciers, mountains), the boat we were on in Seward was old, wasn't as comfortable, wasn't designed as nicely, and the captain didn't talk 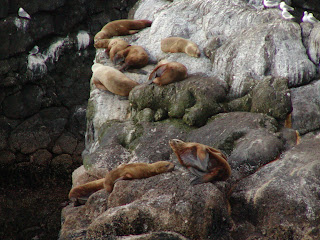 about the sights much, and the food wasn't as good, so we were a little disappointed. The highlights of the 4 hour tour were getting off at Fox Island for all-you-can-eat salmon buffet (good, but not great), seeing sea lions flopped all over the rocks, and the Dall's porpoises that swam with our boat for at least 10-15 minutes. The other neat thing was when we rounded one of the islands the open ocean swells from the Gulf of Alaska hit the boat. The kids thought that was the neatest, because they've always rode in protected bays or inlets and didn't realize the open ocean was different.

Exit Glacier: Five years ago when we visited Alaska we went to Exit Glacier. It is one of the more accessible glaciers in Alaska, and probably the most visited. It was about a mile hike up to the glacier (and getting further every year!) on a nice gravel trail. The highlight was seeing a black bear crossing the glacier. We stopped at a viewpoint with telescopes and Doug looked through it and was surprised to see a bear! It would disappear and reappear as it went in and out of crevasses. We've seen so many glaciers that we weren't awed by it (plus is was rainy and windy), but it is still amazing to realize how much ice is there, and how long it has been there! 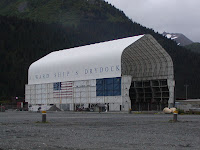 Ward's Ship's Drydock: I had heard that people from all over Alaska take their ships down to Seward to be worked on. When we were on the cruise we saw a huge white structure across the bay from Seward, and wondered what it was. On our way out of town on Sunday we found the road to get there and drove through the boatyard. It was interesting seeing so many boats dry docked, and this white structure is huge!


That was pretty much our weekend in Seward. We camped at a city campground that had a tennis court at it, which was a treat, though we didn't use it much. We shopped in downtown, and it took us an hour to get through all the shops, which is about how long we last shopping anyways. We checked out the SmokeHouse, a restaurant in a railroad car which a number of people had recommended to us. We had to wait a long time for our food (they have 8 tables, and do one order at a time), and what we ordered was good. And on the way home we stopped along the road and found a highbush blueberry/serviceberry (just like blueberries) patch and managed to pick a gallon in a little over an hour, which was a sweet ending to our weekend!

Sounds like a great time. Did you find your camera, the pictures are great.

Nope, the camera has not been found. We're reverting to our big, old clunky camera again. ):