Friday our neighbors called and said they were butchering their cows, and did we want to come and watch or help? I was actually pretty excited to see the process, so Saturday was set aside to discover what it is like to butcher a cow...to see firsthand how food goes from a living animal to a steak on our plate.

Note: These are not the typical beautiful Alaskan pictures I post on my blog. However, if this blog is about "Life in Alaska", I don't feel quite right editing out the "rougher" or "baser" parts of life up here. People everywhere butcher cows (and goats, pigs, chickens, etc.), but for our family, it is not something we encountered or experienced in our lives up until now, so that makes it part of our "Alaskan" experience. My 10-year-old daughter used 2 words to describe this process: "interesting" and "boring". I agree. I hope you enjoy, or at the very least appreciate, this photojournal of the process. 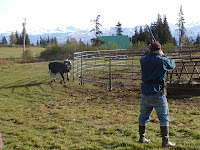 Our neighbors are hunters, so it was a simple thing to choose the gun and bring it down to the cow pasture. Compared to being mauled and eaten by a wild animal, being shot is an easy way to go. The cows didn't know they were about to be killed, and even after a couple had been killed, skinned and gutted, the others just stood around watching. The was no sense of agitation at all. This is part of what surprised me about this process. Even chickens (which I have butchered myself) get more upset than these cows did. 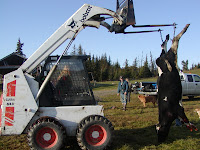 l needs to happen fairly quickly, so the moment the cow is down (one shot between the eyes), someone cuts the artery below the heart. It takes a few minutes for the reflexes to stop so that the cow stops kicking. I've seen this same reflex at work on moose that have been hit by a car. Once the cow has been bled, it is hung. In this case, our neighbors have a Cat with a forklift, which is very convenient. If this were a moose out in the woods the process would be a lot messier. The cow is brought to a good spot and laid on its back, propped up between a couple of logs to keep it steady.

Skinning the cow was th 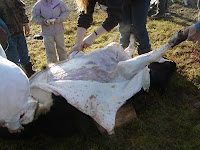 e part I was dreading the most, I think, but I was amazed at how clean it was. The only blood is what might have gotten on the cow when it was bled. Other than that, it seems the blood is contained and so it is not a gory process at all. Really, sterile is the word that comes to mind. The skinning is routine work, and fairly simple. There were 4 of us "newbies" there to observe and help how we could, and we all felt pretty competent by time we were done. After the legs are skinned they are sawed off mid-leg, and after the belly has been sliced open, the sternum is sawed as well. 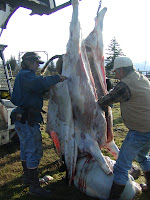 cess, from shot to the end when the cow is quartered and hung took less than an hour. Normally it takes them less time when they don't have inexperienced people helping. They take their cows to a processor so that they get good cuts, sausage, stew meat, etc. made up. Apparently the meat can hang for 10 days in cool weather before it begins to go bad. The heart is the only internal organ that they keep, and they give the tongues to someone who enjoys cooking them up. 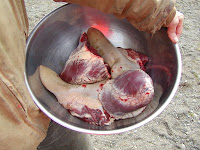 For people who have been raised in hunting families or on farms, this is probably all old hat. I was not, so this was a new experience for me. I don't think I would go and start raising myself a cow and butchering it myself, but the whole concept of growing your own food--meat--is not quite so foreign to me anymore.

The carbon footprint for these cows is very low. They are raised on the farm over winter, fed grass, butchered here and driven a few miles down the road to the processor. Part of the problem with typical meat bought in the stores today is that it takes an immense amount of energy to grow, butcher, process and ship to stores all over the country or world. The carbon footprint is large, and much of the nutritional value of the meat is lost due to being corn-fed animals. It is neat to see how it "should" be done, or at least seeing that some people still have the skill, equipment and know-how to actually feed themselves.

So, do you get to try this cow? We get a 1/4 (more than enough for our small family) a year from a local farmer and the meat is so much better than store bought.

We would always hang our deer for a a week. I was never sure why, but I think it improves flavor and tenderizes.