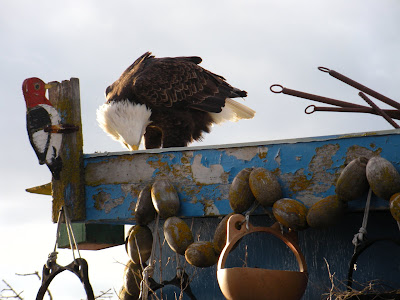 Over the past year and a half of living in Homer I have heard the name "The Eagle Lady" bandied about. I didn't know who she was, what she did, where she lived, or anything else about her. Two weeks ago a friend and I were out skiing and she mentioned the Eagle Lady, and two days later, Jean Keene, the "Eagle Lady", had died. It is only now, having read about her life in the local papers (see http://homertribune.com/ for a wonderful account of her life), that I begin to understand what an impact this lady has had on Homer. 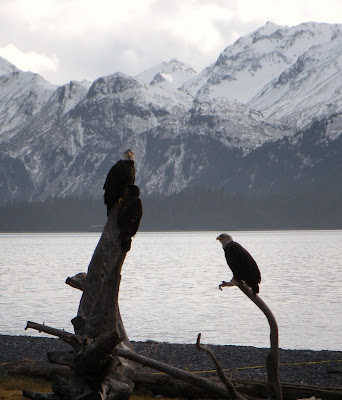 This afternoon at a ceremonial eagle feeding in memory of the Eagle Lady I had tears in my eyes and my heart was heavy even though I hadn't known Jean. I don't agree with feeding wild animals, still don't understand why Jean was allowed to when no one else is, and yet I couldn't help but feel the significance of t 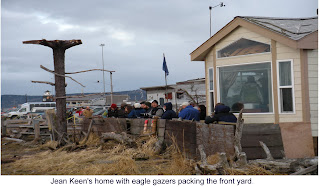 he moment and I appreciated this gesture--a ceremonial feeding--for people to come and see what Jean did, and in a way, to say good-bye to her. Part of my tears and heavy heart were for my husband's grandma who died this week and whose funeral was just this morning. My thoughts turned to legacies that some people leave behind. Jean did, as the Eagle Lady, just as my husband's grandma did, with her indomitable, fiery Irish Catholic spirit. The papers say that Jean Keene put Homer on the map, that people would come visit Homer just to see the eagles, that she helped the local economy by drawing people here time and again. She also forged relationships, connecting with people all over the globe. I can't shake the feeling that there was something special going on here, as much as I intellectually resist the implications of feeding wild animals.

The eagle feeding has attracted hundreds of people to Homer over the years (thousands, perhaps?), many of them photographers. Today the photographers were lined up, tripods, microphones....all the fancy doo-dads. It was almost as interesting watching them as the birds. You could tell some people were there for the birds, some people were there for Jean, and others just hoping for a good shot with their camera. I took Denver out of curiosity: I wanted to know what all the fuss was about. Was this really as neat as people said it was? 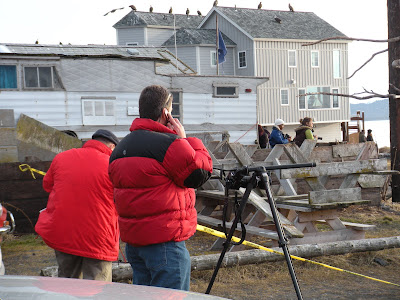 Reports say 300-500 eagles show up for this event, and as 3:00 neared, I looked around and every lampost, every building top, every perch within sight of the Eagle Lady's trailer at the end of the Spit had an eagle or two, or six perched on it. There were, literally, hundreds of eagles perching, swooping, flying, scrawing. Usually people are not allowed to get out of their cars during the feeding, but for this one time they made an exception and allowed everyone up to a cordoned off area of the beach. 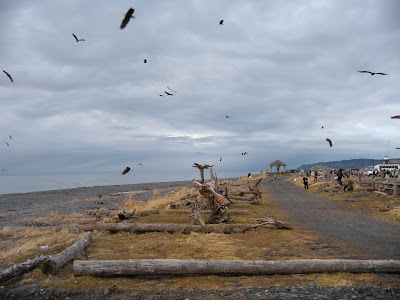 Ten minutes after they started throwing the frozen herring to the eagles, many people began to wander away. Jean threw fish to the eagles here on the Homer Spit nearly every day of the past 30 years. That is a dedication and tenacity that I deeply admire and respect. And despite the phalanx of photographers and those vying for a position of honor in Jean's fenced-in yard, I found it to be a special moment--a moment of reflection on people and nature, life and death, brevity and legacy. I was glad to be there to share this moment. 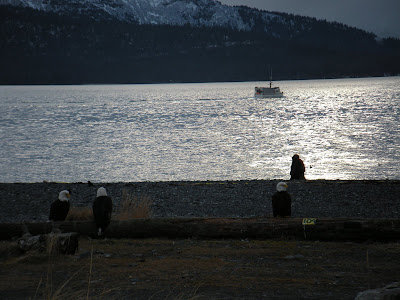