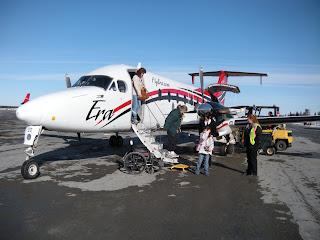 I have known that flying is a vital mode of transportation in Alaska, but when the college I work for sent me to a conference in Fairbanks this week I got to experience firsthand what I call the "puddle jumpers"--small planes that are vital links to all the small communities in Alaska.

Fairbanks is not even halfway across the state from where I live in Homer, but it would be a 12 hour drive in perfect conditions. Even people who attended this conference from Anchorage flew, and they had half that distance to travel.

Some things struck me as I made the flights from Homer to Anchorage to Fairbanks and then back to Anchorage and on to Kenai (I had a meeting there the day after the conference ended, and my daughter had a forensics tournament in town, so that worked out perfectly!):
One interesting event occurred as I was leaving Fairbanks yesterday. They made an announcement that our flight would be a little late. Meanwhile, a private plane landed just outside the door, about 10 men somberly filed in, were in the terminal for about 5-10 minutes, and then they all filed out, boarded the plane and it took off. I suspect they were oil field workers, though I got the sense of prisoners they way they walked. They were all big men, they appeared tired or at least very serious, and it looked like they had done this before.

A fast turnaround surprised me in Fairbanks. When our flight finally came in the passengers disembarked, we loaded, and the plane was back in the air in less than 20 minutes! I picture the puddle jumper pilot job as something like a bus driver or taxi!

And to top off the strangeness of the above incident, the man who sat next to me on the plane from Fairbanks to Anchorage calmly opened a thermodynamics textbook (upsidedown!) and proceeded to take notes (upsidedown)! He read the book upsidedown the entire hour long flight! Hm. It makes me think maybe I'm just too normal!!

I do believe you must have been hallucinating! Either that or I'm thinking someone needs to start questioning the company you keep.

How on earth did you keep a straight face? Did you ask him why he was reading and writing upside down? I'd have wanted to grab my camera and video tape that. It is just too weird.

Yep, the problem must be you are too normal - of course that makes most of the rest of the civilized world a little too normal as well.

Well, I was tempted to ask him, but he seemed to want no contact, and I didn't want to act like anything was out of the normal--since he didn't. I know--I keep shaking me head at that one. I really should have asked!!