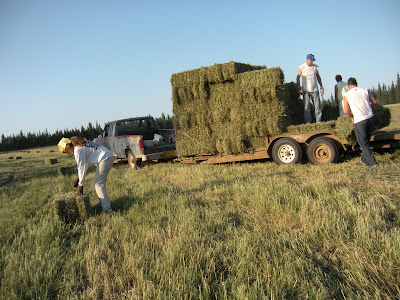 Since we've moved to Alaska, it has become a much-anticipated tradition to help my aunt and uncle with the haying each summer. They are in their late 60's and early 70's so don't throw haybales so well anymore, so they really appreciate our strong, young backs!

Haying happens once per summer on the Kenai Peninsula. It can range from the first week in July during a really hot year to well into August if the weather doesn't cooperate. This year the weather did not cooperate, so it resulted in weeks of anticipation that we were ready to drop whatever was going on to run to Ninilchik and help get the hay in. Although the weather in Homer is not always the same as 40 minutes up the road in Ninilchik, I noticed it was sunny Thursday and Friday and that they were haying in Homer, so I mentally counted the days: Cut on Friday, dry on Saturday and Sunday, bale on Monday. Sure enough, my uncle called Monday morning. As soon as I heard his voice I said, "We're ready to come down as soon as you need us! We're ready to hay!" The dew was heavy, and he didn't anticipate it drying off enough till late afternoon, so we got our bags packed for a quick take-off.

At 6:15 we finally got the call: we're haying! They'd gotten one load in by time we got there with a couple of young guys from California who were visiting as well as Kelli and Todd, their d 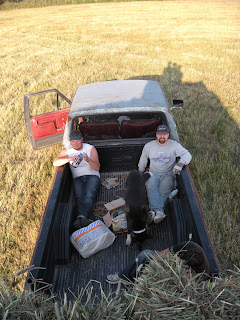 aughter and son-in-law. Two more loads and a couple hours later, 500 bales were in the barn. It was a relief to get some dinner (finally!), wash the sweat and grime off and rest our weary muscles. Heaving dozens of 40-60 lb. bales of hay around for hours is one workout that gets my heart rate up. In fact, one of my friends told me today that a guy near Ninilchik dropped dead of a heart attack in the middle of a field while haying yesterday. The more people on your team throwing bales the less stress on each person, and it can be more fun depending on who the group is.

The kids find haying a blast. Since they're both not quite strong enough to throw the bales up on the wagon they each got a turn driving the truck this, an essential role, but one that allows the more physically able to heave bales. Aurora did help unload the wagon in the barn since gravity helped do a lot of the work. They ride the top of the hay wagon, ride the bales as they come out of the baler, run around the field, swing from ropes high up in the hay barn and otherwise stay happily occupied.

This year, though it was a late crop, was average for this field. They got 905 bales off it. Last year they got a measly 710 bales, wh 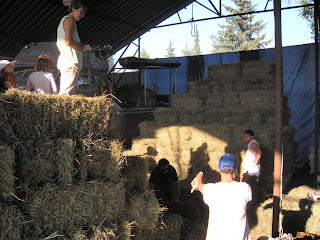 ile 6 years ago was a whopper year with nearly 2000 bales from this field. So there was satisfaction that the horses would be fed for another winter, as well as relief that it was finally done and they could go on vacation. Until the hay is in, life is somewhat on hold, waiting to see what weather comes and if the window is large enough to get it all in.

People all over the world hay, but for us this has become part of our Alaska experience: something we never did in the Lower 48. As grueling as it can be, there is a sense of comraderie and fun. And like I mentioned when we were out there the other day: It's always sunny when you're haying!

It sounds like you all have a good life there,yeah haying is very hard work..someday I hope to visit Alaska..I really look forward to your posts..

Yes, it is a good life up here. Glad you enjoy the pictures and blog!