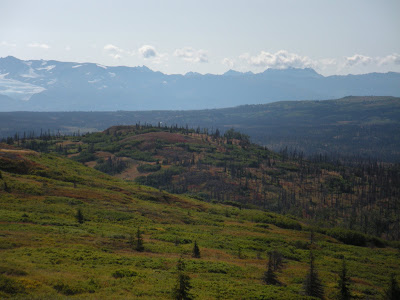 Just as we talk about apple 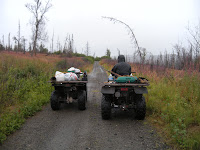 pie being American, when one talks about what Alaskans do, moose hunting tops the list. Thus, when my uncle offered to take us moose hunting the other week, although I was up to my eyeballs in work, I jumped at the chance and rearranged my schedule to make it happen.

I was hoping for a gloriously sunny weekend--the type that just fills you up and makes the joy of being outdoors just well up and overflow. That was not to be. As we loaded up the 4-wheelers it began to drizzle and the evening got darker and more depressing. Although the weather was a downer, we were in good spirits, eager to see what the hunt would bring. Part of the challenge of loading was deciding where to put and how to carry all the guns. We had 2 pistols for bear protection and 3 rifles to maximize our chance of getting a moose (or encountering a bear and protecting the moose meat).

The first hour of 4-wheeling got us 8 miles down the trail. While it started out as this nice graveled road you see it pictured, it eventually deteriorated into a mucky, bumpy (!!) track. The final mile to our camp we got stuck 4 times. That is, my uncle in the lead got stuck 4 times. It took us 45 minutes to go the final mile. It was a relief to get there and get out of the rain, peel off the wet stuff and unpack our stuff. First we had to un-booby trap the cabin we were staying it. The outhouse was boarded up, barbed wired wrapped around the cabin, windows boarded up and sheet of nails in front of the door removed. You would think we were in New York City for all the protection, but bears wreak havoc on cabins. On this cabin a bear once ripped the boards off the windows to get inside to the food; thus the barbed wire addition.

Next morning dawned wet. Douglas and my uncle John were up at 5:30 and out the door by 6:00. They hiked up the trail a ways to a spot John knew the moose hung out. That morning they saw a few moose, but no legal ones. Legal has changed. In the past, any bull moose was fair game to kill, but now the 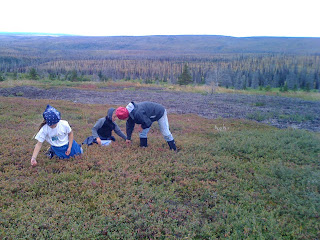 bulls have to either have antlers smaller than a certain size, or over 50 inches. As anyone who has hunted knows, it is pretty hard to tell rack size when it's raining, just getting light, and the moose is a ways from you. It makes this game a lot harder since you have to get closer and be at the right angle to see the antlers. My uncle, a 40+ year veteran of Alaskan moose hunts, says it's not as fun this way, but that something needed to be done because there simply are not as many moose as there used to be, no matter what the officials say.

By 9:30 the guys were back to camp. The moose head upland at night and down to the lowlands in the morning and then hunker down all day. You could put in time during the day looking for tracks and signs of them, but it wouldn't be efficiently used time. So the guys ate breakfast and went back to bed, while the kids, my aunt Delores and I headed out berrypicking. The area we were in was ravanged by fire a few years ago, and last year there were no berry plants or berries, so we were tentatively hopeful. The area was splotchy, with some areas so burned there was no vegetation, and then we discovered a grand bed of blueberries. We picked for 2 hours, but with the wet bushes and wind our fingers were frigid so we finally gave it up.

The day was spent making food, taking naps, playing games, reading and talking. A little before 7:00 that evening Doug, John, Aurora and I headed out for the evening hunt. We were watching the lowlands, looking for moose heading up. We found a moose wallow, a bare patch of ground where a moose had rubbed the ground clear to the dirt, and set up watch nearby. At 9:15, after 2 hours of not seeing a single moose, we headed back to camp.

Next day dawned wet again. This time the guys came back at 9:30 in high spirits, talking and laughing about the moose they'd seen. A moose with a 30-ish inch rack had stood in the trail just 20 yards away from Doug--a perfect shot--but wasn't legal size so he had to pass it up. They saw 9 moose between them that morning; some they couldn't tell if they were legal while others were clearly cows.

Once again we headed up the hills to go berry picking, this time going right to the rich patch loaded with big, ripe blueberries we'd left behind yesterday. It wasn't raining, but the plants were wet and there was a strong wind blowing. The clouds were so low they obscured the top of the hills above us at times, and as we were heading out of the patch that day they got so low we couldn't see much around us. It was a good time to get back to the 4-wheelers and find the trail.

That evening we all took the 4-wheelers down the trail a ways at 5:00, hoping to get set up and catch the moose as they came up. The weather had cleared and it was now gloriously sunny and we had an incredible view of the the Alaska Range on one side, with Mt. Redoubt's small plume poofing up into the sky, and the Kenai Range on the other, with its snow-capped peaks. We split up into 2 groups, checking out different areas for trails and tracks and finally settling down by a water hole that had a well-worn animal track along it. Again, we saw no moose and the berries weren't plentiful in that area so it was a time of conversation and quietness.

The final morning the guys took the 4-wheelers out to get to their spot earlier. They saw 9 moose again, but they were on the move and too far away to tell size. It was too close to 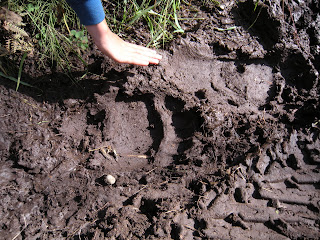 dawn, the the animals needed to be hunkered down somewhere before the sun rose. When the guys got back to camp we started packing up, cleaning out, re-booby trapping the cabin, a process that took several hours. Less than a half mile from camp, as we were 4-wheeling down the section of trail we'd gotten stuck in coming up, we saw this delightfully beautiful bear print. Aurora got back on the 4-wheeler and grabbed me tighter than she's grabbed me in a long time. We knew it was a fresh track because we'd just met some 4-wheelers coming in minutes before. Wow!

Reflections:
I wanted so badly to get a moose so that we could experience the whole process of moose hunting. My aunt and uncle actually process the moose themselves, cutting it up into steaks, grinding it into burger, etc. Moose hunting without a moose to take back was very disappointing, and even now, 2 weeks later, I am so disappointed I want to cry when I think about it.

What I loved about moose hunting was being out there. I can't say we were in the woods, because most of the trees were burned, and then much was above treeline anyways. Shall I say, "out in the wilderness?" It doesn't seem so wild now that I've been there. When we first got there on Thursday evening, I said to myself, "What's so special about this place?" But the beauty is like much of Alaska: a cold, ethereal hugeness that is hard to take in. It's so big, and so, so beautiful. And the beauty got inside me like a sliver and now I find myself wanting to go back. Moose or no moose, I want to tramp those hills and explore, pick berries, gaze at the mountains and hills, and reach and touch the sky. Yes, I gaze at the mountains and Kachemak Bay every day from my window, but there is something special about being out there in it, feeling the rhythms of the land and animals. Being there for the hunt made me look at the land differently--needing to be in tune with it rather than oblivious to it. I am so glad I carved the time out of my schedule to be there and experience this. It was a special time. 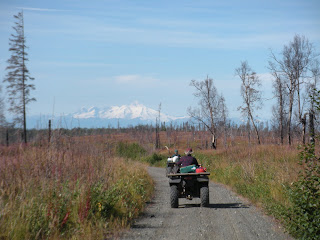 The end--an unusually warm day marked our departure, so our ride out was
much more comfortable than our ride in!