The Homer Invitational: First High School Race of the Year 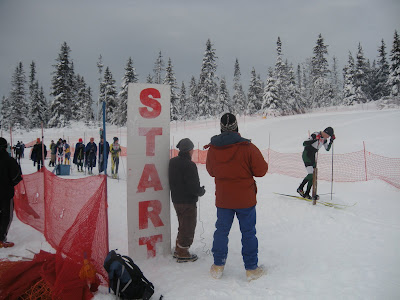 Part of the advantage of being on the Kachemak Women's Nordic Ski Team is that I get email notices about all the local ski events, including a call for volunteers. When one of the volunteers got called to work on the Slope at the last minute, I felt bad for the volunteer coordinator and offered to be a timer at the Homer Invitational High School ski race at Lookout Mountain last Friday. My relatives were coming from Kenai to race, so I figured I could spectator and help out at the same time. 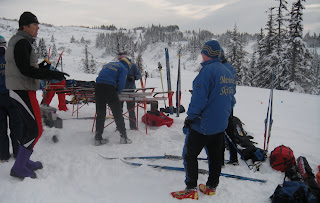 Despite having raced all through high school, this ski race did not even begin to stir any memories for me of my high school skiing days. It is a totally different ballpark. When I was in high school it was a ski club, there were maybe 10 of us on the team (2 girls), it was skating only (the years right after Bill Koch's gold medal win at the '84 Olympics using the revolutionary ski skating technique), we went to community races where the very young to the very old all raced together, and it was always a mass start. I raced against other high schoolers in a high-school only venue just once a year:  at the high school cross-country ski championships near the end of the season. 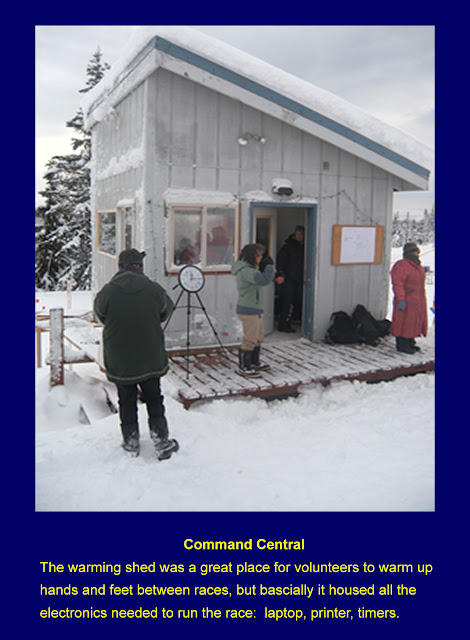 Contrast that with this race setup:
There were about 130 racers, JV and varsity, boys and girls.
Friday afternoon was a 3km classical race; Saturday was the 5km skating race. Thus, the kids got a whole day off school to go to this race, and then they all camped overnight at Homer High School.
The starts were timed, about 10-15 seconds apart, so there was no "pack", and you really didn't know how you were doing relative to everyone else until the results came in long after the race was over.  To top it off, the coaches waxed the kids' skis and there were volunteers who wrapped blankets around the skiers as they stood in line waiting to start.  Admittedly, the pressure on these young athletes is probably much greater than it was on me since so much time and money is invested in their success.

My job as a timer was to click a button each time a skier's foot crossed the finish line.  Three other people were doing the same thing, and there were 4 people punching bib numbers into their handheld computers while 2 people had a paper backups, writing down every bib number as it crossed the finish line.  All of the information from the computers was being fed into the laptop in the warming hut as we did it.  If it seems like overkill, some of the handheld computers weren't working, so it was important that at least one be working at all times.  My neice ended up losing to the next closest skier in the classical race by one-tenth of a second, which could be someone's reaction time in clicking their button.

All in all, it was fun to be part of this event and see how a ski race is run.  The grooming, plowing, signage, timers, yadda yadda, all added up to a huge number of hours to pull this off.  A really nice touch was the huge bonfire with hot drinks, soup and a place to sit for anyone who cared to stop and enjoy.  Unfortunately, I was too busy timing to get over there, but it sure looked inviting!