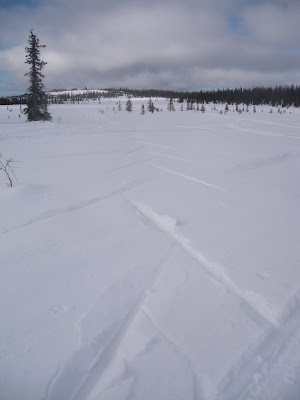 Crust skiing is a term that gets thrown about with anticipation and enthusiasm by Alaskan cross-country skiers. In Michigan I think we called it 'spring skiing,' but here it takes on whole new meaning with the large expanses of undeveloped and unforested land. When I rolled out of bed this morning and saw it was a beautiful day out, I felt some urgency to get my skis on and get out there before the sun softened the snow. Apparently I wasn't the only one with that thought! I checked my email and discovered a crust skiing/sushi party up by Lookout this afternoon, and another email from someone on the Homer Women's Nordic Team asking about crust skiing conditions.

As I pulled up to McNeil Canyon School there were 2 cars ahead of me, and one guy who was checking out the snow called over, "It couldn't get better than this!" as he cruised around an ungroomed but very skiable area. Three more cars pulled up behind me as I got my skis on. I cruised cross-country, checking out conditions, and deci 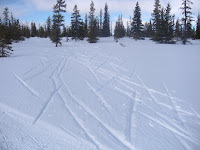 ded to explore the area over by Eveline Trails adjacent the McNeil trail system. Over there I bumped into a couple friends and one of them gave a detailed description of crust skiing conditions (just so-so), what would need to happen to make it perfect conditions, and his estimate of when those conditions will happen (1 week).

As you can see from my pictures, our skis broke through the crust, so it wasn't quite perfect crust skiing yet. Earlier in the day (it was 10:30-11 a.m. at the time) conditions would have been better, and it always helps to be lighter! With anywhere from 2-4+ feet of snow on the ground still, depending on upcoming temperatures, we could still be skiing for another month or more yet.

I've never really gotten into crust skiing before, but the attraction is clear. Ditch the little groomed circles that we call ski trails and just strike out for any distant mountain, ridge or landmark. The weather is warm, tans are the norm, people sightings are rare and the freedom is delightful. For my first time ever, I am anxiously awaiting crust skiing! I just have to watch out for bear fresh out of hibernation and crabby moose!

I haven't x-country skied in so long and miss it. Of course I only know how to traditionally x-country ski not the fancy skate skiing. I'm not sure if my terms are right or not, but hopefully you get the idea. I think the sew way of x-country skiing is now of my list of have to do. Make sure to take your camera for those bear and moose that just might cross your path. :-)

Yep, I had my camera that day....but whether I would get it out in time is always another question!! ( :

I was laughing when I wrote that thinking if it was a bear just out of hibernation I would just get my behind out of there and forget the pictures. :-)