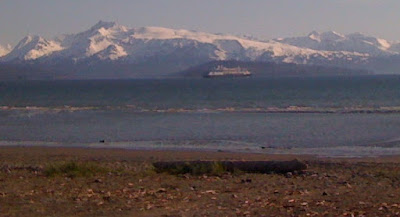 As I drove into town this afternoon, I was startled by the number of people walking around Homer on Pioneer Avenue. Five blocks later there were so many people I came to the logical conclusion: there was a cruise ship docked in town. When I returned home I could see it docked near the end of the Spit, and when we had to drop Denver off at play practice this evening we saw it up close: it was huge! However, it was also moving fast, so while it was just off the north side of the spit, by time we walked past the buildings to get a good view of it, the ship was beyond the Spit and heading out of Kachemak Bay.

Homer does not get a lot of cruise ships. A 'normal' summer seems to see two or three, and not the humongous ones. Supposedly there are supposed to be up to nine cruise ships visiting this summer. This one, the Amsterdam with Holland America Line, was by far the largest I've seen in Homer. I was impressed, as always, at the number of people these ships spew out, and also impressed at how much money these ships must bring into the area. I can see that a few more ships might mean a store staying in business or not. When we visited Juneau a few years ago these giant ships were in and out daily; those have the perfect setup as downtown Juneau is right on the boat dock. In Homer there is the 5 mile Spit and then some to get into 'town,' though I am guessing shuttles are provided.

The Homer News had a nice write-up on the cruise ships coming to the area this summer, including this one. See http://homeralaska.com/Stories/Cruise-ship-scheduled-for-nine-Homer-visits-in-2010.shtml.

June 8: The Amsterdam was back today and this time
I made sure to get a picture before it left harbor!