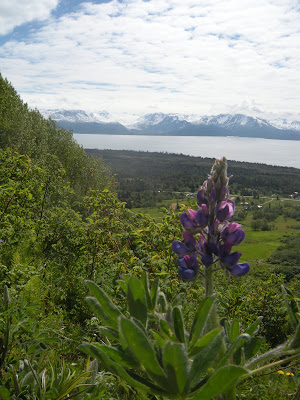 Ever since we moved to Homer 3 years ago I have wanted to climb the ridge that rises 1000 feet above the town of Homer. Also known as "the bench," we now live at the base of this ridge. I hear there are several trails up the ridge, though they start on private property so you need to know where there are and have the permission of the owners to cross their land. On one of our walks last year a neighbor told us that one trail starts on their property and they invited us to use it whenever we wanted. Aurora has bugged me to climb the ridge since we moved to our house, but the timing was never right. We were too busy in the fall, I had no desire to go up it in the winter, and then it was too mucky in the spring. Then the bears were coming out of hibernation and no one recommended going up there until they'd been out of hibernation a bit and had found food. We haven't had rain in a couple weeks and the pushki and other plants aren't too big yet so I decided today was the day.

We found the trail with no problem as our neighbors had marked it with a flag and weed-wacked the first 50 feet or so. After that first 50 feet, the trail was gone and we pretty much had to forage our own route up. If we climbed in the ravine there was more pushki and possibly boggy land. We opted to climb one of the spines of the ridge. In some places this was a nearly vertical climb. We were surrounded by pushki at the lower elevation and thorny wild rose bushes higher up. We would lose our balance at times and grab at the nearest shrub and discover we'd grabbed a handful of thorns. Ouch!

I was amazed to discover that the plants on the ridge were significantly further along than the plants in our yard. Lupine, forget-me-nots, wild geraniums and wild roses were blooming in profusion (the lupine has just come up in my yard), creating a beautiful mountain meadow feel. Even the pushki was a foot taller than just a few hundred feet lower at our place. This is probably because of the south-facing slope.

We took plenty of breaks as we planned our route up and scanned for bear or moose who might be crabby about our invading their territory. We got to the 'top' only to discover that the 'top' was a false one and we'd have a much longer hike if we wanted to get all the way up to Skyline Drive. The kids opted to enjoy the view, eat a snack and head back down.

Three years of itching to climb the ridge is thoroughly out of my system. Even the kids, who were so keen on the hike, said they don't want to do it again for awhile. One neighbor said their kids and grandkids snowboard the ridge in the winter. Aurora likes the thought, but I can't quite imagine climbing it with snow if it was that difficult climbing without snow! I'm out on the count on whether I'm going to let that happen! 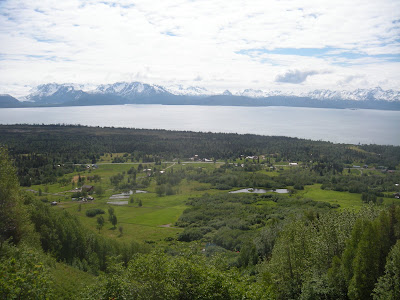 The view from on the ridge.
Grewingk Glacier is on the far left of the Kenai Mountain Range.