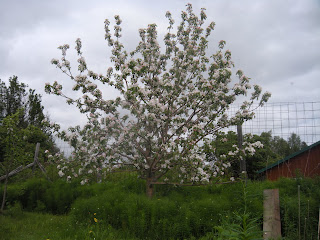 Apple trees, domestic blueberries, currants, raspberries and strawberries
are the fruit we are treated to right in our yard, nearly all protected by an 8 foot moose fence.
I spent 2 years starting a garden from scratch at 1300 feet elevation at the home we rented for 2 years. Now we live at 300 f 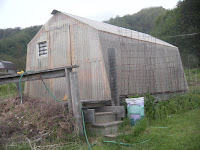 eet above sea level and the growing season is 2-4 weeks longer here and the area is protected, away from the winds the roared off the glaciers up high. While our new home had a garden before we moved in, it was grown over and neglected for years (and lawn planted over some of it) so there was lots of work required to make it plantable again.

The greenhouse was easy: the last day of April I threw some lettuce, spinach and radishes in along the back edge of the r 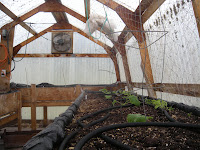 aised beds, figuring we could get the crop long before the larger plants crowded them out. Memorial weekend I ran over to Wagon Wheel (our local garden supply store) and got some tomato, cucumber, pepper and zucchini starts and planted them, arranging the soaker hoses around the plants. It is a petite greenhouse, with room for 6 plants on each side and three hills along the back in the raised beds. I supplemented with some pots and planters on the floor, which ended up not doing well.

I got the fan plugged in and set the temperature for 80 degrees so the fan would go on when the inside temperature reached 80. A vent on the other end sometimes opens, sometimes does not. On warm days when I'm around and the fan is running constantly I open the door to let bees or other pollinators in to do their work on the cucumber and zucchini blossoms. The tomato blossoms just need to be shaken to pollinate them, so they all get a daily shake. The pepper plants don't need pollinating, but the zucchini females (the ones that form the zucchinis) need to be pollinated with males (blossoms on stalks with no baby zucchini forming), which I have to do if I don't think a bee has done the job.

The garden was another story. There were 2 raised beds that were a solid mass of weeds. 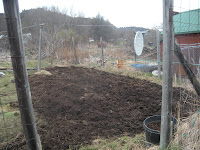 I broke a brand new shovel on it last year trying to get through it. The wood was not treated, however, and was starting to rot so I ended up just tearing that raised bed out and renting a rototiller from Uhlmers and tilling up the raised bed and the area behind it. The sod was so thick that the tiller had a hard time biting through it, and the pushki roots were virtually impossible to till. However, we managed, and I was impressed that the soil was actually pretty good (a bit wet, but good). 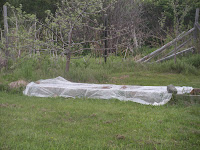 Another raised bed had been built of treated wood and was not rotting, so I dug all the iris' out of it. In half I planted rhubarb roots I'd found in the yard; in the other half I planted celery seeds and celery starts and covered it with remay to keep it a bit warmer and more protected. The celery seeds never came up, so I later planted a cucumber and a zucchini to fill the space and added some spinach seeds a few weeks ago for a late spinach crop.

I have heard that in our area zucchini and cucumbers cannot grow outside, but someone gave me their leftover starts after I had already filled up the greenhouse. 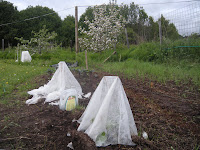 In the spirit of adventure, I decided to try planting them outside and I covered them in remay tents (pictured) and plastic juice jugs. The type of covering didn't seem to make a difference, but rain could get through the remay, while the plants under the plastic jugs stayed dry when it rained and had to be manually watered. At this point in mid/late July the zucchini are blossoming and the cucumber is still limping along.

To supplement the garden footage, I planted my herbs in tubs: parsley, chives and mint each had a t 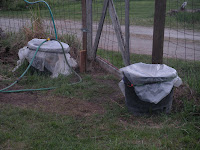 ub and were covered with either remay or plastic (more experimenting). I just used what soil was already in the tubs, which probably wasn't a good idea; I think they would have done better with less potting soil and more real dirt with nutrients. The parsley just finally showed up a few days ago, and I gave up on the chives (they were up but wouldn't be harvestable for a few years) and cut a bunch off someone else's mature plants. 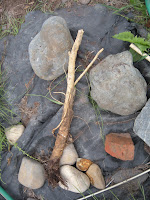 Planting was a challenge. The sod hadn't been worked up well, so there were sections that were still untilled. I was in a hurry to get everything in what with various summer travel plans pulling us away from home during the key planting season, so I did a shortcut version: for the potatoes I dug a hole through the sod/weeds just enough to plant the potato. In one entire row I pulled out pushki root after pushki root, giant tubers (pictured left) that look like humongous dandelion roots. The kicker is that the fluid from pushki can cause blisters, rashes and other skin irritation so no matter how beautiful the weather was I had to wear full protection: long pants, long shirt and thick gloves. What I didn't do and should have is wear a mask. After that day of planting potatoes and pulling up pushki roots my throat was sore for 2 days. 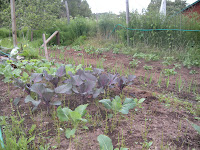 I was disappointed at how small my garden turned out. My aunt had given me her leftover starts as well as potatoes left over from last year. With that I planted 4 rows of potatoes and about 24 kohlrabi, cabbage, broccoli and cauliflower. I had just enough room for a partial row of onions, a partial row of rutabagas and a double row of carrots. I like to have my freezer full and veggies enough to last the winter, but it is a gradual process to reach that ideal. For a first year, this was a start.

So far my harvest has been 4 cucumbers from the greenhouse and lots of lettuce. My green peppers are ready whenever I need them. Neither the radishes or spinach made it either in the greenhouse or in the planters outside, which I attribute to poor soil. Amazingly, the bibb lettuce loves it inside the greenhouse. In the greenhouse the cucumber plants are less than 8 inches in length (pathetic!) and bore some cukes, but some cukes have been dying and falling off as well. The tomato plants are going wild and are huge, with tiny green tomatoes on them, and the acorn squash (planted seeds Memorial weekend) are prolific. The zucchini plants inside are about 5 times larger than the plants outside and started blossoming a few weeks sooner (4 inch fruit on them already compared to no fruit yet on the outside ones).

One sweet thing we inherited is an underground hose that runs from the house out to the greenhouse/garden area. We are careful with water as we have water trucked in (as does nearly everyone who lives on 'the bench' in Homer). We have yet to get a rainwater gathering system in place. After nearly a year of thinking about it, I finally chose my compost spot and got my lawn clippings, vegetable scraps, sawdust, comfrey leaves and more peculating to make some good dirt for me.

Next year I hope to be on top of things a bit more and start my own plants inside earlier and get everything planted in the greenhouse sooner as well. While a heater in the greenhouse would be nice, it is not absolutely necessary. I always approach my gardening in Alaska as a great big experiment anyways, so I'm always throwing things in, transplanting, using manure tea, bringing bees into the greenhouse and whatever other idea hits me. I give my gardener friends tours and pump them for information, which is my best source of expertise as gardeners love talking plants and sharing their knowledge (which is why I am blogging so extensively about this!). If a plant dies, I just plant something else to take its place since I have so little space. I have planted spinach in 3 different places at 3 different times in the past couple weeks as I rearrange things. And of course weeding is a never-ending task, but I have a great tan for my efforts!!

The key difference with gardening down here was that the soil was readily plantable. Up yonder where we used to live the 'soil' was 'clay' and impossible to plant without adding a lot of compost, manure and good stuff for drainage and nutrients. I don't know if all the soil around here is so good, but soil has been eroding off the ridge above us for hundreds or thousands of years, so I suspect it is simply better than soil at elevation. Gardening is a lot of work, but I love it!