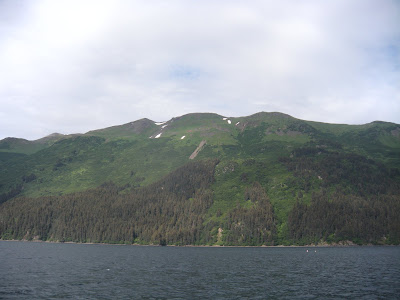 Grace Ridge, an 8.2 mile hike, climbs and then follows this ridge above Sadie Cove and Tutka Bay.

A friend emailed me the other day and asked me if I wanted to do a hike across the bay. After the usual calendar check, I was like, "Sure!" Grace Ridge was our destination, an 8.2 mile point-to-point hike off of Tutka Bay. 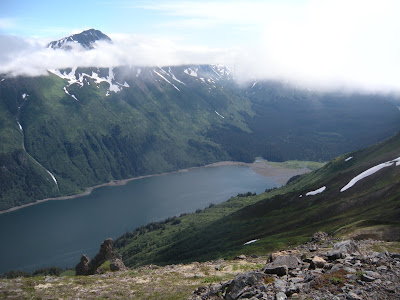 Sadie Cove, as seen from Grace Ridge.
A couple from Miami, Florida and a local guide were also doing the hike that day so we all got in the water taxi for True North Kayak Adventures, swapping stories on the 30-40 minute ride over to Tutka Bay. We were dropped on a gravel beach, one of many that dot the shores of Kachemak Bay. The bright orange triangular T sign marked the trailhead. We started climbing. Three hours and 3150 feet later we reached the top. 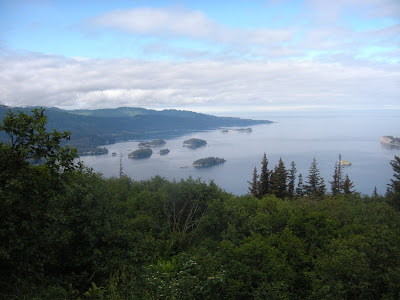 Tutka Bay
The trail was a nice singletrack, not too muddy, with blueberries lining the lower reaches of the trail and fresh berry-filled bear scat punctuating our walk at regular intervals. It was a 1700 foot climb to reach the alpine where snow patches, marmots, and alpine blueberry plants abounded. As we climbed to the ridge clouds enveloped the peak so we were afraid we weren't going to get a good view. Eventually the clouds blew over so we were able to see Sadie Cove to our left and Tutka Bay to our right, thousands of feet below us.

The ridge went on and on, 3.6 miles to be exact, climbing peaks then descending saddles between them. At some points the rid 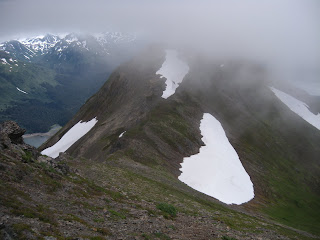 ge was a razor edge with steep dropoffs on each side of us. Mostly it was a pretty easy walk, though, and the views were stupendous. Once the clouds even thinned enough to see Mt. Illiamna in the distance. We were surprised at how much volcanic ash was still sitting in piles all over the ridge, thinking at first it was a fine mud but then realizing what it was.

As we got to the end of the ridge and headed down, the salmonberry plants, skunk cabbage and pushki hung over the trail, making it difficult to see where we were going. The sun came out in full force and roasted us, but we wore long pants anyways as pushki protection.

We managed to hike the 8.2 miles in 6 1/2 hours (the hike estimate is 6-8 hours). On the uphill and downhills we kept up a steady pace, while we dillydallied along the ridge, stopping to eat twice, take pictures, and talk, which only gave us a little bit of time to spare for our boat pickup at 5:00.

On the way back our boat captain got a call and he made a detour over to one of the gravel beaches. As he pulled up we saw a dog whose collar had gotten caught to a bouy. He was stuck, and it was too far out for the woman to swim to, well over her head and with large waves breaking. Two toddlers were watching as we unhooked the dog from the bouy, hauled him on board and took him to shore. He was petrified and didn't want to jump down so we had to push him off where his owned thanked us profusely. Apparently she'd called one of the water taxi companies or someone in Homer and our boat was the closest so we were able to get there quickly and save him.

The company was the highlight of this hike--but the views were tremendous and it was a great training hike for me as I am doing a 26 mile backpacking trip in a week so I'd carried a 25 pound pack. If I were to do it again I would like more time before taxi pickup so I could pick berries, but it turned out to be just about right for the hiking part of it. I would not have wanted to do it if the cloud cover was low or it was rainy; along the ridge there is no obvious trail and I wouldn't want to chance missing the trail down.

Very beautiful. I love Homer...we were there back in early June. It rained on us so we didn't get to take a lot of pictures but had some good halibut. :)

You must have been there in late June; we had no rain the first 2 weeks of June. Sorry you missed the good weather; it was beautiful!

You must have been there in late June; we had no rain the first 2 weeks of June. Sorry you missed the good weather; it was beautiful!

Hi Michelle,
Jeanne and Bill here, the Miami couple who went on the Grace Ridge hike with you and Kathy. What a beautiful hike. We also had a great time, and it was such a pleasure sharing stories and time with you and Kathy. You two are my inspirations as you charged up that mountain with ease. Though we did not go all the way across the ridge, the views we had were spectacular. Good luck on your next adventure and be sure to look us up in Miami if you make it this far south. Jeanne & Bill Kaufman(305) 669-8458