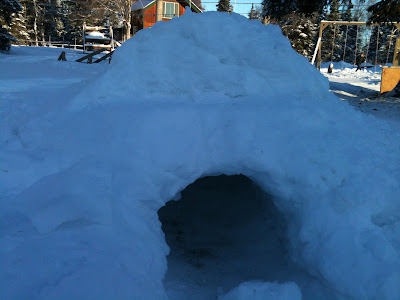 Denver gets all sorts of bright ideas, some of which he follows up on, others that he does not. On New Year's Eve we were in Ninilchik at my aunt and uncle's ranch when Denver decided to build a snow shelter. He was out there piling up the snow and digging out a tunnel within minutes, focused on his new project. Next thing I know he's saying, "I want to sleep in it!" It was 0 degrees out when he said that, with the lows predicted to be -6 for New Year's night. No one there thought he would really do it, including me. Or if he did it, he certainly wasn't going to make it the whole night. In fact, a couple of his cousins said, "We want the second shift when you come in." Denver told them, "If you think I'm going to come in then you don't really know me!" I thought to myself, "I must not know him either!!"

Denver started preparations in earnest, asking me and my cousins for advice on staying warm. I recommended 3 sleeping bags. Denver built a giant plastic bag to put them all in so he (and his sleeping bags!) wouldn't get wet (he was thinking about how wet he got camping in December). He rounded up two foam backpacking-type sleeping pads, and wrapped his pillow in a trash bag also (which I convinced him to take off before he went to sleep, in the name of comfort). 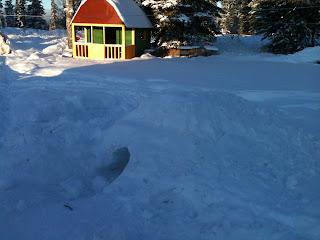 He decided to wear long underwear and sweatpants and a sweatshirt, his balaclava and foam facemask. An old sleeping bag would be fitted over the entrance to his snow shelter to keep out the cold.

Come midnight and the end of the fireworks display my cousin Todd put on, Denver prepared to sleep. I went out with him to get him settled in. He stowed his sleeping bags in the tunnel (1 bag inside another, the other on top and plastic trash bags around them all), ditched his boots and jacket and crawled in. He took off his headlamp, I secured the door with a little breathing hole and we said goodnight. It was 12:30 a.m.

My biggest concerns were that 1-he would get frostbit and not wake up to know it, 2-that he would suffocate if there wasn't enough air, or 3-that his facemask would get covered with frost and he would suffocate. It was hard to believe that he could actually be warm in -10 degree weather (Yep! I got to ten below zero that night!). He said he was actually on the too warm side, but he wouldn't have wanted fewer sleeping bags. He slept the entire night and in the morning he had to take off his facemask because he was too warm.

Denver reported he would make a few modifications next time: He would build a deeper tunnel. As it was, if the blanket over the entrance hadn't been there, his head would have been half in and half out of the shelter. He would want his entire head to be inside. He would also build an airhole in the top for additional airflow in case the blanket was put on too tightly. Finally, he would take a thermometer inside the shelter with him to see how warm it got in there. Supposedly it would be at least 32 degrees inside a snowcave as the snow provides excellent insulation. The Boy Scouts have a campout planned for next weekend so he will have an opportunity to try out the modifications. And I told Denver if he ever builds a snow shelter in our yard that I'll sleep in it with him. I want to try this too!!

Have him take a candle w/holder...it will warm the snow cave up to a toasty 32 degrees, if sealed properly. Always used one in survival training. Air hole a must though.

WOw, that is quite an adventure.

I heard of a local who put hay under the sleeping bag for warmth and took a candle in the shelter with them. The hay caught fire and the kid had extensive burns all over his body. I think we'll pass on the candle, or use it to heat up the cave before getting in!

Hi Michelle,
This is Heather, Saw you posted a bit ago on my blog. I'm glad your doing well.

Ah--candle lantern...yes. We have one of those.
Plus he'll have to make it big enough to fit a candle! The last cave was "just" large enough to fit him with no room to spare! However, there is a big pile of snow growing in our yard as my son wants to take me up on the offer to camp out with him! There may be a sequel!

Hi there,
Sounds like you're all having a lot of fun.
Please do be safe. I spent a night with a bunch of snowshoers in a cave we dug. There is an art to building them. These guys wanted a condo city which I begged against. In the end it was too big. There were 2 entrances and they created just what you don't want, a draft. Other thing is ..that came to mind when Denver stayed until 10 am, I too liked sleeping in, and/but little did I know that the ceiling was beginning to collapse (too big, again). I had to slither out dragging my bag and pack. It was horrifying to imagine what may have happened.
Please have fun, but be safe! Meg, in Seattle

I also have had the fire experience.
Another cave, another time. (wow, you're bringing back memories)
I had gone to bed early, and left a candle burning for the friend who would join me. I was sound asleep when he (outside) saw a flash. The candle had burned thru the bottom of the holder (dum) and allowing the wick and a bit of wax to land on my tarp. It was actually ignited and fumes could have suffocated me had my friend not reacted. I was sound asleep. Too bad it is so dangerous. Stick to headlamps. Forget the fire. Meg in Seattle

Meg,
We've decided: no candles! And Denver is definitely a 'cozy' type--I can see guys getting on an ambitious building spree though. Cozy is my thing too, though I had to break through to this level of cozy! ( :