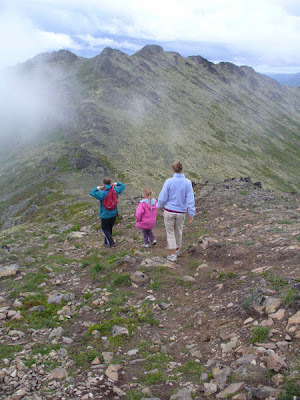 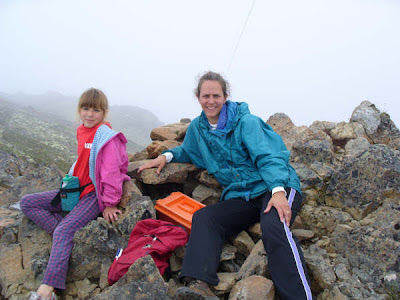 Thursday, June 12 we drove to the mountains north of Soldotna and hiked the Skyline Trail, which is 2 miles round trip, with an expected hike time of 3-5 hours. Aurora had been begging for weeks to climb a mountain, so this was her chance. I'm not sure of the elevation change of the trail, but it is somewhere over 2000' I'm guessing. The day we hiked it, the peak was in clouds, so we didn't get much of a view from the very top. It took us 2 hours to hike up, with lots of stops. It was drizzling as we were heading up, and though I was wearing shorts and a sleeveless t-shirt, I was soaked with sweat. Though Doug and I hiked this trail 3 years ago when we were up here, because of the clouds, I was not sure where the official peak was. We wanted to get to the peak more for Aurora than us. A couple of times we would reach a little peak, but when that wasn't the one, kept saying, "Let's go just a little bit further." Finally we got to a spot where Aurora said, "OK! We can go back now!" As I was sitting there I looked up and saw a stake a little ways above us. I said, "I think that's it!" and with renewed energy that we didn't think we had, we pushed to the top and got to sign the book in the orange box....a guestbook of sorts! It took us 1 1/2 hours to get down, and as Aurora said, "My legs feel like jelly!"
The trail is fascinating just to watch the change in vegetation from the bottom to the top. It starts out as so lushly vegetated, with plants hanging over the path and spruce trees towering over us. As we got higher there were fewer spruce, then there were no trees, just alders and bushes, and then hitting treeline where vegetation doesn't stand more than a few inches tall. Suddenly a cold breeze sweeps by and it is time to start putting on all the layers of clothes taken off earlier in the hike. Gloves and a hat would have been nice!
The trail is a single path, unimproved except for one area where the erosion was exceptionally bad and they put in 10-15 crude steps. Otherwise one must scrabble along as best as possible.
Current berries were beginning to ripen at the bottom of the mountain, and about halfway up they were green, and looked like they had a ways to go before they ripened!