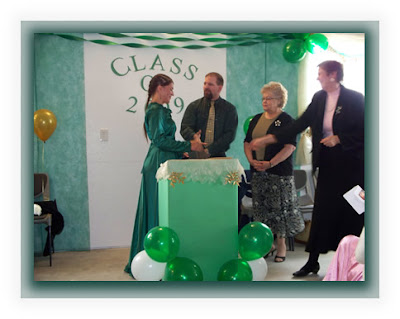 Yesterday was a special day for Razdolna School: it had a high school graduate for the third time in the school's 25 year histo 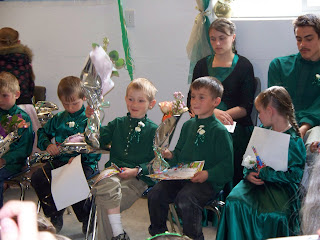 ry.
There were also 8 kindergareners graduating (their biggest class of kindergartners ever!) and 3 eighth graders being promoted to high school. The sad part is that this may be Razdolna's last class of graduates as well. The school building has reached its capacity and the population of the village is growing rapidly (next year's kindergarten class is expected to be 12 students). The villagers have worked hard at getting funding to allow them to build a new school building since the school district will not build schools in the villages, but they have run into a plethora of stumbling blocks. Thus, if they do not have a building by fall, the 7th through 12th graders will have to drive 25 minutes down the rutted backroads to Voznesenka's school, the next closest Old Believer village. While this plight did not mar the specialness of the day, it was on the parents' minds, as many of them came up to my husband and said, "We don't want our kids to go." 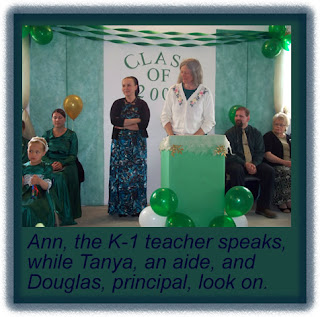 The Russian Old Believers in Razdolna know how to do a beautiful celebration as evidenced by how they transformed a local garage into a tastefully decorated hall. The school building is too small for a celebration (it can only hold 50 people, and there are 50 students!), so one of the villagers donated the use of his garage. It is a huge garage, with the front section used for spraying down and cleaning up his boat. The back third of the building is a immaculately clean room almost as big as the current school building (In fact, many parents came up to Douglas and said, "Why don't you see if we can use this building for our new school?" When Douglas asked the owner she said, "Ask my husband when he comes back from fishing."). It was done up with cloth, balloons, streamers, window treatments and more. All of the kids were wearing matching outfits that the mothers have sewed in the past few weeks.

After the ceremony, in which each of the 8th graders and high school graduates spoke, there was a wonderful spread of native foods. The previous day a student was sent door to door around the village on a 4-wheeler asking each family what food they were bringing for the party. Nearly everyone in the village was there besides the men who were out fishing.

The high school graduate will receive an $11,000 scholarship to UAA, and she also receives $4000 from Project GRAD, a program that seeks to get more graduates from the villages. In the past, many Old Believers would drop out after 8th grade (which is why they changed it to "promotion" rather than "graduation"!). Boys can earn good money working on the fishing boats with their fathers, and girls get married or help their mothers at home. More and more the kids are completing school, though, and many are going on to college.

There are now about 300 students in the 3 Old Believer villages at the Head of the Bay. Some of these families moved to 7 different countries, persecuted in each, before they found this oasis near Homer, Alaska. They are struggling to retain their traditions, religion and identity, though assimilation was obvious even at the graduation ceremony: a few students from Voznesenka came to the ceremony, and when it was over they clapped. The Razdolna villagers looked at them strangely; in their tradition, they do not clap. One mother came up to Douglas after the ceremony and said, in the ultimate compliment, "I would have clapped!"

I am constantly looking up information on Alaska and just happened upon your blogsite, once I started reading, I was hooked.

All my life I have wanted to live in Alaska but have never found a way to make that dream a possibility. Now my 15 year old daughter will be heading there with her class at the International Academy West high school in Michigan. They will be there the last week of June, and 1st week of July.

I love to hear that people are hooked on my blog! It keeps me blogging knowing that someone is out there waiting for another post!

Hope your daughter's trip up here goes well. Two weeks won't be enough, but it's a start!!