Governor Sarah Palin has put Wasilla on the map since she was once mayor there. I'd driven through it once before on the way to Fairbanks, but not since it became a place on the map. So I was anticipating a visit there this past weekend for my son's state wrestling tournament at the Wasilla Sports Complex.

I've heard Wasilla described as "a giant stripmall," and that was definitely my impression. Most of the city was strung along a few miles of highway, the route people must take if they are driving to Denali or Fairbanks (or anywhere north!). On a Friday evening the traffic was backed up bumpter to bumper for miles as people headed out of town. To my small town sensibilities, it was somewhat overwhelming: every fast food place in existence, traffic lights, traffic, big box stores (Fred Meyers, Target, Sears, Walmart). I hadn't realized how used to Homer I have gotten, where non-chain stores are the exception rather than the rule, and the biggest store appears to be Ulmers, the local drugstore (in the old fashioned sense of the term). 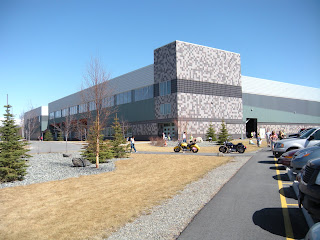 The Wasilla Sports Complex (pictured here), built at a cost of $16 million while Palin was mayor of Wasilla, is quite the complex. What you see in the picture is the hockey rink in the winter and an all-purpose room in the summer with a running track all around the top. The other half of the building is a turf room for playing soccer, and there is a pro shop, concessions and meeting rooms as well. 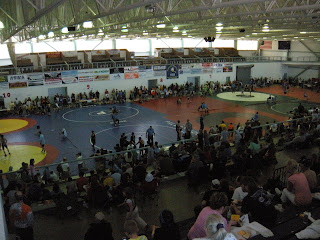 There were nearly 700 school age kids wrestling and the stands were comfortably full but not close to packed. It never felt too crowded (and that's coming from my small town standards again!).

One other very attractive feature of Wasilla is its outdoor park area just off the main drag in about the middle of town. It has one of those huge wooden playgrounds that kids can get lost in, basketball courts (that had games going on all courts when we were there), tennis courts, a skateboard park, paved walking/rollerblading/biking paths, fields to play ball on and a picnic pavilion. This park was packed on Saturday evening when we were there--a bright, sunny day in the 70's. The 70's??!! Yes--it totally freaked us out how hot it was! We checked the temps in Homer at the same time: it was in the 50's there. Needless to say, we enjoyed the warmth, though my son did comment, "I don't know how I ever put up with the heat when we lived in the Lower 48!" I think we're in the right place because we like 50's and 60's more than 70's and 80's too!

Overall, it was interesting to see the town Palin was mayor of before she became governor. Seems like quite the stretch to jump from politics in a relatively small town to Juneau!