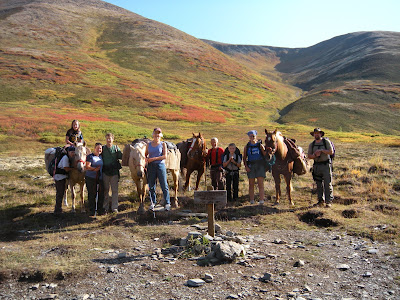 What with the death of our nephew a couple weeks ago, moose hunting, classes beginning, starting homeschooling my kids and homeowner challenges, we had every reason to cancel our trip up the Resurrection Pass that we'd had planned for 6 months, but opportunities like this don't fall in our laps every day, so once again we carved the time out of our crazy lives to take a 37 mile hike up the Resurrection Pass over Labor Day weekend. And once again the blessing of the weekend was of being surrounded by family and the wild remoteness of Alaska.

When I speak of opportunities "falling in our laps," I mean that literally. My cousin Angela and her husband Klaus have been trying to make this trip for years, and each year some 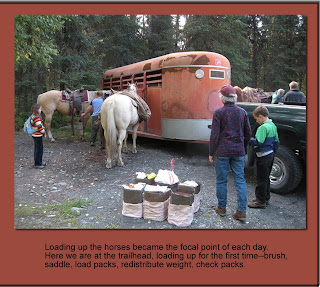 thing happened to upset their plans. Our next challenge was trying to find time that would work for all of us: Angela and her family, my aunt and uncle, and our family. Labor Day weekend ended up being a viable option, especially since we would have the horses along packing most of our equipment and food so the hiking wouldn't be quite as grueling. All we really had to do was show up with our food, clothes and gear; Angela made the reservations 6 months in advance (to the day, since the cabins along the trail are filled nearly every night of the summer months), and Delores and John brought 2 of their horses and picked up 2 more on the way (one of Angela's and one of Ron 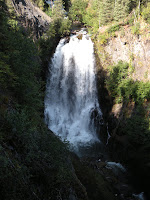 The first day of hiking, about 9 miles up to the Juneau Lake cabin, was, well, pretty boring. It was well treed with few views and didn't inspire me. We'd started in mid-afternoon, so we had to move right along with only one break for a waterfall. In the Lower 48, this waterfall would probably be a huge attraction, but a 4-5 mile hike precedes reaching this plunging, roaring mass of water, and it got only a quick 10 minute break from us.

All the cabins along the Resurrection Trail are new within the past couple years, so they were clean and nice, but also lacking character. Juneau Lake's housing used to be an old trapper's cabin that was very dark and had few, small windows. All of the new cabins are large with lots of windows, all with stoves (the cabin in Devil's Pass had an oil heater since there was no wood for fuel, and it used to be an A-frame with a loft). Still, we had 9 people in our party, so a coup 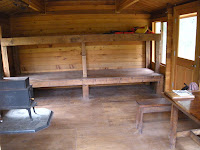 le got to sleep on the floor each night.

Each cabin had it's special highlight: Juneau Lake was a treat for the kids since there was a canoe available that came with the cabin so they had a blast paddling around, and we even snuck up close to a couple of loons. The highlight of the cabin in Devil's Pass was crowberries: the ground was covered with a carpet of berries. Although we'd rather have been picking blueberries since crowberries are a bit seedier and less sweet than the blues, we were happy to be picking anything. The final night we stayed near a river and there was a huge patch of currants with a spattering of highbush cranberries to fill our free time with picking.

Day 2 brought another 9 miles of hiking, but we had all day to get there so we took a few more breaks. We had some elevation gain this day as we entered Devil's Pass. Passing up berries was the agony of the day. We passed bushes loaded with watermelon berries, crowberries, blueberries, highbush cranberries and more. With the horses we couldn't just stop and pick at our leisure. It was delightful to get above treeline and see the vistas of mountains. We saw about 25 Dall sheep on a mountainside above us, tiny pinpoints of white. The binoculars just made them slightly bigger pinpoints of white, but it was still neat to know they were up there. 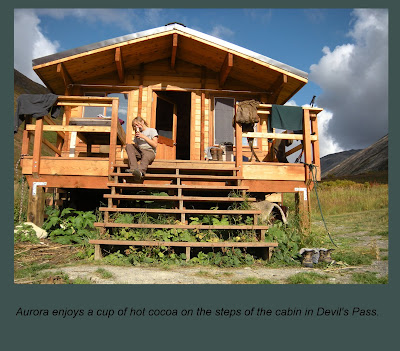 Day 3 was a bit grueling. We had 13 miles to hike, and didn't get started till nearly 11:00 by time we ate and packed and then watered, fed and loaded the horses. We were above treeline much of the day, and were thankful that it was a beautiful, sunny, warm day. The picture at the top is of all of us at Resurrection Pass (2500 feet) where we met a couple mountain bikers taking a break. Soon after we stopp 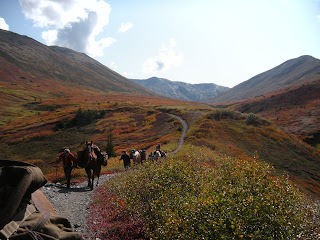 ed for that photo break we met a group with about 10 horses packing out a moose they'd shot. We took numerous breaks this day as there were a number of beautiful mountain streams along it, but it was with great relief that we finally got to the cabin after 8 hours of hiking. Of course, the work begins in earnest then, as the horses have to be tended, everything unloaded, dinner made, and sleeping arrangements laid out. We were all happy to be in bed by 9:30 that night.

Day 4 was back into trees, but much of it was scenic and if I didn't know better I would have thought I was in the Midwest. Popal trees were shedding their yellow leaves onto the trail, with the yellow canopy over our heads making a cozy tunnel at times. We encountered more bear scat that day in the last 4 miles than we'd seen on the entire trail. The trails were lined with ripe rosehips--more rosehips than I've seen in my entire life. And since it was Labor Day, the mountain bikers and hikers were out en force, so it seemed we were constantly moving over for or scootching around others on the trail. The northern end of the Resurrection Pass is within 2 hours of Anchorage, so makes for a viable day trip for city folk.

Packing horses made this trip more interesting and a new experience for us. I led the lead horse, Freedom, nearly the entire 37 miles save a couple miles Aurora rode him. It made for a quiet, lonely time in a way since with my hearing impairment I couldn't join in the conversations yelled across horses. My uncle followed with Eclipse, a young horse that bucked Aurora off Day 3 when she tried to ride him. Dazzle (Aurora's love) and Lightening followed, led by Angela and Delores. Klaus and Douglas are not horse people and were happy to bring up the rear with the kids, snatching berries and enjoying the scenery.

This is a multi-use trail, with backpackers, mountain bikers and horseback riders sharing it in the summer, and cross-country skiiers, dog mushers and snowmobiliers sharing it in the winter. I felt a little tension when different groups met, partly because horses can be unpredictable. I am no expert horse handler, I had the largest horse by far of the group, and I was leading so I was always on the lookout for oncoming traffic that might spook the horses. Luckily Freedom was not skittish on this trip (he's been known to be skittish when I've ridden him) so it was mostly an uneventful trip despite meeting dozens of others on the trail--mostly the last day as we neared the northern trailhead and people out for the day. The weather was gorgeous--couldn't have been better--so it wasn't like I would get soaked stepping off the trail into the grass or like we were miserable and just wanted to get there (wherever we were going that day).

I felt deeply like I was part of Alaska during this weekend of packing. It was an extension of our weekend of moosehunting, with the land making its way inside my psyche and hooking me. Over and over I read about people falling in love with Alaska and not being able to leave--not wanting to leave. It so often catches people by surprise; they don't necessarily go there looking for an experience. Over and over I have thought to myself since we've moved here: "I'm never going to be able to leave, even if I want to." I feel like a romantic, mushy ninny when I say that. I feel like I'm repeating all the dozens of people I've read who have said that same thing in different ways. I'm embarrassed to admit it has happened to me too. I am hungry for more: I want to experience all this more fully, more deeply, more often. For now, I will sneak away when I can and dream often of the wilds of Alaska.

I am SO jealous. I would have love to make this trip with you! Loved reading about your adventure.