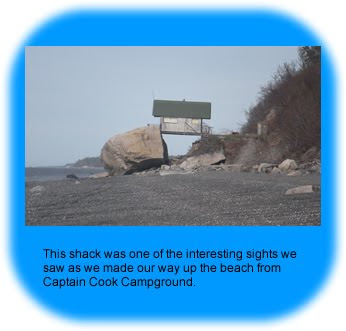 A beautiful weekend and a few days off work for Doug convinced us we needed to get out for our first camping trip of the season. We'd visited Captain Cook State Park the first summer we moved here three years ago and we've been itching to do a 4-wheeling trip for awhile now so we loaded up our Durango and trailer and set out for the 2 1/2 - 3 hour drive up the shore of Cook Inlet, past Kenai and Nikiski to the end of the road: Captain Cook.

This is a nice campground. Fifty-three sites blend in with the contours of the land with different levels and layouts, making it interesting and fun to choose a site. The entire campground is overgrown with Devil's Club, a pervasive, extremely prickly plant that makes it impassable between sites. This early the leaves weren't even out yet, but in a few weeks the huge leaves will spread out, giving privacy to an already spacious campground. On a Saturday night the place was about 40% full, with quite a few campers and RV's and a spattering of tents.

One big draw of this campgroun 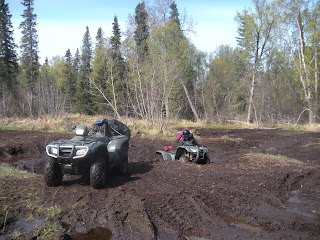 d is the 4-wheeling opportunities, and that provided the interest of this trip for us. Four-wheelers are not allowed in the campground, so we had to drive about a mile to the park entrance with the trailer and unload there. We didn't have a map and really knew nothing about the land we were about to 4-wheel, so we set out with an attitude of adventure and exploration. Doug and Aurora rode the Honda Foreman and Denver and I rode the Honda Rancher (80% of the 4-wheelers sold in Alaska are Honda's). Not a mile down the trail I got stuck in the muck. Doug got through, got out the pull strap and hauled me out. Shortly after I got stuck again, and again, and again, and again. By the third (fourth? fifth?) time we had our routine down: kids would jump off, Doug would pass me, hook up the pull and I would rev it as he pulled. The strap would get tucked away and off we went again for another few hundred feet, if we were lucky.

After a couple miles I looked at Doug, he looked at me, and we made a U-turn. We'd had enough mucking. We'd heard the trail was mucky, and if it had just been us without the weight of the kids on the back it might have been different. None of us were having fun, I'd almost lost my boots a few times in the thick, viscous slime and I was covered with it. We got stuck another time or two heading out and it was with great relief that we arrived back at the parking lot. We hadn't hauled all that equipment all that way for 4 miles of misery, so we headed down to the beach. We'd heard that people go out to the point of the Peninsula (across from Anchorage) on the trail and then would return on the beach, so we knew the beach was fair game. 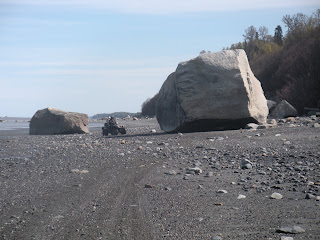 Riding on the beach was fun. While we had to weave around the rocks some, it was smooth and we didn't get stuck, so that's all that mattered to us. We went out a few miles and then were ready for a break and the tide was coming in so we returned to the parking lot, loaded up and headed back for a few hours of relaxation and lunch. We noticed on the tide table that low tide was at 8:30 Kenai River time, so figured if we headed back out on the beach in late afternoon we could catch a low tide.

At 4:00 we donned our 4-wheeling gear (wind jacket, gloves, helmets) and headed back out to the staging area. When we reached the beach we were dismayed to see that the tide was still very high--too high to 4-wheel on we thought. We headed back to the trails we'd been on 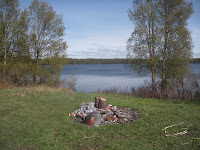 in the morning and a beautiful, secluded lake (with broken glass and a pile of trash) and had snacks and explored for awhile waiting for the tide to go down. Forty-five minutes later, the tide was low enough for us to go. We went out nearly 12 miles, stopping once to let the kids climb giant boulders and give our sore thumbs a break. Areas with wet, smooth sand we could cruise at 40+ mph, while in other places were were down to 10 mph maneuvering around boulders and rocks. This kind of 4-wheeling we liked, and we would go back there for that. 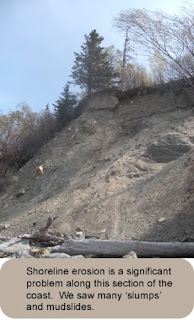 of the more interesting parts of this camping trip were all of the sounds I was able to hear with my new cochlear implant. Birds, squirrels, the crackling fire, and people talking in other sites were all things I would not have heard a month ago, and would not have heard since I was a young child. One man came over an apologized for his generator running to power his C-Pap for sleep apnea (He and his sons and grandsons were out hunting for black bear. Guess a brown bear messed up his camera and bait set-up). The generator hadn't bothered us, but it was sweet of him to mention it. The best part of all, though, was being able to hear perfectly even with my helmet on. I found that amazing! I didn't think it was possible to hear through a helmet.

Besides my agonizingly sore body and the loads of laundry, it was an awesome trip that we really enjoyed, and we were grateful for sunshine and temperatures in the 50's.

Where did you get the s statistic, 80% of all 4 wheelers are h hondas? I think your number is very incorrect...

I should have cited my source the first time around, because I can't recall where I heard that now. Do you have stats on it? I'd be curious to know.