Starfish and Other Tidepool Creature Heaven! 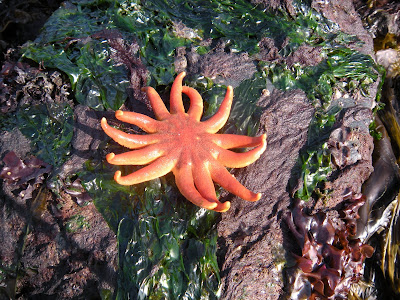 I love tidepooling. This field trip was designed for people like me in mind--never mind that it was for the kids! I learned more about tidepooling and the shoreline ecosystem from a couple days with these naturalists from the Center for Alaskan Coastal Studies than I have in years of bumbling along on my own. 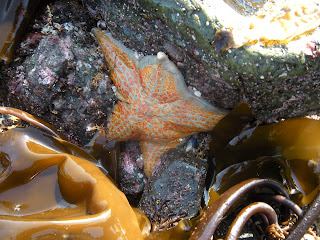 Besides all the dozens and dozens of very cool sea creatures we found, what I found most valuable was the rules of etiquette for tidepooling: 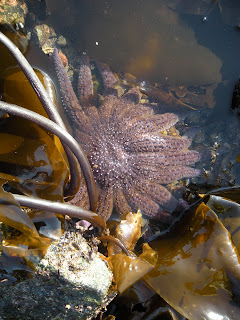 When I've tidepooled in the past in the kelp beds on Bishop's Beach I have seen amazing and cool things, but turning over the rocks is where all the really cool stuff is! Starfish, hermit crabs, shrimp, worms, sea cucumbers, limpets, snails, clams, chitons, anemones and more were found in profusion under every rock. Sometimes I would pop up a rock and nothing would move and it looked like there was nothing there. After about 10 seconds, there would be a little movement of a hermit crab, then another, and pretty soon the space under that rock would be teeming with movement from all the creatures.

Everyone has their favorites when tidepooling. Mine was starfish. The orange starfish pictured at the top eats other starfish. The purple star to the left was moving, creeping through the water as I watched it. Another mom on the trip loved the little fish that hid under the rocks. Apparently there are so many species of these fish that no one has ever recorded them all. In fact, Patrick, the naturalist from CACS who led our trip, said that we would probably see things in two days of tidepooling that have either never been seen before or else have never been named.

We were encouraged to pick up, touch, identify and share our findings. The CACS received a permit to take certain creatures for a summer of research. Our group was the first of the year to go out, so we were making the initial collections for the wet lab. One girl found a giant green worm that even Patrick had never seen and had no idea what it was; since there was only one we did not add that to the items to go back to the lab. The sheer amount of life in the intertidal zone was mindboggling. I am still shaking my head, picturing all creatures we saw. After two hours of tidepooling Jakalof Bay my head was swimming (literally!) and I was overwhelmed with images and information. 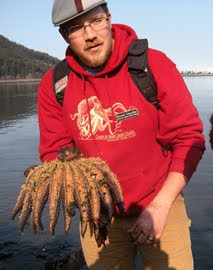 Patrick shared a funny story about the Decorator Crabs. These crabs normally pull seaweed and other plants onto themselves as camouflage (I saw some seaweed swimming around and thought it was my imagination! It was a Decorator Crab!) When the Exxon Valdez oil spill occurred there were all these styrofoam things around as part of the cleanup effort. The Decorator Crabs started cover themselves with pieces of styrofoam to blend in. People started seeing these little white crabs scuttling around the beach!

What struck me about this is that people travel from all over the country or world to experience what we did a mere miles from home. The richness of this ecosystem is amazing, and I have a new respect for how each plant and animal is interconnected and plays a role in the system. We saw animals eating animals: starfish eat clams (and each other), crabs eat other crabs, worms eat clams, birds eat all and fish play their role. That's only counting the things we could see, and is hardly even counting the plant life. That we can see these things right here where we live is such a cool thing. I am so glad to live in Homer!