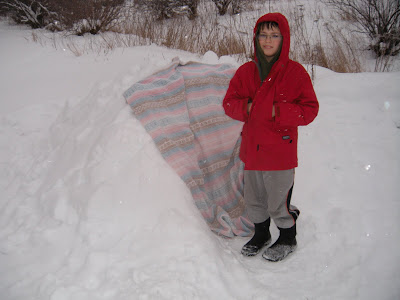 After Denver stayed in his snow shelter New Year's weekend, I offered to stay in one with him if he built one in our yard. After we made him shovel off our front porch there was a huge pile of snow so he decided to start working on it. It was ready in time for a Saturday night outing.

We covered the door (as you can see in the picture here) and put a thermometer inside. It was 12 degrees outside and 25 inside (without us in there). We each had two pads (I used two thermarests; Denver a thermarest and a pad). I had 3 sleeping bags while Denver had 2 sleeping bags with a sleeping bag sheet. I wore my hat all night, but nothing on my face, while Denver wore his facemask and balaclava again.

When it was time to crawl in, I went first, scootching my pads in, then going back in the house for my sleeping bags. The shelter was COZY, to put it mildly. The entrance was just wide enough for my shoulders to fit through, and only high enough for me to wiggle in. Once inside, if I laid on my side my shoulder would brush the ceiling. So getting in was a challenge. I took off my boots outside, then wiggled my way into the sleeping bags and dislodged large amounts of snow from the roof as I got my jacket off. By time this was done my hands were frozen so I put my gloves back on to warm up. And I had a moment of panic. I'm not prone to claustrophobia, but there was just enough space for the two of us and there would be no getting out fast. I started saying a calming mantra, closed my eyes and calmed down in a few minutes.

Then Denver came out and did the wiggle in routine. Problem is, the blanket over the door fell off after he got in. I crawled out to put it back up and got completely covered with snow (I didn't have my jacket on!) and then had to wiggle back in, this time with Denver in there. I finally got back in there and all the snow on my shirt started melting so I felt damp, but despite that, I was warm, and my frozen hands had already warmed up. Within 20 minutes I was groggy and....ready to go to the bathroom! NO WAY! I willed myself to sleep.

I woke up a number of times during the night like I usually do when I'm camping. I would check on Denver, do a mental check of myself (ignore bladder!) and then fall back asleep. I was impressed with how comfortable I was. I would say I was more comfortable than I usually am when I am tent camping (could be the two pads!!). The air temperature was fine too. I normally sleep with a blanket over my face, but I was never uncomfortable with the temperature or worried about being too cold. It was an impressively nice experience.

At 6 a.m. I woke up and Denver was shifting around ready to get out. We were both due for a bathroom break--no more delays! That's about the time I usually get up, so I didn't think I'd be getting back to sleep so we headed into the house.

In some ways I think I would prefer a snow shelter to a tent in the winter. I think it would be warmer. On the other hand, it did occur to me that if there were an earthquake that it could be a bad thing. However, it was overall a neat experience, I am glad I did it, and now I think it would be fun to see how little equipment we could do it with--fewer pads and sleeping bags--and still be comfortable! 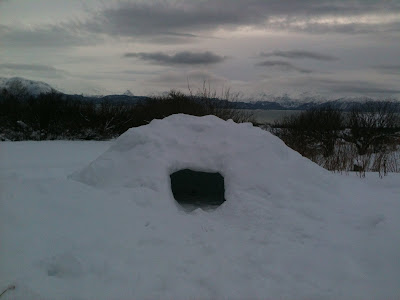 Good for you! It sounds like you had a great time. I spent the night in a tent with a friend during an ice storm in Missouri and let me tell you.. It was not warm, and it was not enjoyable! So your experience sounds much better. I love your posts! Thanks for sharing!