When we lived in Arizona and then Michigan, we explored everywhere within a weekend trip radius around where we lived. When we'd exhausted our list of places to go, we got the itch to move on. This year marks the 10th year we've lived in Homer (and I've been blogging about it!), and we still are finding all sorts of places nearby that we've never checked out. The Alpine Ridge Trail across the bay in Kachemak Bay State Park is one of those trails that has popped up on our radar a few times, but that we had not made a priority to get to. This summer it came up 3 times:  our dental hygenist mentioned it, the cross-country running team was hiking/running it, and a friend told us she liked it more than Grace Ridge. Well! Time to check it out!

Aurora had a day off and I was available, so we decided to dash over one Sunday in July. We were blessed with nice weather, and I was grateful that the grass wasn't wet with rain or dew as we climbed the Saddle Trail from Halibut Cove, and then turned onto the brushy Alpine Ridge Trail.

I was thoroughly entertained by the rotten? chewed? sign that was only partially legible. It is a sign of the times in Kachemak Bay State Park. I hear it is the largest state park in the country, but maintenance is minimal. Well, in some areas, as you will continue to read this post! 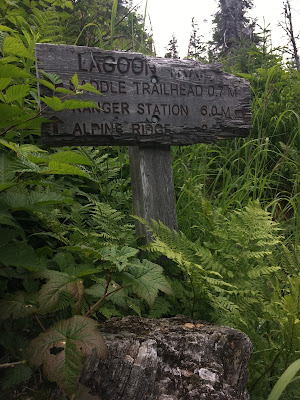 Gorgeous views of Halibut Cove, the spit, Kachemak Bay and Grewingk Glacier and Lake are features of this hike, though it takes a bit of climbing to get to them. 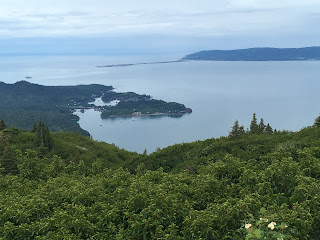 A feature I'd never seen before but thoroughly appreciated was the rope system:  in really steep, muddy sections (maybe six spots total), a rope was tied to a tree and one just had to grab on and climb like rappelling. In the picture below, it looks crazy steep and nervewracking, but it was never as bad as it looks. 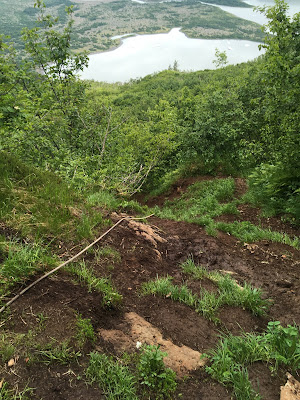 Here is the panoramic view of the area from the overlook:


Because our hike up Alpine Ridge was shortened due to a bear on the trail ahead of us, we decided to take the Lagoon Trail which branched off from the Alpine Ridge Trail. Ha! What an eye-opening, learning experience! Even my uber tough daughter said it wasn't worth it after less than a half mile of climbing over and under huge logs, falling into the brush, and squeezing between trees. It felt epic. As we found out later, they tried to re-open the Lagoon Trail a few years ago after so many spruce beetle killed trees fell on the trail, but after a quarter of a mile they gave up. The wilds of Alaska have reclaimed that trail.

After that expedition, we decided to do a quick jaunt over to the Grewingk Glacier Lake. I knew they'd been working on a new trail from the top of the Saddle Trail over to the glacier outwash area, but hadn't seen it, so figured we had some time to do so. The new trail feels like a superhighway through the woods. I'm sure once the scar of construction wears off and it grows up, it will be very nice. The trail wasn't open yet, but we didn't realize that until we met one of the three crew members who is working on this multi-year project. He warned us there were others ahead. The next gal we came across was digging out a huge boulder out and warned us not to return on this trail since she would be using dynamite to break up the rock. 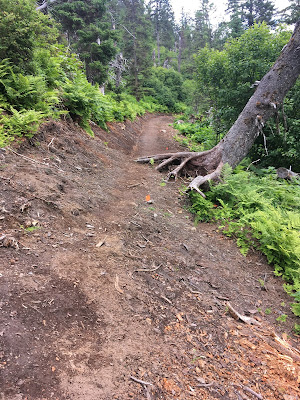 There were a lot of icebergs on the glacier lake, and folks sitting on the shore mentioned seeing hunks breaking off of icebergs as well as the glacier. 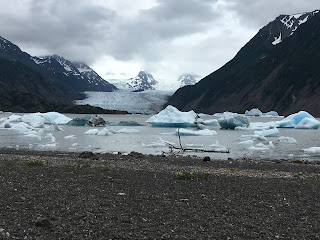 The most entertaining part of the trip was returning to the Saddle Trailhead at high tide. There was hardly any beach left because the tide was so high, and I counted 35 people sitting on the rocks at the base of the trailhead stairs waiting for water taxi pickups. It felt like a party, of strangers, except when we knew some of the folks, though many of the Homerites had their own boats moored offshore.

It was a good day of being out there enjoying Alaska wilds. Next time we hope not to see a bear and to push on up the ridge where I hear one can get views of the Harding Icefield. More areas to explore! Guess we'll have to stick around Homer longer!