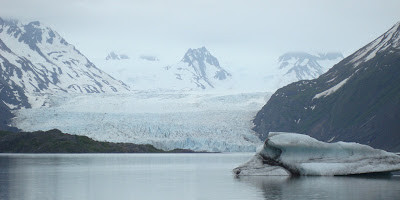 Today was Trails Day 2008 at Kachemak Bay State Park, across Kachemak Bay from Homer. Volunteers were sought to clear and improve trails, pick up trash and other needed tasks. We signed up for the Grewingk Glacier trail; it was supposed to be a good hike and project for families and groups. Water taxi rates, normally $75 per person to get across the bay, were only $20 per person for volunteers. 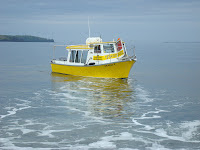 The taxi got us over to Halibut Cove in about 30 minutes from the Spit. It dropped us off on the beach near our trailhead. The trail was a well-maintained single track for about 3 1/2 miles until we got to the glacial till field (not sure if that's what it is called) where the glacier had retreated. We ate lunch on the beach of Grewingk Lake, then hiked as far around the lake as we could. The outflow river is too big to ford so they have set up a tram sopeople can pull themselves across it. It was quite a ways out of our way so we didn't check it out (we'll save it for the next trip!)
The pit toilet at the lake was an entertaining sideline: open top, removable seat and falling apart. 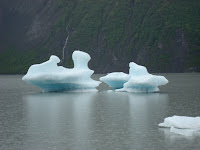 We recommended that next year it get fixed up, even if technically it's not "trail"! As we hiked around the lake, terns started divebombing us, and twice they actually touched Denver's head. We figured there was a nest nearby, but didn't realize how on target we were until Douglas noticed an egg lying in the middle of the beach, looking like another rock. There was no nest!

The lake was full of icebergs--some quite large and others the kids hauled out of the water. My favorite iceberg is the one pictured here that looks like a snowmobile.

It was a great, but long day of hiking. It was probably 7-8 miles of hiking over mostly flat terrain, but we had to check in at 7 am and we didn't get home till after 7 pm! As part of our training for the Chilkoot Trail we took a couple of loaded packs so that added to the challenge for us. As always, there was plenty of bear scat along the trail. We took the saddle trail back to Halibut Cove and it was a quick hike: only 1 1/2 miles back to the beach. There wasn't too much work to do, so we had plenty of time to hang out and explore (and take naps!) before the taxi came to pick us up in the evening.