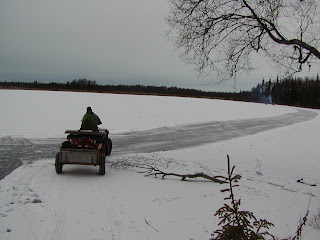 When my aunt and uncle moved to Alaska 40 years ago they started a tradition of having an ice skating party every year that the ice froze smoothly enough to skate. This year conditions were perfect when the ice froze, creating deep, smooth ice, and today was the day of the skating party.

It was snowing heavily when we left home, and the wind was blowing the snow horizontally. I was sure skating would be canceled in such weather, but to my surprise Delores said the weather was fine in Ninilchik--no rain, no snow--so we decided to make the 1 1/2 hour drive to join the skating party tradition. We went from snow at home to rain in Homer and back to snow as we headed up the hill out of 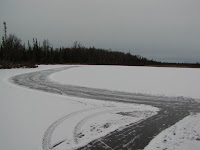 Homer, then back to rain again until we hit Anchor Point when all precipitation stopped and the roads were dry (whew!).

The lake is 6 miles out of Ninilchik down Oil Well Road and then some bumpy dirt roads (unmaintained, so luckily not too much snow yet!). Delores & John used a piece of plywood held in front of the 4-wheeler and made 8 swipes around the lake on Wednesday to clear the track you see in the picture. It is a .4 mile loop around the lake, and the kids and I skated for 3 hours today, so I wonder how many miles we went!! Actually we could (and did!) skate anywhere on the l 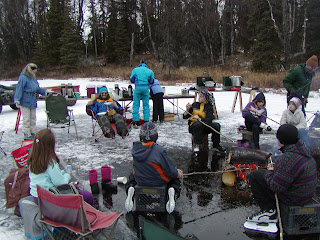 ake because the snow wasn't very deep, and it was fun to "make tracks" in the fresh snow.

We had a fire going and a spread of food, including the Alaska standbys of moose dogs (as in "hot dogs") and salmon dips and salads. It was a breezy day, but not so cold that we were uncomfortable. I wasn't sure how we'd hold up being on an exposed lake all day, but what with the exercise of skating and occasional hot drinks, we were toasty all afternoon.

The kids were in skating heaven for 3 hours, playing tag, shoveling paths in the snow, eating desserts and basically hanging out on skates. I've skated ponds before, but never a whole lake, so this was a real treat. I will admit, I am sore, though I'm just itching to get back on skates and go some more!

As a side note, my kids were out with friends on Beluga Lake in Homer this past week and they tried an experiment (the dad--not the kids!). There were large air bubbles near the surface in the ice and Don poked a hole in the ice to the air bubble and quickly put a lighter to the hole. Each time a flame shot up, sometimes as high as 3 feet! Apparently the rotting vegetation in Beluga Lake gives off methane, which gets trapped in air bubbles when the water freezes. Thus the spectacular side-show! I want to get down there and try it one of these days. If I do I will treat you to a picture of this on my blog!

Definitely sounds like a good time. Here in Michigan I am not quite ready for the cold weather. We were teased by the Indian Summer this past week so now I am further behind in my prepare for colder weather.

I look forward to seeing the post of the experiment if you get a chance to do that.

I have been looking, sporadically, over the last few weeks at blogs written by people who live in Alaska. I must say, I consider your blog the BEST find of all.

I absolutely love the photos and your interesting commentary. I appreciate your openness about the realities of life in Alaska. However, best of all, in my opinion, is your obvious love for the outdoors, gardening, and nature.

I have read as far back as Aurora's bout with pushki. Since I'm reading your posts backwards (I tend to do magazines that way, too, so it feels very familiar :-) I had been wondering about this unusually named plant. When you said Cow Parsnip it clicked into place.

Oddly enough, although we have it here (in Montana where we live) no one has ever reacted to it. Although I knew it could be a bit toxic and I'd heard you could get a skin reaction, I thought it was a rare occurance. Apparently not.

You can be assured I will continue to follow your blog as I seek to learn more about Alaska. Thank you for sharing so much of your life. I feel like I'm 'experiencing' Alaska a bit through your photos and commentary.

Lerrina,
You are so welcome, and thanks for your encouraging words! That is what keeps bloggers like me going!

I was just telling my husband yesterday that it just wouldn't be as fun if I were writing all this in a journal for myself. I do enjoy sharing this wonderful place, and I am often in awe of the incredible beauty we are surrounded with up here. Alaska is not for everyone, but it is a good fit for us right now!

I know exactly how you feel. We have a small resort. I started my blog (http://elklakenews.blogspot.com/) because guests would ask what 'winter' was like, for example. However, you never really think people read these things.

The first time a guest said, "I read (so and so) in your blog", I was embarrased. However, that 'was' the purpose.

Just to let you know - I'm to the morel mushrooms. I didn't even know Alaska had mushrooms! I knew about the berries (we also have wild berries), but the mushrooms (and cow parsnip) were some of the many things I've learned from your blog.

PS - I've read about some of your bear encounters. We also have Griz, Cougar, Black Bear, and Wolves in our 'backyard' (and moose), have you ever considered carrying bear spray?

Yes, I am considering bear spray, though my concern with it is wind (lots of it around here!), and putting myself out of commission instead of the bear if the wind blows it at me rather than the bear!