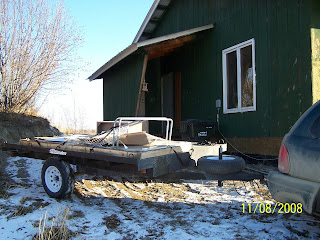 Well, it's a beautiful Saturday in November, and we're spending half a day hauling supplies out to Razdolna.
Since our little Russian school is down 5 1/2 miles of gravel roads, the Kenai Peninsula School District which it is part of will not send it's delivery truck to school. All water, paper, shelves and other supplies are dropped off in the shed at McNeil Canyon School every Tuesday and Douglas (as well as the principal's of the other 2 Russian Schools at the Head of the Bay) has to pick up the supplies there and drive them to school themselves.
Normally it just means a quick stop at the shed to load up our Durango, but sometimes when there are big items like the whiteboard, soccer goals and filing cabinet that needed hauling this weekend, we hook up our trailer and do the hauling ourselves. From where we live we drive 7 miles to McNeil, load up, tie down, cover the stuff with tarps if the weather's wet, and then head 12 miles back up the road to Raz. At times we have to slow to a crawl because Basargin Road is still a 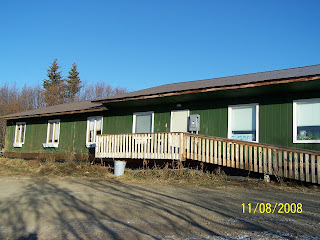 bumpy mess from frost heaves last spring.
As I write this, Douglas is drilling holes in the walls, hanging whiteboards that were ordered in August and have finally come in. After years of trying to figure out a way to get high speed internet access out here, as well as Douglas' annoying persistence, the district tech folks finally made it happen. The school got high speed internet access in May a few days before school got out so I can actually blog from school.
As you can see, the school is in need of a paint job. It is owned by members of the community of Razdolna and the school district leases it from them. An outside paint job was in the plans, but the inside of the school was completely rearranged and painted (by staff and student volunteers), and then new playground took priority. Over the summer a new playground was installed, almost completely at the expense of the villagers (the borough donated the play structure itself). It has become a new hub of the community as kids flock to the schoolyard to play.
The great challenge now is that the village needs a new school. The building you see above has a capacity of 50 people, and with 48 students enrolled this year, they are pushing the ticket. The village is growing and enrollment is expected to hit 76 in 3 years as families with young children begin to send them to school. However, the district will not build a new school; the villagers have to come up with the money themselves. A modest 3000 sq. ft. building would cost $600,000. With 26 families in the village who have to foot the bill, that seems like an insurmountable task (can you imagine someone asking you to foot the bill to build a new school building--on top of your own mortgage??!!). The villagers have been running fundraisers, selling Russian food and bake sales, but that is a drop in the bucket compared to what is needed. The architect fees alone to come up with a plan for the school (which is needed before they can get a loan) were $42,000!
Perspective. So while it is annoying to have to haul our own supplies to school and install them, it is such a small challenge compared to what the Russian's face in building a new school. It gives us a good feeling to know that these students are getting a good education, learning to read and write and do the things they will need to in order to make a good living for themselves.