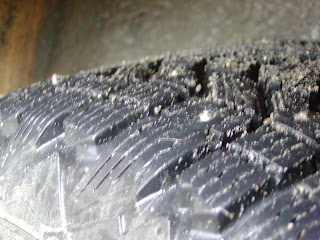 We had a couple of weeks of snowy and icy roads at the beginning of October, leading to a flurry of activity as people got their studs put on. "Got your studs on?" was a common question as I ran into people I knew. And as I drive around town I see tires in backseats of cars and in the back of pickup trucks.

Studs? I thought that was a bit much before I lived in Alaska, but as you can see from the picture, they're just small metal nibs that stick out from the tires to give a little bit better grip on the road. I can see why they wouldn't want studs on roads in, say, the Midwest. With millions of cars traveling the roads, highways would be ripped up that much more quickly. But up here, with only 675,000 people in the whole state, and far fewer cars on any particular road, studs help keep people on the road, especially when a tow truck could take a long, long time to get there in rural areas.

Many people just purchase an entire extra set of tires for their vehicle with the studs already on them. They come either with the rims or without rims. With the rims means that anyone can quickly switch over to the new set of tires--pop off the tires like you're changing a tire and put the new one on. Without rims means you end up taking your car into a tire shop and they charge $15/tire to switch them over which is what we do. Some people may actually screw in the studs themselves and take them off again, using the same tire year round, but I don't know anyone who does this. So when we ask, "Got your studs on?" it doesn't mean we actually put the studs on, it just refers to whether the tires have been switched over.

The car is just a tad bit noiser driving with studs....kind of a clickety-clack sound. But it is well worth the security of better purchase on the roads--especially our very curvy, hilly East End Road out of Homer!