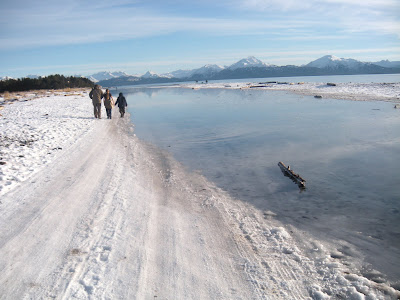 One of our favorite places in Homer is Bishop's Beach. In the winter, though, we don't get down there as often, expecting it to be too windy and cold. Saturday, however, was sunny, calm and relatively warm at 41 degrees so we headed down to the beach for a walk. As we drove up and 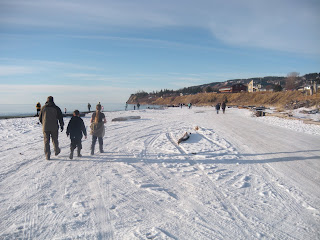 saw Beluga Slough flooded, I grabbed the tide book to see how high it was. Wow! We had arrived at the peak of a +22 tide, one of the highest of the year! The normal thoroughfares for vehicles were under water, and the normally sparsely populated beach was "packed" with 20 or 30 people (as you can see from this picture). I had to chuckle at our definition of "packed." Call that one an Alaskan special!

Normally one can walk the beach 15 miles from Homer to Anchor Point, but we didn't get far before we were clambering over driftwood. Speaking of driftwood, that was such an unusual sight to have such a high tide that the driftwood was drifting that we weren't the only ones stopping to look at it which is why I took a quick video of it!

Very high tides are followed by very low tides, and a -5.3 was going to happen that night at 8:45 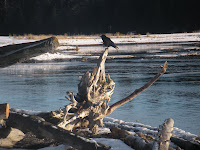 or so. If we hadn't already had plans for our daughter's birthday party we probably would have gone on down there. I've never seen a tide that low, and it was a beautiful, clear night with a nearly full moon. What struck us, though, was that to go from a +22 to a -5.3 is a 27.3 foot tide differential, which is one of the tradmarks of Cook Inlet tides: they have some of the greatest changes of any tides in the world. It sure makes things interesting on the beach!

Beautiful pics. Video wasn't available when I clicked but I'm sure it was nice to view.

Have a great week

Not an earthshattering video to miss...shows up on my computer. Wonder what's up with that?

There's a reason there are so many photographers in Alaska: it is easy to get incredible photos!

Bummed that the video didn't work for me either. Just thought I would say hi and say that my husband and I love your blogs.

What's up with that video?? Works for me...and I've been trying to do more videos. Argh!

The weird thing is the moose video works great. I hate blogger sometimes. :-)