We've never been in Homer on New Year's Eve before so didn't realize what an event it was.  We got multiple invites to events, and ended up going to Bishop's Beach for a bonfire.

We don't go to Bishop's Beach at night ever, so I'm not sure if it is always as busy as it was last night, but I doubt it.  There were at least 4 bonfires going along the beach, some quite large!  A constant stream of cars drove through the parking lot or along the beach.  Groups of people would disembark their cars, go for walks and load up again.  Dogs wandered freely, and it wasn't always clear whose dog was whose.  Fireworks would go off, first on one end of the beach, then the other, then over on the spit, then down on the sand where the kids were playing. 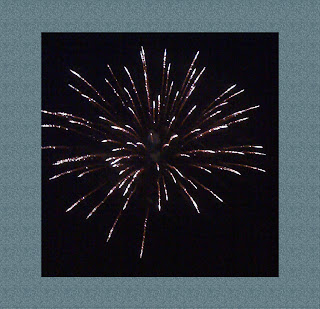 Speaking of fireworks, that is what struck us the most about New Year's Eve in Homer.  There were fireworks going off all the time somewhere.  You could see them or hear them, not only on the beach, but in town as well.  It took us awhile to figure it out, but then we realized that it is light out 24 hours a day in Alaska in the summer so fireworks aren't shot off at the 4th of July.  New Year's Eve becomes the perfect time to shoot them off, and people do so in large numbers.  Doug got this picture of a firework shot off right over our heads with his iphone camera--no high quality, but I'm impressed it even turned out this good!

The weather was perfect:  nearly calm, a crystal clear sky with a full moon and cold enough that we appreciated the fire and hot drinks!   The tide was a -4 so there was an expanse of wet sand for the kids to play on.  From our vantage point they looked like shadows flitting about.  We kept track of the number of shadows, and at one point there were 6 shadows instead of 5.  We yelled, "Who is the extra kid?"  The kids didn't seem to know what we were talking about; they milled around, trying to figure out who the "extra" kid was.  When finally they found him we discovered he was from the party the next bonfire down.  Pretty soon the kid's mom wandered down, infant in arms.  She recognized me from a Christian homeschooling mom's group, so soon we had a great conversation going.  It struck me what a small town this is that you can meet and recognize people you know at night on the beach.  The kids were perfectly comfortable with their wild running-around fun, and were out there for a couple hours before they petered out and collapsed by the fire, grabbing drinks and snacks.

The "boat barn" party was one that we missed--square and contra dancing with a live band and food.  Guess that one is a huge annual tradition in Homer; not publicized formally but apparently open to all.  We also got an invite to a sledding party/bonfire as well.  We didn't feel like being nomads, and the kids were having so much fun we didn't want to break it up so we ended up being on the beach for hours.  This was all after we'd invited some people over for dinner at our place....but we'd invited too late and everyone had their party schedule in place for the night.

The other thing that really struck me was how many people mentioned that they avoid being on the roads after 11:00 on New Year's Eve because of the crazy drivers.  One person described things as "wild".  It made me a little nervous driving home, but curious as well:  are there that many drunk/high drivers on the road and is it really that dangerous??  I don't know, but when I check the news report I'll find out just how bad it was.

It was interesting being in Homer for a New Year's Eve. It wasn't so incredible that I would feel terrible if I missed it, but I can rest assured that there will be plenty to do if we want it!