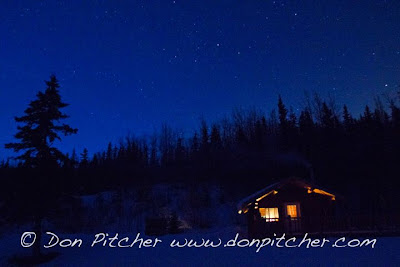 We opted out of spending thousands on plane tickets Outside (the Alaskan term for everywhere else) for spring break, and images of hanging out at home briefly floated through our heads, but with jobs, sports and school our travel time is limited so we decided we needed to do something fun for break. One thing led to another, and pretty soon we had a whole week planned--from a wilderness campout to a fling in the big city!

Our trip started with packing. Our Durango was out of service, so we were going to pull off a camping trip, city trip and ski/snowboard trip with 4 of us and gear packed into a Subaru Outback wagon. We gathered items, condensed, repacked and finally ended up strapping the skis on top of the car and foisting a few items off on our friends who were going to meet us at the Upper Ohmer Lake cabin in the Kenai Wildlife Refuge Area near Skilak Lake. I kept laughing every time I looked at the car, thinking of the family vacation movies where the car is loaded down. That is what we looked like! The kids were squished into the back seat, with gear on their laps and under their feet. Caveat: I personally would not have put them through that level of packing, but I asked both of them if it was worth it to them to be squashed in there like sardines in order to go skiing/snowboarding at Alyeska. Both of them very adamantly said YES! so if they were willing to suffer so much for it, I was willing to go along with it. 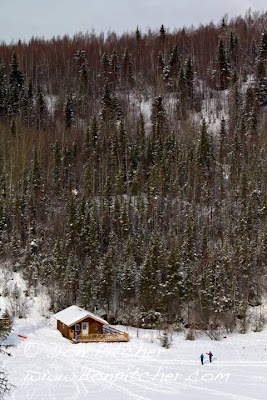 Our first stop on our vacation was the cabin at Upper Ohmer Lake off Skilak Lake Road about 2 hours from our house, heading north past Soldotna. Skilak Lake Road is plowed irregularly in the winter (meaning, it will get plowed sometime, but who knows when?), but it hadn't snowed recently so I figured we wouldn't have trouble getting through. It was hard-packed snow, and was actually substantially faster than in the summer when washboards, potholes and sinkholes slow us down. Eight miles off the Sterling Highway, we pulled into the cabin parking area and began to unload.

It is a .3 mile easy walk back to the cabin. We had a sled that held a cooler and tub perfectly, and it was all downhill, so within 15 minutes we had all our gear and firewood to the cabin and we were ready for some fun. Trails meandered a few different directions so we followed one up the ridge across the lake from the cabin. As long as we stayed on the snowy trail it was firm, but if we stepped off it we plunged crotch-deep in the snow. A couple hours of exploring and we were ready for some mellow activity. We all grabbed our boo 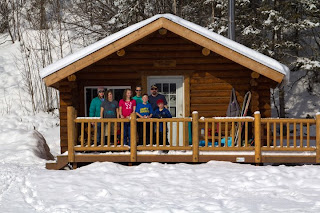 ks and read, ate dinner and then decided to go visit Engineer Lake a few miles away to see the quintzee (snow shelter) that Denver built while on a Boy Scout trip there in January. Aurora ran the mile across Engineer Lake while the rest of us walked it. The quintzee had sunk down so wasn't habitable anymore but it was fun to see the site of Denver's 30 below zero campout. An evening of card games and reading was relaxing. We were feeling pretty luxurious sleeping in a cabin with a woodstove and table--comfy digs.

Next day our friends arrived in the afternoon. One of the advantages of being friends with a professional photographer is getting really good photos of shared events! Our friend Don had fun hiking around looking for good shots, so you're getting the luxury of his awesome photos in my blog for a change!

Karen and I skied up the lake, the kids ran around outside, chopped wood, sledded and had general kid fun. Later, after dinner we built a fire outside and ate s'mores and we got our purple squishy football out and the kids had a blast tackling each other in the snow. We ended the night with card games, gazing out the window at the falling snow.

Next morning we had to get out early to get to Anchorage for a doctor's appointment. It had snowed about 6-8 inches since we'd gotten there and the road hadn't been plowed so it took some attention to stay on the road. All was well till we got to Girdwood and they were shooting down avalanches. It was going to be a 40 minute wait, making us late for the doctor's appointment, so I called and got it rescheduled for the next day. We dropped off Aurora's snowboard at our favorite ski shop to get waxed and had lunch in Girdwood. By time we got back to the Seward Highway all the traffic had been let through but they'd closed the highway again so we ended up having to wait 50 minutes anyways!

The rest of that day was a whirlwind of shopping. It had been awhile since we'd been to Anchorage and had time to shop, and our list had grown long. We were short on space, though, so 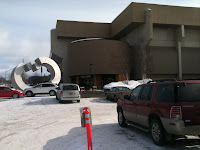 looking at rocketboxes (car-top storage) was first on our list! We ordered one, but that wasn't going to help our space issues for this trip, so the Costco run was a relatively skimpy one.

It was a radical change to go from remote cabin to hotel in the big city, but we adjusted to the luxury of hot showers and 24 hour coffee! Friday our plan was to go to the high school 3A and 4A (big schools) basketball consolation and semi-final games at Sullivan Arena. Douglas and Aurora had a much bigger capacity for that than Denver and I, so we dropped them off and Denver and I continued running errands. Sullivan Arena seats about 8000 fans, and for basketball they had a divider across the gym so two games could be going on at once. 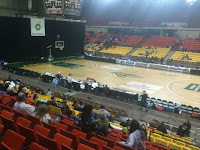 The best game was the boys Wasilla vs. Service Friday night which was very close.

Saturday morning we hauled all our gear out to the car and began the packing process once again. Amazingly, despite many purchases, we had space to spare once everything was packed! We headed up the road to Girdwood, were able to squeeze Aurora's freshly waxed snowboard in and headed to the slopes.

The amount of snow in Girdwood was amazing. Douglas was there a few weeks ago with the Boy Scouts for a ski/snowboard trip, and I hadn't really believed him when he said all the snowbanks were 12 feet high. After we'd gotten a day of skiing in and were waiting for the kids to finish up, we walked around town a little. The snowbanks were up to most second stories--easily double my height in snowbanks in every single yard. The picture here doesn't do justice to the amount of snow, even though those snowbanks are double the height of a car! 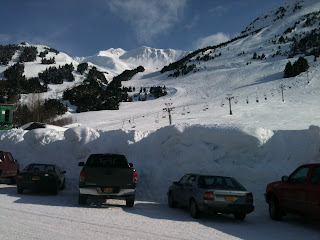 After a day of skiing and snowboarding, we were tired and ready to head home. Five days on the road in a packed vehicle and we were ready to see how much snow had fallen in our absence that needed shoveling (only 3-4 inches!). Longer daylight hours and clear roads made the 4 hour drive home fly by.

One of my friends said the longer she lives in Alaska the more she feels the need to "get out" during spring break. I know the feeling, as sometimes I have an incredible urge to get on a plane and visit "the rest of the world." However, our Alaskan spring break was packed, active and outdoors, so it eased our itch to get out--till summer!