A moose calf recently was found dead outside the college campus in Homer, and my husband mentioned that the moose that hang around the high school have been very lethargic lately. A few days ago a moose calf was laying on the snow right outside the door to our house. Normally I'm pretty nervous walking so close to moose as they can be unpredictable, but this calf was so woebegone, barely lifting its head to look at us as we walked in and out of the house. Four hours later, it was still there when I returned from errands. My next door neighbor had to walk right by it to get to her house, but as she started to walk by, the calf finally got up. I shooed it away so our neighbor could get by and it plodded off.

Today when I came home from a ski a dog was picking at something in our front yard. Curious, I investigated. The baby moose was laid out on the ground, quite dead, and the dog had started eating it. 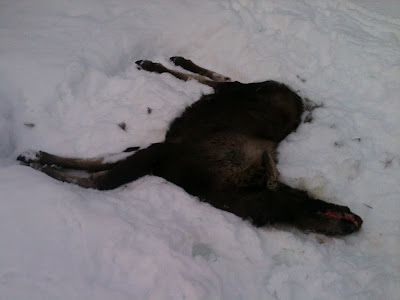 I called the Homer Police, but they don't come out as far as we live so I called the state troopers. They said Fish & Game would come get it in the morning, but I really didn't want that dead moose in our yard till morning, attracting all the loose dogs and eagles around for a feast. Because it died of natural causes, it is not donated to charity, which means the moose list. That was fine with me. The trooper I spoke to called their list and found a trapper who wanted it for animal meat. The interesting part was that the troopers were very specific about the type of vehicle the people who were coming to pick up the moose were driving. Apparently when word gets around that there's a dead moose, people will just show up to grab it.

Two hours later a man in his F-150 pickup showed up to pick up the moose, bringing his son and a friend for muscle power. They tied a rope around the legs and dragged it the 100 feet or so to their pickup and minutes later they were gone. A bigger moose would have had to be cut up before they could even think about moving it, and it could have taken hours of work.

This is a hard, hard winter for the moose. The snow is just so deep. Twice in the past few weeks I have been driving along East End Road and all of a sudden discovered I was driving alongside a moose that was using the roadway as its trail. Luckily, the moose were not inclined to swerve into my vehicle, otherwise we could have had serious trouble. The snow is so high the moose have been able to strip the branches off our trees above their normal winter 'strip line.' Much as I don't like the moose eating our trees, I don't care to see them die of starvation either.

I keep thinking, "If I were a 'true' Alaskan I wouldn't have called the authorities and I'd have just butchered it myself," but we're not. It was so sad to have this dying moose hanging around. I just wanted it gone to someone who would appreciate the meat more than we would. It does remind me of the winter we drove from St. Ignace to Sault Ste. Marie, Michigan, across the Upper Peninsula. We saw hundreds of dead deer on the side of the road that trip. Somehow, it seems different with moose: there are fewer, and we get to know them because they spend the winter hanging out in the neighborhood. But animals do die, and it is a natural process. It just doesn't usually touch this close to home.

Thanks for sharing your experiences. Vicariously, I experience with you.