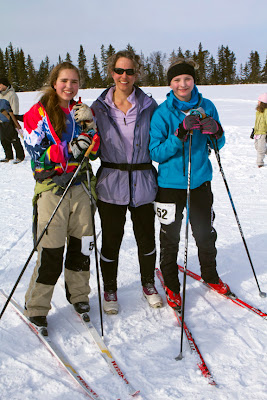 At the end of our 25k ski race! Yeaaa!
A few weeks ago my daughter decided, for some random reason I'm not sure about, that she wanted to do a long ski race. We looked at the Tour de Anchorage, which was last weekend, but after adding up expenses (gas to get there, hotel, food, entry fee @ $75) I decided that was more than we wanted to spend on a ski race. The Homer Ski Marathon was just one week later on March 10. When I suggested that to Aurora, she said, "Yes! I want to do it!"

I have skied the Marathon Trail. It can be something of a wild ride as ski trails go, with a number of vertical downs and vertical ups, as well as long, curvy downs and long, long ups. And it is a point-to-point race, starting at the Lookout Ski trails off Ohlson Mountain Road and going all the way to the DOT trailhead on the Sterling Highway as you drive into Homer. For a few days (or more!) I pondered. I wasn't sure Aurora could do it, or that I wanted her to do it. Finally, I emailed Megan Spurkland, the coach of the Homer Women's Nordic. She'd worked with Aurora during the middle school ski season, and also at Wednesday night circuit training at the Bay Club. I asked her what she thought, and she was confident Aurora could do it.

Decision made, we went into action. Aurora was planning to classical it, because her favorite style right now is classic skiing. I wasn't comfortable with her skiing the race by herself, so I signed myself up (2 weeks of training is plenty, right??!!) Somehow one of her good friends decided she wanted to do the Ski Marathon too. As Aurora and I started training, going out for long classical skis after school, Aurora came to the conclusion she didn't want to classical it after all; she was going to skate it. I had already decided to classical it, and with only 2 weeks of training (my previous month's exercise was maybe a couple mellow skis, walks, snowshoes, random games of racquetball, perhaps a swim....you get the idea.) I knew I was not in skate skiing condition. By this time I was taking both Aurora and her friend Aziza out for skis after school, and just did skating with them most times. Snow conditions were awesome, with a huge base, and not too much fresh snow so it was actually groomed, and weather was in the 20's.

The day I did the whole outside of Baycrest Loop, 16 kilometers, classical, was the day I knew I could finish the Ski Marathon. The day I skated the Baycrest Loop, I knew I was in good enough shape to actually have fun on this race. Those two skis were my confidence builders (if I can go 16k, what's another 9k, especially since the last 5k would be downhill or flat?!), and they were also the longest skis I'd done since I was in high school.

Pre-race day arrived, and we planned what clothes we would wear (stay warm since it was supposed to be windy), what food we would bring, who would carry water, and coordination of rides. I thought I would be nervous, but was not. I was just eager. I was more nervous about getting to the race on time and staying warm on the race than actually racing it. We also got the girls skis waxed. I opted not to wax my skis. I had 2 weeks worth of kick wax on, which I had added to each time I'd gone out. It had great kick. I was afraid that if I took it all off, glide waxed them and then put new kick wax on that the kick wax would wear off by race's end, and that would have been a nightmare, not having enough kickwax on. So I went sans waxing. 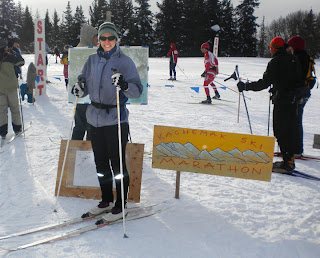 Race day we dropped our vehicle at the DOT trailhead, and Aziza's mom drove us up to the Lookout Trailhead. We could have taken the bus up that they had provided, but we appreciated the luxury of our own vehicle! The registration table took about 30 seconds to sign one additional waiver and get our bib. I puzzled over where to pin my bib on. Front? Back? The girls opted for their leg, which was a good choice in case they decided to take layers off. I opted for my jacket, which I could not imagine taking off! It was about 10 degrees with an icy windy, and I knew many parts of the trail were on high, open, exposed areas.

The race start was casual. Everyone just grouped up at the hayfields start, on an honor basis as to who was faster in the front. I and another guy were the only classical skiers in the group that I saw. An hour earlier, at 9:30 a.m., people who didn't want to race had started skiing the 'tour' option. They were not officially timed, and it was only for the 25k (not the 42k). This man from Eagle River and I stayed together for the first 8 or 9 kilometers until just past the Crossman Ridge Aid station, when he took off.

Aurora and Aziza were just in front of me from the start, always in sight. When we started some of the long climbs, somewhere around the 5k mark, I passed them and stayed ahead of them the rest of the race. Come to find out they were fairly close behind me the entire race, but I never saw them again till I crossed the finish line and Aziza's dad had his camera trained on, not me, but someone behind me. It was the girls, finishing about 15 seconds after me. But I get ahead of myself.

The vertical up and vertical down hills that cut through gullies did not bother me. I like that kind of hill. The long uphills were not too bad for me because I was classicalling and could shuffle. I had nothing to prove, besides to finish, and so wasn't in a contest to have awesome technique. I could go as slow as I wanted. That being said, for my conditioning level, I pushed myself the whole race. I kept up a steady pace, always at that max of what I could handle without getting too tired and having to slow way down. I admit, I bit it on two curvy downhills. I was getting a little bit woozy and not quite as sharp mentally or physically. I'd taken 2 little cups of water at the first aid station, and when I started feeling out of it, I drank from my waterbottle I was carrying and I pulled out the almond bark (white chocolate with almonds) that Denver had made the night before and nibbled on it. I'd eaten half of it when I got to the top of the only marked Caution! hill of the whole trail when I dropped it. There was no way I was going to stop and pick it up, but it did it's job, and the timing was good because shortly thereafter I arrived at the bottom of The Kill Hill (different parts of the trail are labeled!), which is climbing Diamond Ridge up to Diamond Ridge Road.

I knew once I crossed Diamond Ridge Road it was an easy glide in to the finish, so my goal was just to get to that point. I was hoping for a sub-3 hour time. At the Diamond Ridge aid station I drank a cup of juice, which was perfect. Again, I barely stopped. I was feeling good. Tired, but still had plenty left. The ski around Sunset Loop, down Farside to College Way and then Raven's Loop to the finish is just a blast--my absolute favorite. It is so fast and curvy. I was really regretting not having my skating skis on at this point as that would have made it even faster and funner. 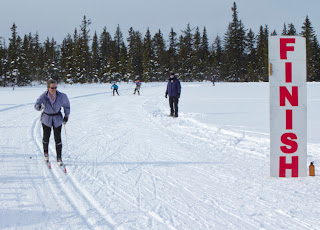 The final kilometer to the finish line was so hard! I was really tired at that point, but not so tired that once I got onto the flats that I couldn't pull out some nice classical technique. It was sweet to cross the finish line to cheers of friends, and then I was so surprised to look around and find Aurora and Aziza blasting in to the finish line as well! All my worries about them dissolved (mom worries, like "Did their pole break?" or "Did they crash?" or "Did they hit the wall?") and I was so proud of them! We'd done the 25 kilometer course in 2 hours and 30 minutes. While I know plenty of people who skied the 42k course finished it before us, I suspect they trained a whole lot more than I did! I was (am!) proud of my finish. That was by far my longest ski in the past 25 years, since I skied the 39 kilometer Korteloppet (shorter version of the Birkebeiner in Wisconsin). I have probably only skied 2 1/2 hours two other times in my life. 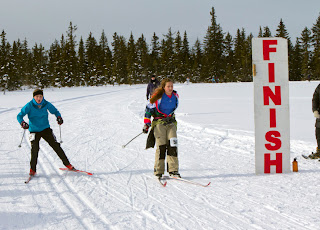 The girls had a good experience. They are very closely matched when it comes to pace so while Aurora led the whole way, Aziza said her pace was just right. It wouldn't have been as fun to do it alone, especially the first time. They were impressed at how well marked the course was, especially with the kilometer markings. It was a really good experience for them, and it will be a memory that sticks with them for a long time.

It is now the day after. There is a sense of unreality of having completed that race, and having done it so much better than I expected to (I was shooting for the 3-4 hour range). And there is an awesome sense of pride in the girls for doing it as well. I saw maybe 10 kids under the age of 18 doing the race, and many of those were high schoolers.

Next time (and there WILL be a next time!) I will let Aurora dress not-quite-so warmly (she had a jacket tied around her waist the whole time, took off her neckwarmer, all very clunky). I won't take food next time or just some chocolate. I will for sure take a waterbottle again, and I would probably dress the same. I would probably classical it again, though I know if I trained for it I would be tempted to skate it. Conditions might be very different another year, so I can't say for sure about all these things. And next year we'll make it to the after-party at Alice's Champagne Palace, where I hear we missed drawings for $1000 worth of cool stuff!
Thanks, Don Pitcher, for the finish line photos!