I cringed when I noticed my last blog post was in December, but we live exceedingly boring lives most of the school year, stuck in Homer (or the road between Homer and Anchorage!) by our jobs, kids' sports and activities.  And after nearly six years of living here, everything here seems commonplace and the norm.  However exotic one's locale, it becomes home after awhile, with all the foibles that come with home:  not noticing it quite as much anymore, and wanting to get away.

Last weekend we had a Saturday free and in Homer with no plans--as a family, the first since Christmas break.  Of course, we couldn't fritter away a perfectly good day by doing nothing so we came up with a plan that ended up working out well:  go snowmachining with my aunt and uncle.  My uncle had a brand new snowmachine he was itching to try out, and he'd discovered some new places to go the weekend before as he'd followed the progress of his daughter Kelli and her husband Todd as they did the 100 kilometer bike/ski/hike Homer Epic based out of Homer.  Serendipity! 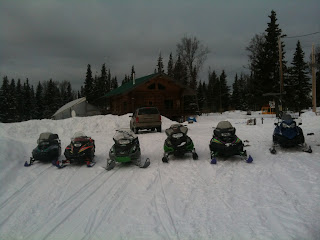 The preparation was much longer for my uncle than it was for us.  We just drove to Ninilchik and donned our gear.  My uncle spent hours getting all the machines gassed up, treads aligned, oiled and whatever else needed to be done.

The day was warm--mid 30's, but overcast, which was a little disappointing as the sunshine helps see the definition of the snow better, and on cloudy days the snow can be so flat it is difficult to see.

We took the trail to Ninilchik Dome, which is a rough, bumpy, meandering trail with a few bare spots, as well as a crew who had explosives lined up along the trail--something to do with exploring for gas.  That was a bit weird, and I made very sure not to run too close to the wires connecting all the charges.

Past the Ninilchik Dome (which is just a hill that looks like a dome and is a visual landmark for the area), we turned onto a wider, smoother trail.  A few inches of fresh snow had fallen so we were breaking fresh snow, which was fun.

One thing that has always puzzled me is how people know where to go out there on the trails.  There were a couple clues.  In one place we came across a sign that said, "meeting tree."  I assume it is just that:  a marker that people know and can agree to meet at.
Shortly after the meeting tree, we came to another sign: 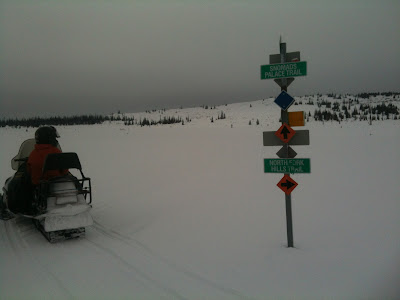 We came across several of these in our day of snowmachining, though they were all on the western (Homer) side of the Kenai Peninsula.  I don't recall seeing signs for the Ninilchik Dome trail, though I could have missed them.

Our goal was The Palace.  That is, the Snomads Palace, a building where snowmachiners can stop and rest, eat, have a pit stop or even stay overnight.  In the 45 or so years my uncle has lived on the Peninsula, he'd never known about it, and the discovery had really excited him--so much so he'd driven to Homer for a Snomads meeting a few days before.  He thought it was the neatest thing.

The day had been overcast but as we headed to the Palace, the snow became flat and we could no long see the definition of the snow.  It took more concentration to watch the trail, but it was an area where we stayed on the trail as opposed to ripping up new snow all over the place, so it was just a matter of following along.  I was so ready for the lunch break when we got to the Palace.  It had taken us about 2 hours to get there--26 miles I think my odometer said.  We'd gone from 10-40 mph, and my uncle stopped regularly to check on us all and make sure we were doing okay.


Inside the Palace was 4 tables with chairs, a booth, a propane stove and wood stove, sink (no running water, just brown water out) and upstairs in the loft a couch and sleeping pads.  Our lunch was a simple hot dog wraps, cider, cocoa and oranges.  The propane stove was a nice feature, and we started a fire in the stove to take an edge off the chill.  As I was gazing out the wall of windows, I thought to myself that I was looking at the back of Bald Mountain that I go crust skiing on in the spring.  My uncle argued with me, but I was pretty sure I was right (I was as I discovered later).  Two outhouses rounded out the facilities.

After lunch, we contemplated our plan of action.  I had hoped to make the loop that goes from McNeil Canyon School, out to Caribou Lake and back around via the Eagle Flats.  It would have been a long day--longer than we were up for--so we nixed that plan.  Instead we took the trail to McNeil School, which was neat for me because I ski in that area, and for crust skiing it is really nice to have a lay of the land.

At McNeil we turned around and headed back to Ninilchik.  By then the sun was out, the Kenai Mountains were peeking through (though now they were behind us), it was warmer and visibility was good.  We made good time back, for a total jaunt of 5 1/2 hours, which maxed us out.  The smell of fuel, the whine and roar of the machines, and the constant attention to driving had dulled the edge of excitement and joy of the morning when we'd gloried in the freedom and speed of the machines.  We joke that we only need to go snowmachining once a year to get our 'fix,' and I think it's true.  It's something different to do, but not something we love passionately.


On another note, nearly six years in Alaska has taught me that there are different brands of Alaskans, and I am never going to be an Alaskan like my aunt and uncle.  I barley like snowmachining and 4-wheeling, I don't like to hunt or fish, and I'm not particularly fond of horses.  When I snowmachine and run over a tree, I cringe, and when I go 4-wheeling and create big ruts in the earth, I am embarrassed to be contributing to that eyesore.  Much fishing requires boats, much hunting requires 4-wheelers or horses, or even a plane to get there.  None of those things fills me with joy or enthusiasm.  We came, we tried, and we've discovered that's just not "us".  Some people might embrace that lifestyle.  I've finally come to the realization that we won't.

Does that mean Alaska is not the right place for us?  I don't think so.  Many people in Alaska now don't do those stereotypical "Alaskan" things.  But we do other things that my Alaskan relatives do not:  we've explored hiking trails that they've driven by all their lives and didn't even realize were there.  We pick and berries that they didn't know the names of, much less how to eat them.  We mountain bike and backpack.  We appreciate the beautiful scenery, love the mountains and water, and we try to co-exist equably with our environment--not going overboard in subsistence living, but still growing much of our own food and harvesting wild edibles.  I'm coming to an acceptance of who we are as Alaskans, and feeling less obligated to do or be certain things just because it is a 'traditional' Alaskan activity.  So we are forging our own lives and identities here, which is a neat thing to do in The Last Frontier!

My parents used to live up in Kenai when I was little. I remember sometimes we would go down to Homer, and ride our snow machines out to Caribou Lake. We would occasionally ride up by Diamond Ridge as well. Your blog post makes me miss it!
Claudia Rosenburg | http://www.allseasonshonda.net/snowmobiles