Last August Doug got pushki when he mowed the lawn at his school; once again pushki has struck it's ugly head in our household, this time with Aurora.

On Monday Doug and the kids mowed the lawn at Razdolna School, but when they were done they came right home and all took showers and we washed their clothes. It appeared we had nipped the problem in the bud as none of them broke out. This afternoon I noticed a red welt on Aurora's arm. It looked like a burn, but she said it didn't hurt or itch, but I suspected pushki. Within hours we watched the progression as the blister swelled and swelled, to what you see in this picture. It seemed like a delayed response from Monday, until Doug remembered that he mowed our lawn yesterday and he ran over a few small pushki (also known as cow's parsnip). The kids raked the whole lawn today and deposited the clippings in my compost bin. Suddenly it all became clear, and I was sick 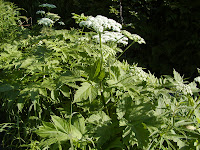 when I realized that Aurora had spent the entire day in the sunshine.

Pushki is photosensitive, which means it gets worse in the sunlight. When contact is made, the best thing to do is take a shower and wash off the fluid as quickly as possible. Unfortunately, we were in town when we noticed it, and it was hours before we were home and Aurora had access to a shower. There appears to be nothing one can do about it once contracted, besides perhaps take the homeopathic remedy, causticum, a pill that some say takes care of the problem. So now she is showered, we'll head back to town tomorrow and get her started on causticum, and we'll see how our next 5 days go, since we are planning a training backpacking trip.

Thank-you for your blog! I was at my parent's place in Albany, NY, and saw some cow parsnip growing in with their flowers. We have a plant called Chervil here in Vermont that we routinely weed from road sides, and so I thought the Cow Parsnip might be similar. A couple of days later I got the same blisters you show on your picture of you daughter. Nasty things. I also have marks that look like cuts with blisters! Revenge of the plants, I guess.

I thought at first that it was potent non-itchy poison ivy, but your blog confirms what it's from.

I hope that your daughter's welts have disappeared and that your backpacking trip is a success.

Melissa,
My daughter's arm is now covered with scars--the blisters went away within a few days. I am hoping that those scars disappear eventually too, because they look like a bunch of bruises.

I agree-a very nasty plant! Unfortunately, up here it is spreading rapidly and is everywhere now!

The backpacking trip went well (see "Chilkoot Trail" in my archive of past entries.

When I lived in AK as a teenager I got Pushki very badly when I removed a hillside of this plant with a stick! I didn't know it was harmful, obviously. I was wearing shorts and a teeshirt and I layed out in the sun afterward. I was covered with quarter-sized blisters for the next week or so, all over my arms and legs. The good news, however, is that there is no scarring. Hope this info is helpful.

there is a remedy
I was told to use applecider vinegar and to wash with this imediatedly when homme..

on another note I have a friend highly allergic to poison ivy and she srays and cleans with original windex window cleaner.. It works for doing immediate after exposure (not to use with open rash) it breaks down the oils and prevents spreading of poison ivy... Might be useful on pushkie like apple cider... I did not like getting puskie the first time...took weeks to get rid of as that time I did not know about apple cider..

Have you tried the apple cider vinegar method? I know there are other homeopathic remedies out there...my blog readers may appreciate having another method to try.

Just washing with soap and water and avoiding sunlight can help prevent it from being so bad. I've also heard of applying Silvadine for burns works, though it needs to be prescribed.

I did try cider vinegar and it helped immensly

Usually I get all the worst results from contact with Pushki, Heracleum maximum. But! Now I slather on Aloe Vera from my handy window sill potted plant. It's like MAGIC!
Best results from immediate washing and then slathering it on and letting the Aloe Vera dry. But if you don't realize you got "burned", then apply as soon as you notice the itching, swelling. Apply it thickly. Hold still till it dries....it forms a thin film. Next day there's barely a pink spot & swelling, itching is gone.
I grew up with bouts of pushki burns here in Kodiak, Alaska and never thought to try Aloe Vera till this year.

I have tried Aloe Vera before, but I did not slather it on (just dabbed it), and I did not let it dry. I thought it helped somewhat--made it less bad than it could have been. Did you wash it with soap and water before putting Aloe Vera on? Just curious...

I showered and washed well after a bike rid yesterday on Johnson Pass trail. One blister this morning. I'll try our aloe plant. I really thought that washing well with soap and water would keep this from happening, and it was overcast all day yesterday. Of course, UV does get through clouds. FWIW, I stop frequently at streams to wash off, but I know without soap that doesn't help much. I have read that baking soda can also help. Does anyone know if this is true - have you tried it and it worked? Thanks.

I haven't tried baking soda...I'll put it on my "to try" list. Amazingly I hike and bike through pushki quite a bit in shorts on sunny days and rarely actually get blisters and occasionally a sore.
Seems like more of a problem when hacking the plants, mowing them or otherwise breaking them open and getting slathered with the juices. Just brushing against the plants along the trail doesn't seem to cause too many problems. However, that could also be my skin. I recall my mom pulling poison ivy when I was a kid, before she knew what poison ivy was. She never got a rash while our neighbor got terribly sick when his poison ivy spread internally. So I think there are indivdual differences here too...
But if anyone else has tried baking soda, chime in!

Hey Michelle nice blog! We love visiting Homer (especially the Farmers Market) and it's nice to find a Homer-based blog. I live with my family in the Aleutian Islands (Sand Point) and we have found a remedy out here that clears up the pushki rash overnight! One of my friends even said it was "miraculous"...works on everyone from little girls to great big grown guys.

I've always been a fan of this particular facial mask, and I just recently found out from a friend how well it works for poison ivy. I'm sending my brother in Arkansas some because he is severely allergic to that plant! Well, the next day my friend's granddaughter had a bad case of pushki rash and I told her we should try the mask on it. BOOM! Worked overnight. Next our friend who works the the Borough office here had a pushki rash and of course word gets around in Bush Alaska-he had to have a sample. His rash was worse, but it significantly cleared up a lot of it. His co-workers were all asking about what he used because it was such a noticeable change! I have not blogged about this yet myself, but I am happy to share this tidbit with you and your readers. If anyone wants to know more about this remedy, just email me! candicerobb@waysouthofalaska.com