Every time we've driven to Seward I've seen the Carter Lake Trailhead sign and said, "I want to hike that trail."  It was only a few hundred yards up the road from the Johnson Pass Trailhead, so after we were done biking I talked to family into hiking.  We already had our hydration packs full of water and snacks and a pack full of extra clothes, so it was a simple matter of ditching the helmets and adding bug spray and hats. 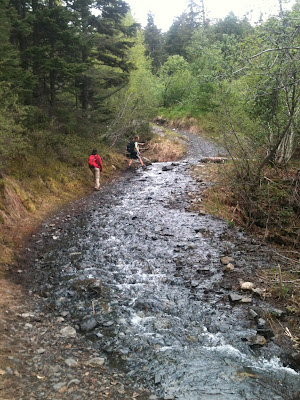 The trailhead sign said it was 3.3 miles to Carter Lake, steeply uphill the first 1 1/2 miles, and mountain bikes not recommended.  It started off as a wide, smooth trail so we kept saying, "Why don't they recommend mountain bikes?  This would be a blast to bike down!"  The higher we got the rougher the trail.  It narrowed, got rocky, the trail was a streambed in places, there were tricky stream crossings that required agility and great leaps, and as we got higher there was the mud and then snow a couple feet deep).

In the picture with snow we are probably at about 1 1/2 miles, just where it was leveling out.  Douglas and I had just worn tennis shoes (dumb!) so our feet were soaked and we were not prepared to hike through snow.  Up there, just 1000 feet higher than the road, the pushki was just coming out of the ground, whereas down at the bottom the pushki was at least 2 feet high already.  It struck me, as it often does, how you can walk from one climate to another, and we did so many times throughout the week.

This trail can actually be a point to point hike from Carter Lake, along Crescent Lake and then descending to the Crescent Creek Trailhead over in Cooper Landing, though it is a rough trail and "not recommended for children, horse or bike" due to the rough trail and tall grasses.  Of course I want to try it someday! 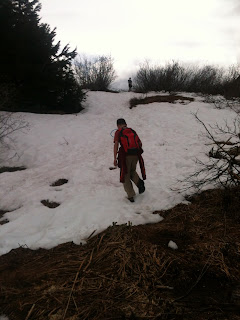 Like the Johnson Pass bike ride we'd just done, I was disappointed to turn back without reaching our goal (Carter Lake), but we simply were not prepared for it.  And while we'd only biked 7.5 miles, we were still tired from that.  So at the top of the rise pictured here we stopped, had a snack, let Aurora run ahead a little ways to see what she could see, and then headed down.  Gee, down is so much easier!  The kids actually exclaimed on the way (Note:  ours are not 'exclaiming' type kids!) that "This is fun!" about the trail.  It kind of reminded me of an obstacle course, as we were crossing logs over streams, leaping the streams, picking our way around bogs or snow or whatever.  It kept it interesting, and obviously the kids were enjoying themselves.  Partly it was an easy enough hike that they could actually breathe, which I can't say about the other hikes we did during this vacation!


I don't usually take pictures of the trailhead signs, but on a whim decided to for this trail. If you like it, comment and let me know and I will do so more often. 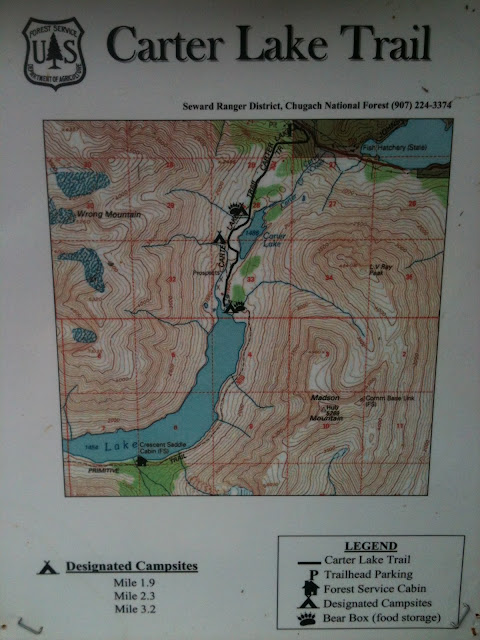 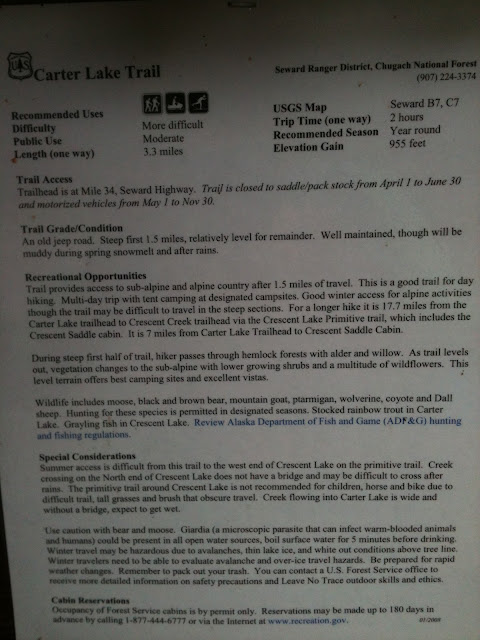 Thanks for the information. My family, young kids too, have hiked this many times but this year maybe not. The snow is recking our trekking plans!