An Inside Look at Cooper Landing

Our original plan for the summer included a road trip to the Lower 48 northwest, but rising gas prices made us think twice.  When we started looking at how long it takes to get to, say, Montana, and our timeframe of 3 weeks, we decided we didn't want to be in the car that much.  Denver recently started working on his Cycling Merit Badge for Boy Scouts so we'd recently gotten back into biking.  From the camping trip Denver and I took a few weeks earlier, I had the bright idea of basing out of Cooper Landing and biking many of the great trails that are within 10-15 minutes of town.  After running the idea by the family, we decided we would camp, bike, hike and raft in the Cooper Landing area, and part of the deal was trying every restaurant in town (there are 3).  This blog post will be an overview of some of the amenities and features of Cooper Landing:  restaurants, lodging, convenience stores and other miscellaneous places.

Lodging:
There are 6 public (National Forest Service and state) campgrounds in Cooper Landing:  Russian River Ferry, Russian River, Cooper Creek North and South, Quartz Creek and Crescent Creek.  The Russian River Campground was full with a waiting list when we came into town on Tuesday afternoon in mid-June, which worried me.  We pressed on to the next campground along the Sterling Highway from the south, Cooper Creek South.  Of 25 or so sites, only a handful were available for 3 days, and none were available starting on Friday since they are on a reservation basis, so we chose a site that we could stay at for 3 nights. 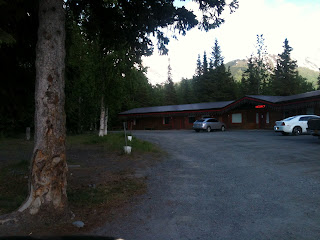 Come Friday we headed over to Quartz Creek Campground, but they were already full on Friday morning.  Crescent Creek still had sites available, but that was 3 miles down a very bumpy, rutted road and we had no desire to drive up and down that multiple times a day.  We opted to check out the Sunrise Inn Motel on the Sterling Highway at the Quartz Creek turnoff.  It was $130/night for 3 beds, 4 people, which is pretty much the going rate for the other motel and many of the local cabins for rent.  We were very pleased with this motel:  it was the nicest motel I've ever stayed in in my life (motels tend to be old and run-down or cheap).  It was nicely decorated, smelled nice, was spacious and had a great shower (important after camping!).

After a weekend of luxury watching TV and charging all our various electronic devices, we headed over to the Quartz Creek Campground just down the road from the motel.  It had plenty of spots open on Sunday morning, though we would find that nearly every spot would be taken by evening.  I would say 95% of all sites were occupied by RV's, campers and fifth wheels.  If there was a tent, it was a supplement to the camper.  This campground was like a village in the country, with lots of people, lots of traffic, lots of noise, which contrasted with Cooper Creek South where there was some traffic and it was very quiet, partly because it was smaller but the sites were very private there.  The kids liked Quartz Creek more because it was large enough to go biking and exploring in.

Restaurants:
We checked out Sunrise Inn Cafe first.  It is part of the Sunrise Inn Motel on the corner of Quartz Creek Road and the Sterling Highway.  It had good food (not raving good, but solidly good), comfortable service, reasonable prices and a homestyle restaurant atmosphere sporting an amazing collection of salt and pepper shakers.  We went there for both a dinner and breakfast and we would gladly go there again.

I'm going to mention Summit Lake Lodge's restaurants (pizzaria/ice cream/espresso and a sit-down) here even though they are about 15 minutes from Cooper Landing towards Anchorage on the Seward Highway.  We went there 3 times in a week.  The pizza there would rate #1 for us if it was in Homer--we were totally impressed with it.  The sit-down restaurant had a very nice, open atmosphere, felt new, and had $10-11 burgers.  We all got burgers for lunch the day we were there and we were all pleased with them.  Service was great, strawberry lemonade was divine, and even the fries were tasty.

Sackett's was our next night and the pizza was such a disappointment after Summit Lake Lodge's.  My pulled pork sandwich was good.  The seating was a little odd (three different rooms, some tables, some picnic table).  The building looks like it is 3 different restaurants so I think each "room" represents a different restaurant.  I wouldn't put this one on my go-back-to list.

The Kingfisher Roadhouse was the brunt of our jokes all week.  We put it off because it looks like a dump from the outside/road side.  However, we finally went online and all the reviews said the food was excellent or very good, so Douglas and I went there for Father's Day dinner.  The food is indeed very good, but it is the atmosphere that enchanted me.  It was typical Alaskan with room after room added on helter skelter, but it was so artfully and tastefully decorated that it was fascinating.  The porch had a clear corrugated plastic ceiling which let in a lot of light, and of course it sounds awful but it "fit".  The burgers were $16, and were the cheapest entrees on the menu, so prices were a bit higher than your normal fare.  I would happily go there again, though sans kids.

Convenience Stores:
It cracks me up that I would even write about the convenience stores, but there were only 5 so we could actually check them all out and in spending 10 days in town we knew which one to get what (particularly desserts!!).

Wildman's appears to be the most popular store in town.  It has nice restrooms, showers, a laundromat, ice cream, hot soups and food, espresso, a liquor store and the usual convenience store sundries and snacks.  It has a porch where people were always hanging out, and the inside felt clean and spacious.

Hamilton's was crowded, didn't have a great selection of items and the sales clerk wasn't very friendly, so even though they had a laundromat and gas as well, we wouldn't want to go back there unless we had to.

Almost across the street from Hamilton's was Cooper Landing Grocery (not sure about the name!) and it was our second favorite, with ice cream, pizza (we didn't try but heard it takes a long time), more groceries than any other store in town (not saying much) and souvenirs.

Gwinn's used to have a resturant but turned that section into a store so it seemed a little barren.  It was dark and didn't have much.

Right next door to Gwinn's was another store...not sure the name...and it was heavy on the fishing supplies.  Doug said they had a really good selection of snacks there! 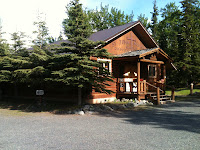 The Catholic church, St. John Neumann, has some very nice grounds for a small church.  They have a shrine for handicapped people, outdoor stations of the cross that is handicapped accessible, the church, a rectory/social hall, another tiny building that might be storage or an office, graves scattered about and a hiking path up a 200-300 foot ridge to a cross overlook.  We found this a very peaceful, inviting place and returned a number of times during our vacation, including for church on Sunday.  Ironically, mass was presided by a priest from Seward, a local deacon and a archdiocesan seminary student!

In searching for the Slaughter Trail, which we'd heard about and saw on one map of Cooper Landing, we stopped at the Cooper Landing Cemetery, thinking the trail from the parking lot might be the trail we were looking for.  It was not, but the steep trail did lead to the most unusual cemetery I've ever seen.  The graves were dug in the woods here and there.  Footpaths wound randomly throughout the area, leading from one site to the next.  All were very natural, with the landscape hardly disturbed in this heavily treed area.  It felt like...a park.  As we were exploring it, gunshots started going off at close range.  It was disconcerting until we remembered that the local rifle range was right next door!  What kind of sense of humor must a community have to put the cemetery right next door to the shooting range??!!

I'll be honest:  Cooper Landing has never once raised a blip on my radar of "places to go" before.  However, I am smitten.  Although most people come for the fishing, we found 6 easy to challenging mountain biking trails within minutes of Cooper Landing, plus mountains to climb and trails to hike.  I would say we thoroughly explored this little town that boasts 235 or so year-round residents.  Next time we come to visit we will make sure we have reservations to the campground of choice, particularly if it is a weekend.  Besides that, it was 10 days of one of the best vacations I have been on:  enjoying the amazing outdoors of Alaska!

Note:  I will blog about each of the trails we went on separately to avoid one overwhelmingly long blog post!

So thanks for your review of my the village I now call home. Give me some time, and we'll get (formerly Hamilton's) Grizzly Ridge on your radar. I promise we'll at least be friendly.

Looking forward to a new place to check out next summer...or when traveling through to Anchorage. Cooper Landing is the halfway point from Homer to ANC so we nearly always stop there for a snack/bathroom break!

Gwin's Lodge was remodeled and the restaurant re-opened July 2012 with new owners, Gwin's Resorts LLC. Check out Gwin's Lodge on Facebook and TripAdvisor; we have gotten excellent reviews! Cabins have been upgraded and have new Serta Presidential mattresses, new linen and towels. You can check out the cabins and book online at GwinsLodge.com . Thank you! Keith

I noticed they have been open all winter and have been meaning to get up there and stay at the cabins. I hadn't been inside but could tell from the outside there were some positive changes going on there.