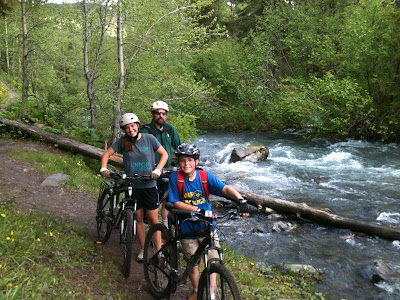 The Crescent Creek Trail, found 3.4 miles off the Sterling Highway in Cooper Landing down Quartz Creek Road (very bumpy!!) is rated an easy trail, so we did this on a Sunday late afternoon.  That morning Aurora had done a 10 mile run on that road, and Douglas and Denver had biked it to get Aurora an accurate mileage reading, so they'd already biked 7 miles.  We decided to just bike from the Quartz Creek Campground, where we were now camping after a weekend in the Sunrise Inn Motel.  Between all that early exercise, combined with the added miles from the campground, this was the family's least-favorite bike of our entire week, though not mine since I was fresh and rarin' to go, having stayed back and done laundry and packed up our stuff in the motel.

The road from the campground to the trailhead is a very gradual uphill--so gradual you wouldn't know it until you turn around and FLY back down.  I was expecting the Crescent Creek Trail to be...easy...like it was rated, but it was NOT easy for mountain biking.  I would say the first mile was all uphill, with hairpin turns, and some roots and rocks to hop on the trail.  Then the trail leveled out into a sweet, comfortably wide (couple feet), flat, smooth trail for awhile, albeit with a dropoff to our right.  I'm getting used to ignoring those dropoffs!

Douglas kept getting way behind us, even on the flat parts, which was weird.  Finally we stopped and waited and discovered he was having serious shifting problems.  I was envisioning our whole biking trip derailed  because of derailleur issues (pun intended!).  Douglas was frustrated but game to keep going, so we got going again, but then started meeting other bikers coming from the other direction.  The trail had narrowed and gotten very rocky by this time, so it was impossible to bike past.  The other bikers got off the trail and we dismounted and walked by them.

Shortly after that Douglas ended up going over his handlebars into the brush in a spectacular fall that we missed, and then Denver started sliding down a shale slope towards the rushing river when the trail threaded its way between an embankment up on one side and shale slope to the river on the other.  Even our "up for anything" Aurora was tired and had no energy and wanted to turn back.  We'd only gone about 3 miles from the trailhead, 6 miles from the campground.  I was disappointed, but like I mentioned earlier in the week, I'd begun to recognize signs of fatigue, and biking on these trails is just too dangerous to be biking very tired (along with the kids' inexperience).  Just after the picture above, taken along Crescent Creek, we turned back.  It would have been 6+ miles to reach Crescent Lake, which was my goal, but no one but me was up for it.

The ride back was stunningly fast.  Although Denver led our biking all week and set the pace, for the downhill we let Aurora and Douglas go ahead because their weight would propel them downhill faster than Denver.  It was challenging going that fast and making split-second judgements about just how fast we could take the hairpin turns.  Denver biffed it on one, taking it a bit too fast, but after that he had better judgement about it.  It is more challenging for the person following because they cannot see the trail ahead and basically have to follow the path the person ahead chooses.  I was impressed with Denver's choices, and although he is a pretty conservative rider, he still went quite fast.  It was fun and I got my share of adrenaline rush, despite disappointment with turning back.

This is the one ride of our entire week I am just itching to go and complete.  I have wanted to do it for years--hike it, bike it, whatever--and I was really hoping this would be the day to do it.  Ah well.  Gives us a great excuse to return!  I can't wait!