So we decided to do the Russian River Falls and Lake trail for our first foray into mountain biking in Alaska, probably because we've hiked it (partly anyways) before and were familiar with it, plus it was close to the Cooper Creek Campground.  So we geared up:  hydration packs with snacks and water, a backpack full of extra clothes, bug dope, and bike repair stuff, waterbottles on the holders on the bikes, helmets, biking gloves, biking shorts (just for Douglas and I).....we hoped we had it all.  Even in our mountain biking days back in college we'd never done "big" trips like this--off road, in the wilderness, with few people around, for many hours.  So it was a leap into the unknown for us--and we didn't know how the kids would do as we'd never done stuff like this when we were 12 and 14 years old....

It rained the entire previous night and that morning right up to the time we left the campground, so we were curious how muddy the trail would be.  The 2-something mile trail from the Russian River Campground trailhead to the falls is graveled with gentle hills (albeit one long one!) so it was a fun, comfortable ride. 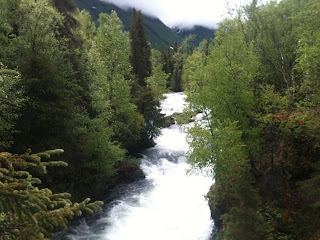 The Russian River Falls are awesome, but even cooler is seeing the salmon jumping up the falls!  We  saw one jump 10 feet.  It is amazing what those fish can do! 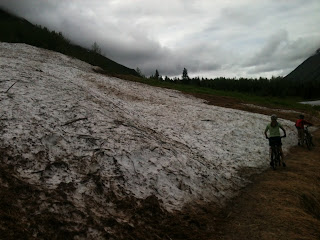 After leaving the falls we biked back up the trail 1/2 mile to the turnoff to the Russian Lakes trail.  We crossed the bridge and continued on the easy, gravel trail.  We took the turn-off to Barber Cabin along the Lower Russian Lake, intending to stop and get a snack there and rest.  In the picture above an avalanche had come down to the lake and we were able to squeeze by between the snow and the lake along that trail.  The cabin is the same as when we stayed there 3 March's ago.  No one was in it yet though the sign said it was occupied.  We had a quick bite and turned around to head back about a mile to the turnoff to the Upper Russian Lake trail (all clearly marked). 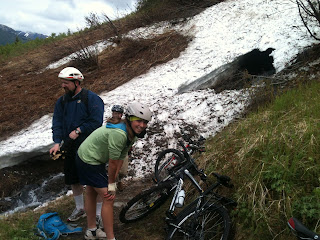 As soon as we turned onto the Upper Russian Lakes trail things got interesting.  First we came across the avalanche we'd met at the bottom by the lake, except here there was a drop-off into the stream and a steep snow slope to cross.  We put Aurora on the far side, me standing in the stream (balanced on rocks for dry feet!), and Denver shoved the bikes across the snow to me as Douglas handed the bikes to him.  I would carry the bike partway across the stream where Aurora would meet me and carry them the rest of the way.

In addition, the trail became narrow with large rocks poking out instead of the smooth gravel.  So what was a relaxing ride in the woods with mild exercise became strenuous quickly.  It was a great deal of uphill, though gradual.  The alpine meadows full of wildflowers were amazing!  My only regret is that we were going so fast and had to keep our eyes on the trail so I couldn't look around much.  Every time I tried, I'd practically bike off the trail, which was a dangerous thing to do because the downhill side of the trail was steep downhills!  Many times when I would get nervous at the dropoffs I would mentally remind myself to just stay focused on the trail.  I really had to trust that the kids could handle it, and they proved that they could, because it was challenging. 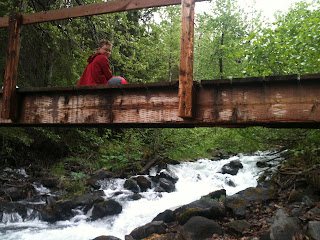 At some point we were all feeling pretty tired.  We'd gone 11 miles according to the odometer on Aurora's bike, and if we turned around we would have another 4.5 miles back to the trailhead.  We stopped and talked it over and agreed to go 30 minutes more OR a good spot to stop for lunch OR a view of the Upper Russian Lake (this was our real goal and hope).  Just 10 minutes after that we came across this bridge over a river that had a campsite near it.  It seemed like the perfect place to stop.

We made the kids eat a sandwich each.  It was difficult to eat because we were physically exerting ourselves and we didn't "feel" hungry, but I knew from experience that I was becoming mentally fuzzy, and on mountain bikes in mountains that is a dangerous state to be in.  As the week wore on I became more and more sensitive to not only my own symptoms of fatigue but those of others as well.  Certain signs would clue me off:  not being able to make it up small hills that normally we could, not drinking enough, making stupid judgement mistakes about maneuvering on the trail.  We kept reminding the kids to drink, drink, drink more water.  On this first day I knew food and water were issues because 10 minutes after we were back on our bikes heading to the trailhead my mind was clear and alert again.

It must have been more uphill than we realized because the ride back was fast and relatively easy, despite being tired.  All told we did 15.5 miles that day, and that final 1/2 mile was an amazing, fast adrenaline-pumping joy of a ride.  I was really proud of the kids for achieving that, and actually, I was proud of myself because I think that was the longest off-road biking ride I've ever done in my life too!  We'd seen lots of fairly fresh bear scat but no bears (something I was nervous about considering how fast we were going, and the fact Denver was in the lead and we weren't making a lot of noise).  It was a good start to our week!  And it was a sweet way to celebrate the day we arrived in Alaska 5 years ago!